How Trump Replaced America's Globalist Consensus With A Nationalist Sensibility 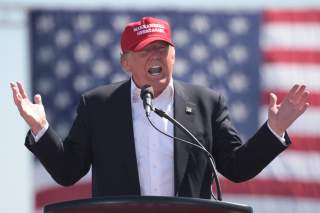 The old order of American politics crumbled on Tuesday with an election that signaled an inflection point in the nation’s history. Donald Trump’s victory, almost universally considered impossible until it happened, shattered the globalist consensus of America’s governing elite and replaced it with a nationalist sensibility exemplified in the slogan, "America First." Never in the country’s history has it seen an anti-status quo, anti-establishment politician of such force and effectiveness.

The globalist consensus contained a number of central tenets, all rejected by Trump. They included:

— We live in a unipolar world, with America at its center as an "indispensable nation" with an imperative and mandate to dominate events and developments around the world; spread Western-style democratic capitalism; and salve the hurts and wounds of humanity in far-flung precincts of the globe.

— The nation state is in decline and is being replaced by emergent multinational super-institutions such as the European Union, the United Nations and, presumably, Hillary Clinton’s proposed "hemispheric common market," with open trade and open borders.

— The demands of constituent identity groups, based mostly on ethnicity and gender affiliations, are more important than any concept of national unity.

— Borders have lost their significance as nationalist sentiments have receded, and while something probably needs to be done about illegal immigration, largely to assuage political pressures, there is nothing essentially wrong with mass immigration.

— Free trade is an imperative in the post-Cold War era of globalization to lubricate global commerce and spur global prosperity.

— Despite the advent of Islamist radicalism, fueled primarily by intense anti-Western fervor, there is no reason to believe that large numbers of Muslims can’t be assimilated into Western societies smoothly without detriment to those societies.

This globalist consensus was embraced by American presidents from Bush I to Clinton I to Bush II to Obama and then to Clinton II. It was so entrenched within the top echelons of American society—the federal bureaucracy, the media, academia, big corporations, big finance, Hollywood, think tanks and charitable foundations—that hardly anyone could conceptualize any serious threat to it. Then Trump attacked it and marshalled a rowdy following of people bent on upending it. The globalist sensibility won’t go away, but it now is seriously challenged. The result is a new fault line in American politics.

The Trump constituency rejects most of the central tenets of the post-Cold War consensus. Its beliefs include:

— The American experiment in national building, with an attendant propensity for regime change, has been an utter failure, particularly in the Middle East, and needs to be replaced.  America must be in the world but shouldn’t try to dominate it.

— Nationalism is a hallowed sentiment, tied to old-fashioned patriotism, and shouldn’t be denigrated or rejected.

— Identity group politics is eroding national cohesion and, through political correctness, is threatening free speech on the country’s college campuses; that threat will grow throughout society if not checked.

— Borders matter; countries without clearly delineated and enforced borders soon cease to be countries. Immigration numbers should be calibrated to ensure smooth absorption and assimilation.

— Free trade, as practiced in the post-Cold War era, is killing us, hollowing out the country’s industrial base and devastating its middle class.

— Islamist radicalism represents a serious threat to homeland security, and it is merely prudent, therefore, to consider adjustments in immigration policy as one tool in seeking to lessen the threat.

Clearly, a clash is inevitable between the post-Cold War elites and the Trump constituency. And its intensity was presaged by writer and thinker Shelby Steele in Tuesday’s Wall Street Journal. Steele traced the emergence over recent decades of the view that America was a "victimizing nation," tainted by its history, particularly slavery, its treatment of its native Indian populations, and its diminishment of women and minorities. This raised a perceived imperative, in the view of many, that the country must redeem itself from its oppressive past. This could be done, writes Steele, only through a kind of deference "toward all groups with any claim to past or present victimization."

But this call for deference assumed a moral high ground—and thus became a political weapon. From this moral position, the deference cadres could look down upon those who didn’t embrace the argument and stigmatize them as "regressive bigots." Writes Steele: "Mrs. Clinton, Democrats and liberals generally practice combat by stigma." He cites Clinton’s famous "basket of deplorables," those Trump followers who don’t embrace her view of America as victimizing nation. They are stigmatized as "irredeemable," subject to her sense of political correctness. "And political correctness," says Steele, "functions like a despotic regime."

Then along came Trump, a thoroughly non-deferential figure, "at odds with every code of decency," who "invoked every possible stigma" and rejected each with dismissive sneers. "He did much of the dirty work," writes Steele, "that millions of Americans wanted to do but lacked the platform to do."

It didn’t take long for the writer’s stigmatization concept to manifest itself in the coverage of Trump’s victory. The New York Times lead story, by Matt Flegenheimer and Michael Barbaro, revealed the dismissive bias explored by Steele. Trump, wrote Flegenheimer and Barbaro, won the presidency through a campaign "that took relentless aim at the institutions and long-held ideals of American democracy." The reporters predicted "convulsions throughout the country and the world, where skeptics had watched with alarm as Mr. Trump’s unvarnished overtures to disillusioned voters took hold."

Here we see the one-sided elitist view that the post-Cold War consensus and the imperatives of deference toward victimization, past and present, constituted the only proper outlook. Rejection of it, in this view, poses a threat to the very institutions and ideals of the republic. And certainly no concept of journalistic objectivity should get in the way of exposing such nefarious thinking.

But Trump revealed through his often Quixotic campaign that millions of Americans agreed with him that the real threat came from the country’s ruling elites of both parties who presided over national decline and economic inertia, failed to secure the country’s borders, got America mired in unceasing Mideast wars, and pursued trade policies viewed as harmful to the country’s middle class. He galvanized white working class voters and rural folks throughout the nation, even in traditionally Democratic states in the Midwest and Great Lakes region, such as Wisconsin, Iowa, Ohio and Pennsylvania. By 2:40 a.m. Eastern time, when Pennsylvania put Trump over the top in the Electoral College, the Republican candidate had flipped five major states that had voted for Barack Obama in both 2008 and 2012—Florida, Iowa, Wisconsin, Ohio, and Pennsylvania. In addition, Michigan and New Hampshire, also Obama states in the two previous elections, teetered between the two candidates as votes were counted late into the night.

Trump was particularly strong among whites without college degrees, expanding his margin of victory with this voter segment to nearly 40 percentage points from just 25 percentage points in 2004. Whites with college degrees remained with the GOP but by a much smaller margin than in previous years. Wealthy Americans shifted away from the Republican Party in significant numbers.

All this suggested the possibility of a serious realignment in American politics, with more wealthy voters (educated suburbanites, Country Club types, urban dwellers) moving toward the Democrats and with working class Americans (once the bedrock of the Democrats’ old FDR coalition) shifting to the GOP.

But the intensity of voter angst in this particular campaign year could be seen in some exit poll results. Responding to a question on what voters considered the most important issue, some 40 percent said they were animated primarily by a desire for change. Of those, 82 percent voted for Trump, compared to only 13 percent for Clinton. Two other question segments revealed a willingness on the part of many voters to overlook Trump’s personal shortcomings in the interest of getting the country on a new course. Among those who felt neither major candidate was qualified for the presidency, Trump garnered 69 percent. Among those who said neither had the temperament for the office, he collected 70 percent. In other words, when forced to choose between two unpalatable choices, a large majority considered Trump the least unpalatable.