How Trump Should Define Success in Syria 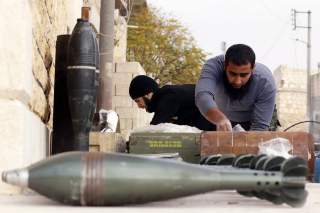 Give credit to Donald Trump for a moral clarity that eluded his predecessor about the Assad regime’s use of chemical weapons on innocent civilians. The president stood by his word and didn’t tolerate the Syrian dictator’s use of weapons of mass destruction. But while the recent strike on Syria was important and necessary—it was far from sufficient. The consolidation of Iranian and Russian military bases there is disastrous for the security of the U.S. and its allies. And the ongoing conflict, which Assad will not end anytime soon, fuels the global jihadi movement more than any other single factor.

It pays to review the origins of the conflict: In the full winds of the Arab Spring, the people of Syria stood up against one of the most brutal and oppressive Arab dictatorships with peaceful demonstrations. The Assad regime, however, chose a course of violence, suspecting rightly that without a decisive response it might go the way of Muammar el-Qaddafi’s rule in Libya. In the ensuing civil war, outside sponsors and Salafi-jihadi groups made their way to the Syrian battleground. Assad himself deliberately fueled the increase of jihadists in order to discredit the entire rebellion and hold the West hostage to his own survival. He released Al Qaeda members from Syrian prison and replaced them with peaceful protestors.

Iran stepped in early; its Hezbollah terrorist proxy essential to Assad’s survival. Soon Hezbollah was not enough, and Iran began to send its own soldiers—drawn largely from the Islamic Revolutionary Guards Corps (IRGC)—going so far as to mobilize Afghans, Iraqis and Pakistanis to save their Syrian crony. Even then, Assad could not stabilize the conflict, and Russia—invited by President Obama to “assist” with the elimination of Assad's chemical weapons—intervened on his behalf with airpower.

Far from bringing the war in Syria to a rapid close, Russian and Iranian assistance has produced a horrific, grinding, humanitarian catastrophe that shows no signs of ending. The astonishing brutality of Assad and his Russian and Iranian partners has radicalized the opposition. While the United States stood by, both ISIS and Al Qaeda captured and held ground, hijacking the originally secular Sunni Arab opposition.

This history contradicts those who suggest that Syria is vital to Moscow’s national security, and others who insist that once ISIS is gone, the future of Syria is irrelevant to America’s allies or interests. The Russian presence is mostly gain and little pain: Vladimir Putin has established the first major Russian military base in the Mediterranean since the end of the eighteenth century. The Salafi-jihadi movement is there and will be for as long as Assad rules, whether as ISIS, or son-of-ISIS, or Al Qaeda. And Iran and Hezbollah are there because without Assad at the helm in Syria, Iran will forfeit the critical anchor of its effort to build an integrated security architecture beyond its borders: a plan that allows for further force projection and domination. In short, there is no end to ISIS without an end to Assad. And there is no surer blow to the terror masters in Tehran than taking out their most vital Arab ally. Lastly, only expelling Iran from Syria will prevent an inevitable wider war with Israel.

We have written several times over the years about the imperative of removing Assad and restoring Syria to its people. In each case, however, there have been naysayers who have suggested that arming Free Syrians is tantamount to arming terrorists; that taking sides in the civil war risks conflict with Iran or Russia or both; or, most reprehensibly, that it is in America’s best interests to keep Assad in power. None of this is true, and there remains a path forward in Syria. But it requires a serious strategy, determination to carry it out notwithstanding objections from guardians of the status quo, and a genuine desire to deal with both Iran and Russia in a way that will cause them to think twice about other such adventures.

The first question any commander in chief must ask himself is what is his desired outcome? The best option is a Syria without Assad, committed to a future without Iranian or Russian influence. This is not a Pollyanna-like prescription; there are substantial obstacles in the way, not least those we have encountered in Iraq. It is not easy to shepherd a nation from tyranny towards a pathway to democracy. Only such a Syria can guarantee an end to Iranian interference, to the transshipment of weapons for Hezbollah, and to the proliferation of weapons of mass destruction of the kind we saw used at Douma (Iran has been instrumental in Syria’s chemical weapons program for many years). And most importantly, only such a Syria can disenfranchise the Al Qaeda and ISIS affiliates that have found a foothold by exploiting the Syrian people’s desperation.

How do we get there? The United States must first consolidate and strengthen its position in eastern Syria from the Euphrates river to the eastern Syrian border. This involves clearing out the remnants of ISIS, some several thousand, and ultimately eliminating pockets controlled by the Assad regime and the IRGC in north eastern Syria. This would enable the creation of a control zone in the East as a base from which to build a credible and capable partner that is not subordinate to the Kurdish chain of command, while effectively shutting down Iran’s strategic land bridge from Iran to the Mediterranean. A regional Arab force, reportedly suggested by Trump’s new national security advisor, would be a welcome addition. But we should seriously doubt they will participate without American ground leadership and air support.

In western Syria, the United States should rebuild a Syrian opposition force with advisers, weapons, and air power while upping the pressure on Assad and his cronies to select a pathway to a negotiated peace. Pursuing a settlement in Geneva without such leverage over the Assad regime is pure fantasy.

Finally, the United States and other western powers must impede Iran’s and Russia’s ability to be resupplied. Syria’s airfields must be destroyed, and Syria’s airspace must remain clear.

A campaign against Assad will help in gaining the support of Syrian Arab allies against Salafi-jihadi groups. Earlier efforts to build such support failed because of America's insistence that those we helped against ISIS refrain from fighting Assad. Even though these potential allies understood that Assad was the real existential enemy. The recipe for gaining allies among the Sunni, therefore, includes pushing back on Assad and the Iranians.

Yes, we will need some more troops on the ground in Syria. Thousands, not tens of thousands. They will face risks, as all our military does when defending our national security. And we will need to manage the concerns of our NATO ally Turkey, which has played both sides in the Syria conflict and neither wishes to enable Assad nor his Kurdish enemies who have so capably held Syria’s north. Ankara will need assurances that the United States will support Syria’s territorial integrity, as we have Iraq’s. Turkish president Recep Tayyip Erdogan will need to make a choice, and must know that the choice is between friendship with poor and oppressive regimes whose interests are deeply at odds with his own, or remaining a meaningful member of the strongest and wealthiest alliance in history.

There is a way forward in Syria, and Donald Trump has more than once had the courage to stand up to those inside and outside his administration who have urged retreat. Russia will not go to war over Syria. Iran is much more invested in Assad than Russia, and likely to put up a determined resistance if we are not serious and committed. But with a strategy which consolidates and strengthens moderates who reject jihad and tyranny, and engages our Arab regional allies, we can help Syrians win back their nation and turn the tide once and for all against ISIS, Russia, and Iran in the Middle East. Until now, no leader has tried. A leader with vision can try and succeed.

Gen. Jack Keane, a retired four-star general and former Vice Chief of Staff of the U.S. Army, is the chairman of the Institute for the Study of War.

Danielle Pletka is the senior vice president for Foreign and Defense Policy Studies at the American Enterprise Institute.

The authors are grateful to Jennifer Cafarella of the Institute for the Study of War for her invaluable expertise.