How Trump Should Dismantle the Iran Nuclear Deal 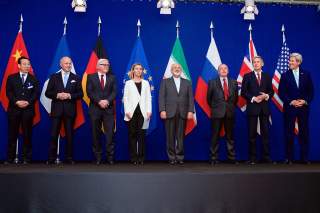 Of the countless Obama-era foreign policy missteps and mistakes, Donald Trump has reserved his strongest criticism for the nuclear deal with Iran. And rightly so. The agreement allows Iran to continue its research into advanced nuclear technologies and sunsets most restrictions in ten to fifteen years. Supporters of the accord argue that Trump should not reverse the deal because this would permit Iran to lift all curbs on its nuclear work. But many opponents also maintain that ending the agreement is impractical now that the accord has been in place for eighteen months. Both are wrong. The Iran nuclear deal can and should be dismantled in a gradual manner that takes into account the interests of American allies around the world and relies on Iran’s almost inexorable determination to continue its march to nuclear weapons.

There are reasonable worries today that conditions have changed since the Joint Comprehensive Plan of Action (JCPOA) was signed in July 2015. The multilateral UN sanctions have been largely removed. Iran can more easily purchase arms on the international market like Russia’s sophisticated S-300 air defense system, which Moscow delivered to Tehran last year. The majority of American sanctions are being waived, including the highly effective foreign financial institution sanctions that had compelled foreign banks to elect between conducting business with the United States or sanctioned Iranian entities, including the Central Bank of Iran. At the height of the sanctions regime, Iranian oil exports plummeted to 900 thousand barrels per day (bpd) but have tripled since the nuclear deal came into force and the EU restarted its own oil purchases from Iran. Tehran has gained access to at least tens of billion of dollars as a direct result of the nuclear deal.

But the benefits reaped by Iran thus far should not discourage dismantlement of the agreement. The genie can be put back in the bottle. This process must first begin with recognition of the status quo. Eighteen months ago, President Obama reached an accord with Iran surrounding the Islamic Republic’s nuclear program. The agreement remains in place today and is supported by many countries around the world for one reason or another. Some seek new economic opportunities in Iran. Others are American competitors that aspire to empower a fanatical enemy of the United States. Another group views the situation almost exclusively through the prism of its desire to tap Iranian energy resources. Many of them hold a misguided conviction that the only alternative is yet another conflict in the Middle East.

What above all defines the post-JCPOA status quo is the drastic set of changes made to the Iran sanctions regime. One year ago this month the nuclear deal came into force when the Obama administration certified that Tehran had complied with the JCPOA. In response, the United States is said to have lifted its sanctions against Iran, but Congress never withdrew its sanctions and most of the sanctions infrastructure statutorily remains in place. Much of the sanctions, therefore, were never formally lifted. President Obama was able to cease applying the Iran sanctions using national security exceptions that Congress typically writes into sanctions legislation to give the executive some degree of flexibility. These exceptions allow the president to waive sanctions indefinitely subject to sending periodic justifications to Capitol Hill. The remainder of U.S. sanctions was adopted under executive order and President Obama employed the same mechanism to remove them.

At the UN, the bulk of the Security Council restrictions imposed on Iran during six rounds of sanctions 2006-2010 were revoked. An important aspect of the JCPOA—where Western negotiators deserve credit, despite the agreement’s many flaws—is the process for re-imposing UN sanctions. Under the JCPOA, the United States or any other signatory can have all previous UN sanctions against Iran reestablished in mere weeks. A signatory initiates sanctions snapback at the UN by submitting to the Security Council notification “of an issue that the JCPOA participant State believes constitutes significant non-performance of commitments under the JCPOA,” triggering the Security Council to “vote on a draft resolution to continue in effect the terminations” of the sanctions. Unless the Security Council, where the United States has a veto given its permanent member status, affirmatively votes to retain the status quo and continue sanctions relief for Iran, all six rounds of UN Iran sanctions are immediately reenacted.

Once he enters the White House, Trump should begin to dismantle the nuclear deal, which legitimizes Iran’s nuclear problem and in several years time allows one of the world’s most dangerous regimes to securely pursue its nuclear capabilities. But there is a difference between starting the process of dismantlement and immediate withdrawal from the agreement. Trump must consider how to achieve this in an effective and sustainable way. He will have to work with our allies and to the extent possible take into account their interests. Whether discussing Israel, Central and Eastern Europe, or America’s Arab partners in the Middle East, Republicans have validly criticized President Obama for his failure to do just that. Now it is up to a Republican White House and Congress to reverse these mistakes. As he begins to unwind the Iran nuclear deal, Trump must ensure that U.S. allies are fully informed of his impending decisions and have ample time to adjust to the new conditions.

In order to bring U.S. allies along and safeguard America’s relations with many of its closest partners, Trump should act gradually and with clear justification. What this means is that he should wait for Iran to cheat—and cheat it will. In fact, Tehran has already been out of compliance with the JCPOA on numerous occasions since its implementation began. Most recently, the International Atomic Energy Agency (IAEA) declared in a November 2016 report that Iran had recurrently exceeded the 130-ton limit of heavy water used to moderate nuclear fission in its reactors and failed to sell surpluses on the world market as called for by the JCPOA. Three months prior, Germany’s domestic intelligence agency said in its annual report that Iran has pursued “clandestine” activities to seek prohibited nuclear technology and equipment from German companies “at what is, even by international standards, a quantitatively high level.”

And then there is the extensive pre-JCPOA history of Iran’s unwillingness to abide by pledges made to the IAEA, ignoring of requirements under numerous UN Security Council resolutions and its covert nuclear weapons work at facilities that were discovered but never declared. The best predictor of future behavior is past behavior, and the only thing Iran can be trusted to do is validate the accuracy of this statement.

As a result, Trump should wait for Tehran to predictably violate the JCPOA yet again. He should not, however, remain idle until then. President Obama often went out of his way to downplay or even suppress instances of misbehavior by foreign actors that conflicted with his narrative of success. It is quite possible that Iran is already in violation of the JCPOA in numerous areas, which the Obama administration has not disclosed. For this reason, Trump must begin the dismantlement process by conducting a comprehensive review of Iran’s compliance with the nuclear deal. He may very well discover that Tehran is already cheating.

Once cheating is firmly established, the Trump administration should first move to trigger the UN sanctions snapback, since these are mandatory multilateral sanctions that all countries must abide by. The United States can initiate this procedure by submitting to the Security Council a notice regarding Iran’s non-compliance with the JCPOA followed by a resolution on extension of sanctions relief. As a permanent member of the Security Council, the United States could then veto the resolution and guarantee the reapplication of UN sanctions against Iran in no more than six weeks.

The next step for Trump would be to reimpose the U.S. sanctions President Obama canceled through executive action. In theory Trump could take Obama’s executive orders 13574, 13590, 13622, 13645 and 13628 and reissue them verbatim within days using the International Emergency Economic Powers Act (IEEPA) and the National Emergencies Act (NEA). That could, however, produce needless tension with many U.S. allies outside the Middle East. These countries and their businesses with post-JCPOA equities in the Iranian economy should be given the opportunity to adjust to new conditions brought about by Iranian cheating and the resulting sanctions snapback. Since last January, some of these states have restarted imports of Iranian oil, which would require a grace period for them to wean themselves off. The next administration must provide America’s partners with the time needed to harmonize with an environment in transition from Iran accommodation to Iran rollback.

Finally, Trump should work with Capitol Hill to reenact Congressional sanctions against Iran. Since these sanctions were never formally lifted and remain in place statutorily, Trump could have the sanctions come back into force by simply ending his predecessor’s use of national security waivers. But the sudden reestablishment of these sanctions might also cause short-term challenges for American friends and allies, not to mention U.S. financial institutions. Rather than rapidly terminate the waivers, Trump should guide Congress to draft new sanctions legislation that would gradually reapply Congressional sanctions against Iran.