How Turkey Can Be a True Ally to Lebanon 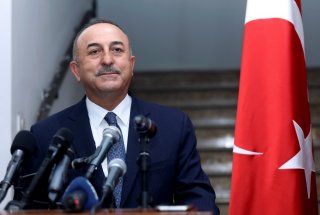 Turkey and Lebanon’s historically strong relationship has been overshadowed by geo-politics and regional rivalries, namely the Iranian-Saudi battle for influence in the Middle East. Nevertheless, Ankara has been making overtures to Lebanon in the form of aid and political support, and this can be felt most in majority Sunni areas.

Tripoli is Lebanon’s most impoverished area. Some reports show it as the poorest city in the Mediterranean, with the central government neglecting its responsibilities to look after the city’s inhabitants. Yet this aid has been conditional. After the recent diplomatic crisis between Saudi Arabia and Lebanon, Turkey’s Foreign Minister Mevlut Cavusoglu traveled to Beirut and told Lebanon’s highest-ranking officials that Ankara is ready to start a dialogue between the two nations, but also to exert its own influence with the Lebanese people in order to gain influence over Lebanon’s sectarian political system.

Across Tripoli, flags of the Turkish Republic and its President Recep Tayyip Erdogan can be seen on posters that say, “May God protect the leader [Erdogan] of the Arab and Islamic nation.” People in the majority Sunni city feel abandoned by Riyadh and have looked to the Turkish leader as their defender. Omar Mrad, a forty-one-year Tripoli resident who was one of the many people who put up the posters in the city, said he personally does not feel represented by Saudi Arabia. Back in 2013, Beirut leased two electric barges from a Turkish company, Karpowership, to be placed off the coast of the country, supplying nearly one-quarter of Lebanon’s energy demand. Although it temporarily shut down operations due to an expired contract and a delay of payments, the company resumed supplying electricity out of “goodwill.”

Ankara has also developed ties with Palestinian refugees and provided emergency aid through food, healthcare, and education through various NGOs. These resources have helped prevent famine but have also incited criticism from abroad.

Saudi Arabia’s state-run Al-Arabiya accused Ankara of facilitating the flow of arms through local NGOs to sympathetic groups in the city. One Lebanese intelligence officer spoke to Arabiya English and expressed concern following a Lebanese Army surveillance operation in Tripoli. These accusations were made more than a year ago and have not been independently verified. The Turkish government has not commented on these claims. However, if true, it would simply make Ankara another player contributing to Lebanon’s sectarian conflict and the misery of the Lebanese people. However, more recently, Turkey has worked to improve relations with Saudi Arabia and wants to use its leverage to mend ties between Lebanon and its former Gulf allies.

When Turkish foreign minister Cavusoglu met with his Lebanese counterpart, Abdallah Bou Habib, they discussed ways to strengthen their bilateral relationship by developing economic sectors such as tourism, energy, and agriculture and by resolving the diplomatic crisis with Riyadh.

"We have expressed our sadness over the recent crisis between Lebanon and the Gulf. We received information concerning the latest developments toward its resolution. And if there is anything that can be done for the issue to be resolved as soon as possible we are ready to carry it out," Cavusogly said during a presser with Bou Habib. Indeed, Lebanese politicians have shown a readiness to resume a state of normal relations with Riyadh and the other Gulf nations. However, recalibration of diplomatic ties must not mean Lebanese leaders should be let off the hook for corruption, nor should any international institution be forgiven for allowing years of economic mismanagement without any accountability.

Lebanon needs international partners willing to demonstrate solidarity during times of hardship, but a true friend must tell hard truths. Lebanon’s government is ultimately responsible for the breakdown in the nation’s economy and cannot be bailed out without serious reforms that include transparency for where any financial aid is being allocated. Otherwise, the vicious cycle of corruption will not be broken. If Turkey wants to be a true ally to the Lebanese people, rather than another cynical actor exploiting those in need, it must ensure any support given goes to its intended destination, without it predicated on geopolitics.