How to Turn Battleground Ukraine Into a Success Story 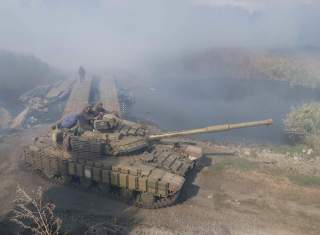 Putin’s early September suggestion that a UN peacekeeping force be sent to the Donbass region triggered a skeptical reaction from the Western block. To a certain degree, the Kremlin’s acceptance of the deployment of UN peacekeepers signifies a diplomatic victory of the West. Up until now, Russia has been persistently refusing similar proposals from Germany, France, the United States and Ukraine, insisting that peace in eastern Ukraine could be based solely upon Minsk agreement.

Now that Putin has taken a sudden U-turn regarding his former position, he also put forward several conditions that do not coincide with the Western vision. Instead of deploying UN forces on Russia-Ukraine border (thereby limiting the alleged traffic of weapons and soldiers that support pro-Russian separatists), the Russian president wants to limit their presence to the line of contact between Ukrainian and separatist forces so that they can provide security to Organization for Security and Co-operation in Europe officials.

Reaction to Moscow’s new strategy was predictable. First, in consultation with Washington, Kyiv insisted that the UN peacekeepers also be located on the border with Russia, claiming the participation of the Russian troops in such a mission was unacceptable. Second, former Secretary of State John Kerry expressed his doubts whether Putin’s agenda was truly sincere or if it simply presented “a trap.” Third, former ambassador to Ukraine, Steven Pifer, straightforwardly laid out his thoughts in the National Interest.

In his article, Pifer suggests subjecting Putin’s proposal to a certain litmus test, letting the jury out on whether the proposal is just another public relations ruse. The former ambassador writes that Putin’s original “proposal must be reshaped” by incorporating Western rhetoric, thereby discerning Russia’s hidden agenda. Everything becomes crystal clear should Putin rebut the “proper mandate” pushed forward by the West, according to Pifer. Instead of a politically elegant opt-out from the conflict with Ukraine in the wake of upcoming 2018 presidential elections in Russia, Putin wants nothing but to discredit the very idea of the UN peacekeeping operation. In other words, by not accepting a “worthwhile mandate,” and consequently making the West refuse the game against its rules, Russian diplomats will portray the refusal as a complete withdrawal of their counterparts from the negotiation table: the West does not want the mission, full stop.

Following Pifer’s logic, if Russia wants a “serious and robust mandate . . . that would advance peace,” then it should have no leeway but to allow the UN forces on its border as well as the entire region of Donbass. Well argued in its nature, this approach is fundamentally incorrect. Pifer entirely neglects the geopolitical interests of Russia and the way those interests are viewed from the vantage point of Kremlin. Conversely, a truly profound analysis would need to include an examination and understanding of Putin’s real goals and how they diverge from those he is often ascribed by Washington.

The whole idea of “testing Moscow’s sincerity” is reminiscent of the good old security dilemma. A brainchild of political science, it argues that invincibility of one State automatically implies vulnerability of the other and vice-versa. In the current context of the UN mission to Ukraine, this dilemma would take the following shape: While the idea of the mandate is supported by both sides, its form (suggested by the West) appears to Putin as unacceptable mockery just as the West find Putin’s proposal insufficient. The United States, Europe and Ukraine clearly distrust Putin, while Putin, in turn, distrusts them all at once.

Pifer’s narrative suggests that Putin’s proposal concerning peace in Donbass is not serious so long as it does not comply with the deployment scheme suggested by the West. This statement is also quite erroneous. Putin’s proposal is serious. The president of Russia does want peace. But his rules imply the conservation of non-bloc status of Ukraine. Additionally, the rules mandate that Ukraine cease its attempts to discredit Russia-Europe energy cooperation vis-à-vis Nord Stream II, bring the “Crimean question” to a close, remove sanctions, and, presumably, pay special attention and respect to the rights of the Russian-speaking community in Ukraine.

Should the Western proposal further pressure Russia to allocate the peacekeeping forces on its border, Putin is most likely to do the following: He will proclaim such a proposal as “offensive” and block the Security Council’s resolution, making the whole initiative sink under a new wave of diplomatic cut-and-thrust. That is why, in essence, Pifer’s idea to “test” Putin’s sincerity with an ultimatum-like proposal to also put peacekeepers on the Russian border would, in the real world, lead to the collapse of the initiative. It would, nevertheless, play into Putin’s hand as he has long been counting on bogging down the conflict while being totally opposed to an idea of welcoming the peacekeeping mission in Eastern Ukraine. According to unconfirmed insider information from the sources close to Kremlin, Putin was somewhat reluctant to make his proposal public. It was only at the urging of Minister of Foreign Affairs Sergey Lavrov that Putin agreed to seize a forever-cherished initiative of Ukraine and deliberately modify it so that it was repugnant both to Kiev and the West.

That is why instead of proving that “Putin had no serious proposal,” as Pifer’s reasoning suggests, following the latter’s strategy on Russia will fully satisfy Vladimir Putin. Instead of “testing” Moscow’s seriousness the West should take Putin at his word just like Putin did with John Kerry in 2013. The stance on Bashar al-Assad’s destruction of chemical weapons secured Putin’s victory: tactical, if not particularly strategic, as has become apparent over time.

Thus, it makes sense to frame the question differently. If the deployment of peacekeepers “only along the line of contact and . . . only to escort OSCE monitors” is what Putin wants, then give it to him. Immediately. Such a gesture will not alleviate the problem. However, it will foster the following advancements:

First, it will create a vision of positive dynamics. Second, it will set a precedent of successful cooperation between Russia, Europe and the United States, which would be particularly timely and relevant in light of the exacerbating Syrian crisis. Third, the parties to the conflict will be safeguarded from a situation that could escalate militarily and could, in turn, precipitate the fulfillment of Minsk agreement. Fourth, the situation will become more transparent, allowing the international community to obtain additional data, including information on the regional presence of Russian military and counselors. Finally, it will become much easier to expand (rather than build up anew) the existing peacekeeping mission.

To vanquish strategically, one often needs to take a tactical step back. By making a generous gesture towards Russia by accepting Putin’s proposal, the West will be in a position to continue the pressure, incrementally increasing the number of peacekeepers and pushing them to the border of Russia and, then, to the entire region. Such a procedure will be facilitated by new sensitive data (obtained directly by peacekeepers) on the Russian presence in Donbass as well as the upcoming results of the investigation on MH17.

The critical part of accepting Putin’s proposal without reshaping it lies in the potential positive impact from the deployment of UN troops. Appeasement of the Baltic States will allow Ukraine to focus on its economic reforms and combating corruption while keeping Kiev’s “hotheads” from conducting a new offensive on the East. Moreover, the peacekeeping mandate will help save the lives of civilians in eastern Ukraine who are so often neglected by Ukrainian military forces and pro-Russian separatist alike. Similarly, it will preclude the separatists from engaging in other raids and attacks.

Another inaccurate statement made by Pifer suggests that “Kiev has little to lose” should the current status quo be preserved. However, if the conflict “freezes” without UN troops setting foot on Ukraine’s soil, then there is a substantial risk of the renewal of hostilities and overall escalation of the conflict. At that rate, Kiev will not only lose the young men and women that it sends to the frontline, but it will have wasted its resources. By foregoing timely improvements of its economic system, Kiev will face a high opportunity cost, driving itself even further away from the European-style reforms.

If the West manages to talk Kiev out of any hasty ill-judged decisions and convince it to accept Putin’s proposal as it is, then the world will finally see a win-win. On the one hand, the West will acquire the platform for its future modus operandi, knowing from the very outset that military operations will become considerably harder to resume. On the other hand, Putin will strain himself in keeping his face even in a sour game, which is crucial to him because it is before the eyes of both the international community and the Russian people.

Reaching peace or even merely expanding the presence of peacekeepers will be a tough row to hoe. Nevertheless, it is much more rational to work with a concrete and doable proposal as the West’s “amendments” to the mandate, which could be tough for Russia to swallow. Turning potential cooperation into “mission impossible” will not be good for the West, Russia of Ukraine.