How to Turn Iraq into a Terrorist Playground 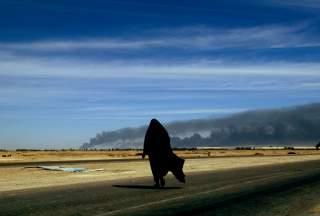 On January 25, popular Iraqi Shi’a cleric Muqtada al-Sadr submitted a bill to remove U.S. troops from Iraq. Qais al-Khazali, head of the Iranian-backed militia Asa’ib Ahl al-Haq, followed-up on January 28 by threatening that an impending parliamentary vote would oust U.S. forces from the country. Al-Khazali suggested that Iraqis take military action to force out the American troops if such a political initiative were to fail. Washington and Baghdad’s strained relationship took an additional hit over the weekend when President Donald Trump said U.S. troops are in Iraq to watch Iran, increasing Iraqi concerns that Iraq could serve as a battleground between the two.

Sadr and al-Khazali’s calls for the expulsion of U.S. troops are nothing new, but they are exacerbating already tense relations between Baghdad and Washington.  In September, U.S. officials threatened to cut aid to Iraq if the incoming government appointed Iranian-affiliated officials to high-level positions. In November, the Trump administration demanded that Iraq cut off Iranian energy imports as a condition for a limited waiver from secondary sanctions on Iran. Then, in December, Trump made a surprise visit to American military forces but failed to visit Baghdad or meet with lawmakers: a move Iraqi officials considered a snub to Iraq’s sovereignty.

Although security officials in Baghdad recognize the benefits that a small U.S. troop presence affords Iraq’s security and stability, widespread dissatisfaction with Washington among Iraq’s political elite could be the tipping point that pushes U.S. troops out of the country. The Trump administration needs to reevaluate its Iraq policy and commit to a strong bilateral relationship lest U.S. forces are pushed out and prospects for regional instability increase.

There are several reasons why a limited U.S. troop presence in Iraq remains essential. The vast majority of the Islamic State’s physical caliphate in Iraq and Syria has been destroyed, although, as the chiefs of U.S. intelligence agencies recently testified, ISIS is far from defeated. The group can still count on thousands of committed fighters scattered across Iraq and Syria as well as global networks of support. U.S. policymakers would be wise to remember that it was not long ago when many feared ISIS would conquer Baghdad. The crux of Trump’s Middle East strategy, containing Iran, would surely suffer if U.S. forces are expelled from Iraq. For a relatively low cost, U.S. military personnel can track the movement of Iranian proxies through Iraq into Syria and vice versa. The United States also provides critical support through training and assistance to Iraq’s professional security services. Most importantly, the United States helps train and support Iraq’s Counter Terrorism Service (CTS), otherwise known as the “Golden Division” for its professionalism and skill. Were the United States forced to withdraw its small number of forces from Iraq, the Trump administration would lose out on critical intelligence gathering capabilities and the infrastructure required to pursue terrorist cells and even hostile Iranian-backed militias, should they pose a threat to allied and U.S. diplomatic personnel.

Policymakers in the United States might rightfully question if a limited troop deployment in Iraq can offer more than band-aid solutions to Iraq’s deep institutional problems. It is true that the United States does not and in fact never did have the answers or means to solve Iraq’s fundamental problems. Yet a limited troop deployment goes a long way toward achieving mutual U.S.-Iraqi interests. For one, U.S. troops in Iraq, and in Syria for that matter, were never expected to provide the needed muscle to rebuild either country. What they can do is stabilize a volatile region, prevent worse outcomes such as an ISIS revival in Iraq (or a Turkish invasion in Syria), and create the space needed for governments to affect the underlying conditions, which allow groups like ISIS to proliferate. The Iraqi government has a long way to go toward improving those conditions—Iraq’s latest budget  proposal fails to provide sufficiently for reconstruction efforts—but a realistic expectation for Iraq to overcome these challenges should fall in the timeframe of decades, not years. The United States also needs to engage constructively in Iraqi politics, looking for common solutions to complex problems as opposed to conditioning its engagement based on how effectively Baghdad sidelines Iranian-aligned politicians: an unrealistic and unnecessary goal.

Some recent signs of progress further justify the continued American military presence in Iraq. The best indicator of the United States’ small yet significant success is the increased effectiveness of the Counter Terrorism Service. Built with the help of U.S. special forces to hunt terrorist groups and collect intelligence, the CTS was thrust into the heart of major operations to clear ISIS from northern and western Iraq. The CTS’s small size, professionalism, and specialized training allowed it to adapt to new roles and perform exceptionally well despite heavy losses against the Islamic State. Considering the importance of security sector reform in Iraq, and the challenges to reform that remain, the CTS stands as a noteworthy accomplishment and a sign that steady progress is achievable.

Indeed, the fact that Iraq remains capable of holding competitive elections after the devastating war against ISIS, and that relations between Baghdad and Erbil are steadily improving since the 2017 independence referendum, is remarkable considering the centrifugal forces that threatened to splinter the country apart at one time or another. In terms of security, Baghdad, once the epicenter of abhorrent violence during Iraq’s civil war, did not suffer a single car bomb in all of 2018.

A U.S. troop withdrawal from Iraq, following on the heels of an impending withdrawal from Syria, would be a major setback for the United States’ interest in regional stability. Failure to assure Iraq’s political leadership of the United States’ reliability as an ally and the utility of the Iraq-U.S. security relationship could bring with it disastrous consequences for Iraq and the broader region.

Christopher H. Brodsky is a research associate focused on Middle East politics and security at the Council on Foreign Relations.