How Ukraine Lost Its Investment Paradise 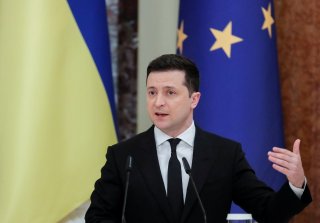 “Ukraine has to become the investment ‘Mecca’ of Central-Eastern Europe… This is the matter of our survival,” proclaimed Ukrainian President Volodymyr Zelensky at the Davos Economic Forum in January 2020.

A half-year before, Volodymyr Zelensky, young and energetic, decisively won the presidential elections. A self-made man from showbiz, a “guy like you” in his early forties, he seemed to personify the aspiration of Ukrainians for better governance and real reforms.

His appeal at Davos was the international confirmation of the open door policy for foreign investors that he had announced earlier, in Mariupol, a front-line industrial Ukrainian city. There, in the fall of 2019, Volodymyr Zelensky gathered a conference to meet with international businessmen and encourage them to trust his country, despite its reputation for oligarchs and corruption on the highest level.

No more corruption, he said, no more injustice—only fair play, rule of law, and a special tax regime for foreign direct investment (FDI). And even special “investment nannies” from the government to fix problems investors may face.

Time has passed and very few of those positive changes have happened. Moreover, according to a survey carried out by the American Chamber of Commerce in March 2021, lack of rule of law (66 percent), corruption (54 percent), and lack of bold reform agenda (45 percent) were identified by business representatives as the top-three biggest obstacles to doing business in Ukraine.

There is a long tradition in Ukraine of explaining away these problems as the hardships of a (seemingly endless) “transition period.” Meanwhile, some of those investors who have already trusted Zelensky and brought their money to this promising but unpredictable country look quite unhappy about their decisions.

The most recent case is TIU, a Canadian company that generates renewable energy in Ukraine. It has already invested over $65 million and built four solar stations there. Now the company is suffering from a raider attack on its assets. The bitter irony is that TIU Canada was among the main sponsors of both Davos’ Ukraine House and the Mariupol Conference where Volodymyr Zelensky announced his new era in Ukrainian policy. Even before that, TIU had got a special shout-out for its green energy efforts from the president at the July 2019 Toronto Ukraine Reform Conference.

In December 2019 TIU`s Canada received a letter from Nikopol Ferroalloy Plant that their solar station in Nikopol would be cut off from a substation, placed in the plant’s area due to scheduled repair works. Meanwhile, in a meeting with Nikopol Ferroalloy’s management, it was told that “repairs” were supposed to be endless and all the subsequent questions had to be discussed with the plant stockholders. In March 2020 the access to the grid was blocked, although Ukrainian legislation forbids such measures without bilateral consent.

In Canada, the United States, or European Union it would be a common “go-to-court” economic issue about a breached agreement. But not in Ukraine.

Unfortunately for the Canadians, the major stockholder of the Nikopol Ferroalloy Plant is Ihor Kolomoisky, an influential oligarch. Who, it is said, was a strong supporter of Zelensky’s election campaign behind the scenes. He is well known not only to Ukrainians, but to U.S. authorities also.

Kolomoisky is the target of FBI investigations, and the U.S. State Department has recently imposed sanctions, banning entry to the United States for him and his family members. The reason for sanctions is “significant corruption” Kolomoisky was involved in 2014-2015, when he held the position of the governor of the Dnipropetrovsk region, Ukraine. Where, by the way, Nikopol is located.

For a solar plant, being cut off from the grid means the enterprise is unable to produce energy and is forced to stop its 10.5 MW renewable generation. Kolomoisky has already met with TIU Canada and suggested he could buy the solar station for a “fair price.”

One need not be a strategist to recognize this two-move play, where technical restrictions are used to reduce the value of the asset, and the owners then pressed to sell it below market value.

Despite the fact that Zelensky promises to clean out corruption and tries to distance himself from the odious tycoon, Kolomoisky still holds sway over local authorities. And Ukrainian judges still protect their domestic oligarchs, rather than justice.

On January 26, 2021, the Kyiv Economic Court refused to consider TIU Canada’s claim against the Nikopol Ferroalloy Plant for impeding TIU`s access to the electricity grid. An appeal hearing is scheduled for April 12. The situation remains in limbo.

TIU Canada’s story is not unique, but, perhaps, the most vivid of those currently before the courts. A significant international investor feels uncertain about the ability to protect their funds. It appears that tens of millions of dollars in investments, the president’s good intentions, and even his personal word mean very little when foreign business bumps up against the interests of Ukrainian oligarchs—who continue shaping state policy more than any laws and agreements.

Seems something went wrong with reforms...again

Each newly-elected Ukrainian president comes in with a promise to fight corruption, limit oligarchs’ influence, and reform the judicial system, which is the basis for any positive transformation. Volodymyr Zelensky was no exception. Today, two years after winning the presidency, Zelensky has had some sectoral successes (digitalization, land reform), but made very poor progress on the top three confidence-killers. 75 percent of Ukrainians do not trust their own courts and a tiny pool of tycoons still determine too much of the country’s reality.

Ukraine’s failures look even more disappointing in comparison with other Central-Eastern European states that have achieved tremendous results since the Iron Curtain has fallen.

Maybe the reason is that Ukrainian presidents may realize the essential reforms, but content themselves with half measures. A really independent judicial system means that it would be impossible to pressure or influence courts, even for a head of state. Ukraine may stand out among its neighbors for the regular transition of power, but every new administration is tempted to prosecute its predecessors. In such a case, judges` loyalty may be perceived as an instrument of gaining political advantage and cementing power.

Meanwhile, the actual result is that, decade after decade, Ukrainian authorities fall into the same trap of keeping their system semi-reformed, leaving Ukraine in economic and social stagnation.

The most recent data speaks for itself: FDI flows into Ukraine’s economy decreased more than ten times, from $4.5 billion in 2019 to only $400 million in 2020. One may blame the Covid-19 pandemic and global turbulence. But the real reason is that Ukraine’s top echelon has been sliding back to corruption after short reboot attempts undertaken during fall 2019—winter 2020.

The new investment “Mecca” in Central-Eastern Europe has not happened despite President Zelensky`s flamboyant rhetoric. International business is like a club, where CEOs rely on their colleagues’ experience, not on roadshow promises. And they know that the best way to attract new foreign investors is to care about existing ones. Special preferences and “investment nannies” might be nice gimmicks, but the rule of law is crucial.

There is no better way to restore the luster of Zelensky’s image than the success stories of international business people who were brave enough to invest in Ukraine. The next appellate court hearing on TIU Canada’s case is scheduled for April 12. For the Ukrainian president, it would be extremely useful to keep track of cases where foreign investors are involved so as to understand the real situation with his promises. There is little doubt that the court’s decision will be a clear signal for other investors, either positive or negative.

Even in this period of heightened tensions, high-level contacts show that the world wants to believe in Ukrainian resilience and success. Therefore, a window of opportunity for Ukraine and Zelensky’s “new policy” still remains open. But, economically, chances are vanishing every day, with every surrender to oligarchs and every disappointed investor who loses his or her assets.

Oleksiy Honcharuk is a distinguished fellow at the Atlantic Council and the former Prime Minister of Ukraine (2019-2020). Follow him on Twitter @O__Honcharuk