How the United States Can Shape Africa’s Future 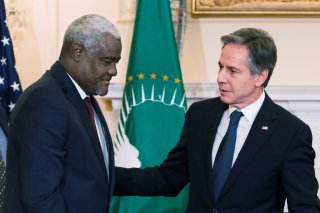 Africa faces threats to peace, security, and terrorist activity in the Democratic Republic of Congo (DRC) and G5 Sahel countries, as well as humanitarian crises such as the case of internally displaced people, and the refugee crisis in the DRC, Somalia, Central African Republic, and South Sudan. Other challenges that African countries experience include illegal immigration; political upheaval before, during, and after electoral processes; corruption; high rates of illiteracy; unemployment; and poor management.

For decades, the United States has been interested in assisting democratic transitions throughout the African continent. Sixteen African nations already have free-market economies and free elections, but the constant flux and threat of upheaval in some of them, as well as instability in neighboring countries, means the United States should not become complacent in its commitment. In November 2021, Secretary of State Antony Blinken, in remarks to the Economic Community of West African States, or ECOWAS, said that “we see across Africa a microcosm of what democracies can achieve—as well as the challenges that they must overcome” and emphasized three things in U.S. policy that align with this: using technologies to strengthen democracies, implementing policies to enforce fair and honest election processes, and holding leaders accountable.

In remarks at Howard University last year, Assistant Secretary of the Bureau of African Affairs Molly Phee said that partnering with African governments and society to promote good governance is one step in addressing the root causes of conflict, namely marginalization, exclusion, and lack of economic opportunity especially for youth, women, and minority populations. Corruption is also a major issue and hindrance to democracy. Phee stated that citizens’ trust in government is “eroded when leaders misappropriate public assets, engage in bribery, or undermine the rule of law,” which is the main idea behind anti-corruption measures that the United States is working to promote. The success of most initiatives in Africa hinges on democracy; without a solid foundation of democratic principles, governments cannot “unlock potential and prosperity for their citizens.”

There seems to be broad support for democratic governance among African populations. A 2019 survey by Afrobarometer found that, across thirty-four countries, 68 percent of citizens prefer democracy. However, only 43 percent are satisfied with the way democracy works in their country, meaning they do not experience what Afrobarometer calls an “adequate supply of democracy.” Thus, there is still room to grow and much space for the United States to become or remain involved. To maintain this prominent level of support, the United States must continue to listen to African civil society and reputable leaders to positively contribute to emerging democracies, rather than simply planting U.S.-specific seeds of democracy regardless of their efficacy.

Two specific initiatives exemplify tangible U.S. efforts to support good governance. The Young African Leaders Initiative was set up to assist young professionals to “spur growth and prosperity, strengthen democratic governance, and enhance peace and security.” The flagship program, the Mandela Washington Fellowship, has allowed over 5,000 African leaders between the ages of twenty-five and thirty-five to attend college in the United States and be provided with professional development support when they return home. Additionally, Biden will host the second U.S.-Africa Leaders’ Summit in 2022 to maintain and strengthen ties between the countries and promote active listening and collaboration.

Despite this support, upholding new democratic institutions is not easy. In Sudan, for instance, the military recently upset the government’s transition to democracy, and the United States has been perceived as being too soft on anti-democratic sentiment in the country despite clear civilian disapproval of the military takeover. Failing to support fledgling democracies could result in the United States undermining its position as a legitimate partner in critical issues of governance.

Moving forward, the United States should:

Work to promote national cohesion and unity in African countries to fight anti-democratic sentiment, corruption, and youth unemployment, among other issues.

Support and encourage the education system, especially in the northern regions. Educational support will allow the United States. to strengthen partnerships with major African countries, making it easier to promote good governance, leadership, and management skills for a new generation of African leaders.

Deal with the deadliest non-state armed groups in Africa, such as the Lord Resistance Army in Uganda and Boko Haram in Nigeria, to ensure African security.

U.S. foreign policy in Africa spans an incredibly wide range of sectors. The United States must continue to deepen and strengthen its connections, relationships, and commitments to the people and governments of Africa not only to further the interests of Africa and the United States but of the global population. Blinken captured this idea in his ECOWAS speech, declaring that the United States cannot expect to advance any of its global foreign policy interests without the support and partnership of African leaders and populations. He stated that “Africa will shape the future—and not just the future of the people of Africa, but the world,” and the United States should continue to aim toward collaboration and cooperation to help shape that future as well.

Dr. Dramane Chabi Bouko is a lecturer in international relations, peace, security, and geopolitical studies with a specific focus on Africa and China at the University of Parakou, Benin, and a Humphrey Fellow at the Maxwell School at Syracuse University.