How U.S. Policy Almost Ended Up Fighting Itself in Syria 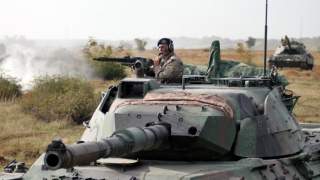 “Let me be clear, I have no idea what I’m doing,” read a meme posted online mocking Barack Obama on August 31. It was shared among supporters of the People’s Protection Units, the Kurdish group that has been fighting ISIS for two years in northeastern Syria. They were angry and accused the United States of “betraying” Kurdish forces and supporting a Turkish intervention that has now clashed with the Kurdish-backed Syrian Democratic Forces between Jarabulus and Manbij.

In the puzzle that is Syria, with its plethora of different groups fight against Bashar al-Assad, with Iranian and Hezbollah proxies allied with Assad, and the areas dominated by ISIS and Kurdish forces, the Turkish intervention around the city of Jarabulus has added a new element to a complex web of competing groups. For American policymakers it presents a particular problem because the United States is a close ally of Turkey and has worked with some Sunni Syrian rebel groups over the last four years. At the same time the United States has also cultivated a close, and very successful, relationship with the YPG in its war against ISIS. So how did America get to the point where its policy was described as “U.S.-backed Turkish offensive in Syria targets U.S.-backed Kurds”?

The origins of the conflict lie in the fact that the United States has two policies in Syria. Initially the U.S. policy was designed to support the opposition to the Assad regime. In Geneva in February 2014 John Kerry said the Assad regime was obstructing the peace process. “The opposition demonstrated a courageous and mature seriousness of purpose…they put forward a viable and well-reasoned roadmap for the creation of a transitional government body.” Viewing Assad as having lost the legitimacy to govern, the United States sought to work with “viable Sunni opposition groups,” as Hillary Clinton described them in a speech to the Council on Foreign Relations in November 2015.

The United States has cycled through a series of rebel groups that it hoped would help shore up “moderate” opposition to Assad. One group called Hazzm collapsed in March of 2015 after a year. State Department spokeswoman Marie Harf said its failure would “have an impact on the moderate opposition’s capabilities in the north.” Newsweek accused “U.S.-backed rebels” of fighting “alongside al-Qaeda,” a claim that dogged U.S. support for groups and its attempts at vetting those such as Division 13 and Fursan al-Haq.

With the rise of ISIS in 2014 and its victories in Syria, capturing Palmyra in May of 2015, the United States shifted focus to battling the ISIS threat. Assad was no longer the priority and thoughts at removing him were shelved. In testimony to the Senate Armed Services Committee General Lloyd Austin claimed only “four or five” U.S.-trained fighters were battling ISIS in September 2015.

At this point Defense Department, CIA and State Department policies began to diverge, and the Defense Department began to see the Kurdish YPG and its effective fight against ISIS as the best partner for the anti-ISIS coalition forces. If we look back at the fall of 2015 with the Russian intervention in Syria and the end of the ceasefire in Turkey between the PKK and the government, there was a clear transition point. The Syrian rebels were hard-pressed, and Turkey began openly saying that the YPG and PKK are both the same terrorist group in its eyes. The U.S.-YPG relationship was condemned by President Recep Tayyip Erdogan. In a June 2015 speech at the Ankara chamber of commerce he claimed “the West, which has shot Arabs and Turkmens, is unfortunately placing the PYD [the political wing of the YPG] and the PKK in lieu of them.” In December 2015 Kurdish forces captured Tishreen dam on the Euphrates, furthering angering the Turks who made it clear to the United States that the Euphrates was a “red line,” not to be crossed by the YPG.

In the spring of 2016, Syrian rebel group Fursan al-Haq, which had been reported as backed by the CIA, clashed with the YPG near the Kurdish area of Afrin. The L.A. Times reported that “Syrian militias armed by different parts of the U.S. war machine” were clashing. This gave too much credit to the “war machine,” whose influence was much diminished in that area. But this clash should have been the first sign of what was to come in Jarabulus.

Turkey’s relations with Syrian rebel groups were more effective than the United States, and it supported them to effect around Kilis, saving some groups from collapsing. However, after Turkey shot down a Russian warplane in November of 2015, there was real concern that any intervention might spark a war, and it wanted air cover for any operation. Instead Turkey began to seal its border with concrete blocks and supported rebels with artillery fire to move east from Kilis towards Jarabulus to close off the ninety kilometers of border where ISIS was active. At the other end of the border was Jarabulus on the Euphrates.

As Turkey was galvanizing rebel groups near Kilis, the YPG-backed Syrian Democratic Forces began an operation in May of 2016 to take Manbij, west of the Euphrates, in close cooperation with the United States. The Defense Department heralded the success of the operation in June. “In Syria operations to expel ISIL fighters from Manbij city and surrounding areas began May 30, with U.S.-led coalition forces operating in support of Arab counter-ISIL forces.” The DoD stressed that these were “local fighters” and the Manbij Military Council was an “indigenous Arab force.” These were indications that the United States knew the Turks refused to have Kurdish forces over the Euphrates. Pentagon spokesman Adrian Rankine-Galloway was quoted in Turkish media as saying the operation was “in accordance with commitments made between the U.S. and Turkey.”

Turkey was reeling from a coup attempt in July as the Manbij battles took place, but on August 9 Erdogan met with Putin, and it seems clear now that they discussed the operation in Jarabulus. Days later the SDF announced plans to set up a military council to rule Al-Bab and Jarabulus, both areas Turkey coveted for the Syrian rebel groups. When Turkish tanks, special forces and thousands of Arab fighters from Faylaq al-Sham, Nour al-Din al-Zinki, Sultan Murad, Division 13 and other units rolled into Jarabulus on August 24, the United States seemed to be taken by complete surprise. According to The Wall Street Journal, the Turks asked that U.S. special forces be embedded with the operation, but that the White House caution about having men so close with “al-Qaeda linked fighters in the area” would be a problem.

The United States couldn’t have been that surprised by Turkey’s actions. Turkish officials had been openly talking about a ground operation since March and creating a buffer zone from Jarabulus to Kilis. What surprised U.S. officials was that the offensive into Jarabulus moved so quickly to encompass the SDF which was operating a dozen kilometers to the south. “We have made it absolutely clear to the elements that were part of the Syrian Democratic Forces, the YPG that participated, that they must move back across the river. They cannot, will not, and under no circumstances get American support if they do not keep that commitment,” Joe Biden said twelve hours after the intervention had begun during his visit to Ankara.

John Kerry’s statement on August 26 in Moscow downplayed U.S. support for the Kurds. “We do not support an independent Kurd initiative. There has been some limited engagement with a component of Kurd fighters on a limited basis, and we cooperated very closely with – with Turkey specifically to make sure that there was a clearer understanding of the rules by which that engagement would take place.” He said that now that Manbij was liberated “there are other expectations of what will take place.” This left many Kurds and others perplexed. Limited engagement? After the Pentagon had heralded the YPG and SDF and the close cooperation so much?

Clashes increased between Syrian rebels and SDF as the Turkish-backed groups moved towards Manbij, the Pentagon press secretary Peter Cook said that “we are calling on all armed actors to stand down immediately and take appropriate measures to deconflict” on August 29. The Pentagon stressed that the clashes were taking place in an area “where ISIL is no longer located, between the Turkish armed forces, some opposition groups and units that are affiliated with the SDF.” The Pentagon was clear, the clashes were “unacceptable.”

The DoD was basically calling Turkey’s bluff that its operation was aimed at fighting ISIS in Jarabulus. ISIS had abandoned Jarabulus without a fight, after having fought house by house in Manbij (where there were hundreds of SDF casualties, including three U.S. volunteers with the YPG). There had been dozens of U.S. airstrikes to support the Manbij operation. ISIS spokesman Mohammed abu al-Adnani was killed on August 30 in an airstrike in al-Bab, evidence that while SDF was clashing with rebels, key ISIS targets were active nearby. On Wednesday the Twitter account of the Combined Joint Task Force Operation Inherent Resolve was welcoming “recent calm between the Turkish military and other counter-ISIL forces in Syria.”