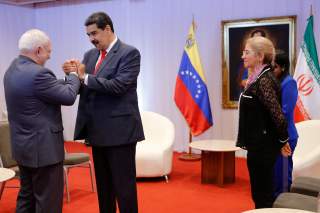 There is perhaps no tool in Washington’s foreign-policy toolbox used as consistently as economic sanctions. Banning an individual from entering the United States, freezing a company’s assets in U.S. jurisdiction or preventing a foreign firm from accessing the U.S. financial system is a simple and relatively easy thing for policymakers to do. Barely a week goes by when an entity isn’t put on the Treasury Department’s blacklist of designated companies. President Donald Trump is a particular fan of sanctions; the law firm Gibson Dunn reported designations increasing by close to 30 percent during his first year in office.

But there are times when sanctions are not only ineffective in forcing a change in a target’s behavior, but counterproductive to U.S. strategic aims. The restrictions on Iran and Venezuela, two of the administration’s favorite targets, are actually having an adverse impact on what Trump says is his most important foreign-policy objective: competing with Russia and China at a time when both nations are flexing their muscles on the international stage.

Washington’s decision this May to revoke oil import waivers for Iran’s consumers and its recent announcement this month of an embargo on the Maduro regime is tanking the economies of both. The formula is logical enough: with less Iranian and Venezuelan oil going into the market, the less money both regimes will be able to collect. This part of the equation is working according to plan. Tehran’s oil exports have winnowed down from 2.5 million barrels a day in April 2018 to what could be as low as one hundred thousand barrels per day last month. China National Petroleum Corp’s cancellation of five million barrels of Venezuelan crude, likely over concerns of exposure to U.S. secondary sanctions, will contribute to an already catastrophic economic and humanitarian situation for a country that has seen four million people flee to other parts of South America.

The long-term benefits of squeezing Tehran and Caracas’s finances, however, could be sunk by the costs. And the costs are quite significant; the sanctions are not only making life harder for the average Iranians and Venezuelans, but creating more opportunities for the Russians to fill a void in the market and further cementing its ties to the Chinese.

Although the Chinese economy has slowed down compared to its peak double-digit growth rate in years past, Beijing still requires large and consistent energy resources to empower industry across the board. While China is still purchasing crude from Iran and Venezuela, the Trump administration’s dual sanctions campaign is forcing the Asian superpower to depend far more on its large neighbor to the north for alternative supplies. Russia was China’s top crude supplier last year, with Russian sales increasing by 40 percent at a time when Beijing’s crude imports from Iran and Venezuela declined. Worldwide Demand for Moscow’s oil has gone up as supplies from the Iranians and Venezuelans have gone down; data from Bloomberg shows that between November and July—a period when the most onerous Trump administration sanctions were levied on Tehran and Caracas—Russia made $900 million more in revenue. For Russia, a country that suffers from anemic social services, horrible public infrastructure and an economy that may enter into a recession this year, any extra cash is a godsend.

National Security Adviser John Bolton may blast out tweets taunting Nicolás Maduro as a dead man walking, and State Department official Brian Hook may do the same on Iran, reminding anyone who will listen that Washington’s maximum pressure campaign is depriving the Iranian regime of billions of dollars in lost oil revenue. But if the dual pressure strategies on these two insignificant powers are freeing up buyers for Russia and solidifying a bond between Moscow and Beijing that both are becoming more comfortable in publicizing, one has to ask the obvious question: is penny-pinching the ayatollahs and bankrupting Maduro more important than preventing Washington’s two primary state adversaries from forming a unified anti-U.S. bloc? Given the principles outlined in the White House’s own national-security strategy about great-power competition in the twenty-first century and how critical it is for the United States to survive and prosper in this environment, the answer would appear to be “no.”

Daniel DePetris is a fellow at Defense Priorities, a foreign-policy organization focused on promoting a realistic grand strategy to ensure American security and prosperity.