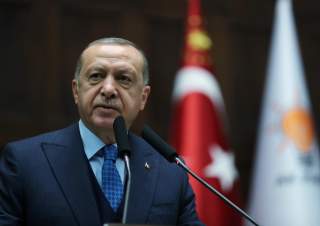 The United States is preparing to withdraw troops from Syria, which would be an unprecedented reversal for U.S. policy. Just two days before President Donald Trump made the momentous announcement, U.S. Syria envoy James Jeffrey described Syria as relatively peaceful and noted that the lull in tension provided the United States with a brief opportunity for diplomacy to work its magic. Jeffrey, the Special Representative for Syria Engagement, is entering his fifth month on the job as Washington’s main problem solver for Syria—particularly the unprecedented role that the United States is playing in eastern Syria. A few days prior to Jeffrey’s public musings over peace and diplomacy in Syria, President Donald Trump called Turkish President Recep Tayyip Erdogan to try to prevent Turkey from launching an offensive into eastern Syria—one that would create a major crisis with key Kurdish partner forces. It now appears that during that phone call Trump decided to end the U.S. involvement in eastern Syria, casting doubt on Jeffrey’s mission and statements.

As American troops withdraw and Trump attempts to coordinate his policy with Ankara, it is possible to examine the changing Washington policy in eastern Syria by concentrating specifically on Jeffrey’s developing role. For example, Jeffrey, speaking at the Atlantic Council on December 17, sought to articulate how the United States is balancing its relations with Turkey amid Ankara’s accusations that the United States is working with “terrorists” in Syria. At the time of his talk, it didn’t appear he had been briefed on President Trump’s changing views on U.S. involvement in Syria and the president’s subsequent decision to withdraw.

He pointed to the People’s Protection Units (YPG), a key component of the Syrian Democratic Forces (SDF), as the Syrian version of the Kurdistan Workers Party (PKK). Turkey’s President Recep Tayyip Erdogan said on December 18 that Ankara would not allow a “terror corridor” to be established along its border. Fifteen thousand Syrian rebels that had originally signed on to oppose the Bashar al-Assad regime now say that they would back a Turkish offensive into eastern Syria where U.S. forces are present. Jeffrey said that the SDF, like some of the United States’ previous partners who opposed Saddam Hussein in Iraq, is a tactical and transactional relationship. His description of the relationship indicates that the United States had a temporary partnership with forces in Syria that have played the major role in defeating ISIS. As the United States walks away from that partnership, it could appear as if it is betraying a group that helped it to destroy ISIS, which would harm the already strained image of the United States in the Middle East region.

Secretary of State Mike Pompeo tapped Jeffrey, a thirty-five-year veteran of the U.S. Foreign Service, in August and asked him to lead U.S. diplomatic efforts in Syria. Jeffrey was ambassador to Iraq from 2010 to 2012 and ambassador to Turkey 2008 to 2010, so he has unique knowledge of the region and its leaders. Jeffrey was tasked with addressing the growing U.S. commitment to eastern Syria and ensuring that the region is stabilized once the Islamic State has been defeated. Such an undertaking would involve working with Syria’s neighbors and promoting peace as envisioned by the Geneva peace process and UN Resolution 2254.

The appointment appeared to bifurcate the work that the United States was doing in Syria. U.S. Special Presidential Envoy for the Global Coalition Against ISIS Brett McGurk would continue his work on the anti-ISIS agenda and concentrate on Iraq while Jeffrey took up more of the Syria portfolio. McGurk resigned as the anti-ISIS envoy after Trump’s announcement and after U.S. Secretary of Defense James Mattis resigned on December 20. However, back in September, the changing roles of the two policymakers came in the context of the September 11 launch of the final phase of Operation Roundup, which aimed to defeat ISIS in the Euphrates valley around Hajin. The operation cost ISIS control of most of Hajin—a success that was hailed by the media in the second week of December.

“Jeffrey will work closely with the under secretary of state for political affairs, once confirmed, as well as the Near Eastern and European bureaus on this issue. Given all the countries and the issues involved, from terrorism to refugees, these matters obviously cut across geographic bureaus, and therefore this requires a high level of coordination,” said State Department Spokesperson Heather Nauert.

The problem with America’s Syria policy is that it had too many different agendas and some of them are contradictory. For instance, the Trump administration wanted to stabilize eastern Syria after ISIS has been defeated. That would require training local security forces. These forces are linked to the SDF, which Turkey has described as a “terror army.” Turkey vowed to “crush” these stabilization forces in January 2018 on the eve of Ankara’s offensive into Afrin and remove the YPG from the border. Afrin, a Kurdish region in northwest Syria where the United States is not present, was a test case for Ankara and provided valuable experience that will help it to accomplish its goals in eastern Syria.

Jeffrey had to immediately juggle these threats while focusing on the role of Russia and Iran in Syria. He traveled to Israel and met Prime Minister Benjamin Netanyahu with whom he discussed the importance of “maintaining Israel’s security while countering Iran’s destabilizing activity throughout the region.” Then he and Joel Rayburn, Israel’s deputy assistant secretary of state for Levant affairs and special envoy for Syria, visited Jordan and Turkey. In September the State Department was trying to prevent a Syrian regime offensive in Idlib that could create a wave of refugees flooding into Turkey. Turkey signed a deal in mid-September with Russia to prevent the offensive. As part of the deal, extremists in Idlib would withdraw heavy weapons and Turkey would increase its presence. Problem solved, for Turkey.

In Ankara, the American diplomats underscored “the importance of continued U.S.-Turkish cooperation in resolving the Syrian conflict in a manner consistent with UNSCR 2254,” according to a statement by the U.S. Embassy and Consulates in Turkey. Jeffrey spelled out U.S. opposition to the Syrian regime’s threats against Idlib. “He commended the Turkish Government and people for their continued compassion for those affected by the Syrian conflict,” according to the statement. But Jeffrey appears to have missed an opportunity to discuss eastern Syria. In late October he traveled to Manbij in northern Syria and met the local SDF-linked military council. The United States has conducted patrols around Manbij to prevent any escalation with Turkey or Syrian rebel groups. This came as Saudi Arabia sent its first $100 million of support for stabilization in Syria. At the same time U.S. Army Gen. Joseph Votel said U.S.-Turkish joint military patrols would begin around Manbij. Turkey appeared to hope these joint patrols would be a prelude to greater Turkish involvement.

“What we’re looking for is the enduring defeat of ISIS, a reinvigorated and irreversible political process in Syria led by the Syrian people and facilitated by the UN, and de-escalation of the conflict that will include all Iranian-commanded forces departing from the entirety of Syria,” Jeffrey said in Washington in November. He also indicated that the United States saw its mission against ISIS as indirectly supporting “other goals,” and that affecting Iran’s “malign activities” was one of them. Washington has been describing a growing strategy in eastern Syria based on military and economic tools. “On getting Iran out, that is basically part of a process. It’s not a military goal of the United States, it’s not a mission of U.S. military forces; rather, we see this as the outcome of process that would end the internal conflict and provide guarantees to the Syrian people and the neighbors towards their security,” he said. Jeffrey said there were now “three strategic goals in Syria. We don’t see why it is in the interest of anyone to have Iranian forces, particularly power-projection forces—long-range missiles and other systems that can threaten other countries—present in Syria if we have resolved the underlying conflict. And it’s our job to convince everybody, including the Russians, that that’s the best way to secure a peaceful result and stability and security, not just in Syria but in the region, and we’ll keep on working until we achieve that.”

The crisis in December between the United States and Turkey developed out of a growing collision course between Washington and Ankara over eastern Syria. On December 12 Erdogan asserted that there was no longer a threat from ISIS while the United States and its SDF partners continued fighting ISIS in Hajin. Turkey has shelled the border area and the SDF has said it will halt operations if the United States cannot prevent Turkey from shelling SDF and YPG positions. To placate Turkey, U.S. Deputy Assistant Secretary of State Matthew Palmer announced a $5 million bounty for the leader of the PKK, Murat Karayilan, and multi-million dollar bounties for two other leaders. Jeffrey also said that the PYD, the political wing of the YPG, was the Syrian branch of the PKK. Jeffrey was intimately aware of past U.S. cooperation with Turkey, providing Ankara with actionable real-time intelligence to strike at the PKK in the past. So he understood Ankara’s concerns and emphasized the importance of Turkish-American cooperation. But Washington has not found a formula to deter Turkey’s actions.