How Vietnam Can Stop the South China Sea ADIZ 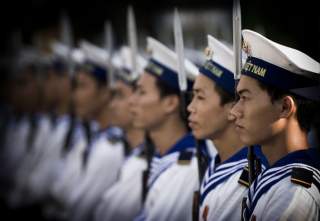 What is China’s next big move in the South China Sea? Ask the experts this question and tally their predictions. The action that will get the most votes is likely to be the imposition of an air defense identification zone (ADIZ). Indeed, a widespread view among the South China Sea watchers is that China will sooner or later declare an ADIZ in this semi-closed maritime domain, where it has reclaimed thousands of acres of land to build long airstrips, high-frequency radars, stationed combat aircraft and long-range missiles.

This view is undergirded by two assumptions. The first is that Beijing is willing to accept high costs, while an ADIZ will bring enormous benefits to China. The second assumption is that there will be a moment when circumstances raise either the costs for China’s rivals to retaliate, the benefits for China to impose an ADIZ, or both. Consequently, declaring an ADIZ is a matter of timing, as China is waiting for the opportunity that maximizes the cost-benefit ratio of this action.

From this perspective, the idea of an ADIZ is particularly attractive when the hands of China’s rivals are tied or when an ADIZ can prevent or compensate for some of China’s anticipated losses. Such an opportunity is looming large in these months as the Permanent Court of Arbitration in The Hague is expected to reject China’s nine-dash line, the central basis of Beijing’s maritime claims in the South China Sea. Not only can an ADIZ fill in an important part of the legal vacuum that will emerge if the nine-dash line is widely believed as illegal; an ADIZ can impose more restrictions than the nine-dash line. Adding to this estimation is a recent report citing sources close to the Chinese military as saying that China is preparing an ADIZ in the South China Sea.

What might be the reaction of key players to China’s South China Sea ADIZ? As a non-claimant, the United States has limited options. In a similar way to its actions against China’s East China Sea ADIZ two years ago, Washington can send its bombers and fighters to the area to register its rejection of China’s decision. Washington can also deploy more assets to the region, increase the number of its patrols and dispatch its vessels and aircraft closer to the Chinese-held islands. But even if the United States could triple its military presence from the current level of seven hundred trips a year, this would still be no match to the hundreds of Chinese armed vessels that are the region’s permanent residents.

The Philippines has few options left after already having used some of its strong cards. Manila has launched a legal action against China in the Permanent Court of Arbitration, and it has allowed Washington to use five of its air and land bases. If China imposes an ADIZ, however, the Philippines and the United States can upgrade their Enhanced Defense Cooperation Agreement, and add the three naval bases initially offered by Manila but not taken by Washington to the list of places that can be used by U.S. rotational forces. Two of these three are Naval Station Carlito Cunanan in Ulugan Bay on the western coast of Palawan Island and Naval Station San Miguel in Zambales Province. While Carlito Cunanan is the major naval base closest to the center of the Spratly Islands, San Miguel is the naval base closest to Scarborough Shoal. These two bases can immensely enhance the U.S. Navy’s ability to respond to contingencies in the South China Sea.

Malaysia and Vietnam can follow in the Philippines’ footsteps and take China to court, as well as grant Washington more and better access to their naval and air facilities along the South China Sea coast. In this regard, Vietnam has far more potential than Malaysia to make China hesitate to declare an ADIZ. While Malaysian bases such as Labuan and Bintulu lie in the far south, Cam Ranh Bay and Da Nang on Vietnam’s central coast offer the best locations to neutralize the effects of China’s artificial islands in the Spratlys and Paracels.

And with its longer and more impressive record of China’s aggression in the South China Sea, Vietnam can put enormous pressure on Beijing if it files a lawsuit against its giant neighbor. Although Hanoi shied away from suing China in the past, a Chinese ADIZ that impinges on Vietnam’s airspace can be the straw that breaks the camel’s back. Commenting on a possible Chinese ADIZ in the South China Sea, Vietnam’s top defense diplomat Gen. Nguyen Chi Vinh said that it would be “more dangerous than even the nine-dash line” and it would “kill” Vietnam.

Finally, the Philippines, Malaysia and Vietnam can declare their own ADIZ to reciprocate against China’s. This in-kind response is politically more feasible than granting the United States access to bases and launching a legal action against China. The legal action requires that Vietnam and Malaysia have exhausted other diplomatic means. Domestic and ideological concerns in both countries are likely to limit the access granted to Washington to an extent insufficient to deter China. But even a combination of a Malaysian and a Philippine ADIZ would not really hurt China. Poor enforcement aside, they would not change the basic terms of the bargain with Beijing.

Contrarily, a Vietnamese ADIZ that covers the Paracel Islands could cause the damage that China would rather avoid. While China acknowledges a dispute over the Spratlys, it denies any dispute over the Paracels. A Vietnamese ADIZ, although not a territorial claim itself, and likely to be poorly enforced, can create some sort of Vietnamese administration over the Paracels, something that China has eliminated since 1974. What’s more, it can also provide a legal basis for Vietnam to carry out actions that can be interpreted as exercising sovereignty over the islands.

The above analysis shows that China’s ADIZ in the South China Sea is not a matter of timing; rather, it critically depends on how China’s rivals will react to it. In this game of poker, the United States, the Philippines, Malaysia and Vietnam hold some strong cards, though China can also up the ante. Some of the most formidable cards lie in Vietnam’s hands. Imposing an ADIZ over the Paracels and granting U.S. forces regular access to some strategic places on Vietnam’s Central Coast can be game changers. If credibly signaled, they can deter China from declaring a formal ADIZ in the South China Sea. But Beijing can bet, for good reasons, that Hanoi (and Washington) may regard them not worth the risk. In any case, decisions in Hanoi can switch decisions in Beijing.

Alexander L. Vuving is Professor at the Daniel K. Inouye Asia-Pacific Center for Security Studies. The views expressed in this article are his own and do not necessarily reflect those of the U.S. government, the Department of Defense or DKI-APCSS. He tweets @Alex_Vuving.