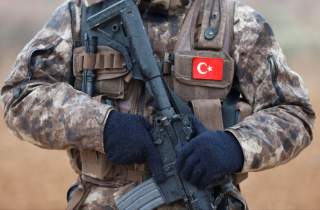 Amid much fanfare, Turkey launched a military incursion into the northwestern Kurdish enclave of Afrin over the weekend. Mosques across the country held special “conquest” prayers for the victory of the country’s military. The Ottoman military band, Mehter, performed in the border provinces as a show of support for soldiers taking part in the operation. After the country’s top cleric’s call, thousands across the country gathered in mosques to pray for the servicemen. The opposition, except for the pro-Kurdish HDP, has all lent full support to the operation. Many Turks see it as a historic opportunity to write the wrong of Western efforts to establish a Kurdish state. They think the operation will prevent the Kurds from reaching the Mediterranean and bring peace to the “oppressed people” of Afrin. Nevermind that despite the fanfare, it is a limited push into the outskirts of the city or that the United States has no presence in Afrin or that it is practically impossible for the Kurds of Afrin to reach the Mediterranean or the operation is likely to ignite Arab-Kurdish conflict let alone bring peace and stability. For the Turks, the “second war of independence” is raging in Afrin. And with that, President Erdogan has already achieved the real aim of the operation: galvanizing the nationalists ahead of critical 2019 elections.

But moving ahead might be less smooth. The operation poses serious dilemmas for Turkey. Turkish officials said the aim of the operation was to create a nineteen-mile-deep zone inside Syria, which can be used as a safe area for civilians. The zone is likely to be secured and administered by Turkey’s Syrian rebel allies. Turkish president Erdogan vowed that after establishing the safe zone, the campaign would root out the Kurdish militias and rebuild infrastructure and democratic institutions.

Afrin is a majority Kurdish enclave. It is a mountainous terrain. Any attempt to dislodge the Kurdish militias will face well-armed, battle-hardened YPG fighters. Administering the zone and building institutions are likely to be even more challenging in a region where locals oppose Turkish troops and its proxies.

There are other complicating factors. Russia, Iran and the Assad regime are all troubled by the recent U.S. announcement that it expects to have a long-term presence in Syria. They view Turkish incursion as a way to weaken the United States’ Kurdish allies and curb U.S. influence in Syria. Thus, Russia, which has troops in Afrin and controls the skies over the region, has given Turkey the green light to mount the attack. Iran called on Turkey to halt the operation but Tehran, too, failed to issue an outright condemnation. Despite public condemnation, the Assad regime also acquiesced to the attack. But none are likely to tolerate a long-term Turkish presence inside Syria. The more likely scenario is that the areas captured by Turkish forces will be handed to the Assad regime.

This puts Turkey in an awkward position. Although Turkey has quietly dropped its demand for regime change in Syria and gradually scaled back its support for the opposition, in rhetoric, President Erdogan is still fiercely anti-Assad. As recent as last month, he called the Syrian president a terrorist and said it was impossible for Syrian peace efforts to continue with him. At least three soldiers have been killed in the Afrin operation. Handing over territory to the Assad regime that Turkish soldiers died for is a difficult sell—even in a country where media is almost entirely under the control of the government.

The Turkish president also vowed to push on from Afrin to Manbij, where U.S. forces and their Kurdish allies against the Islamic State are on the ground. That raises the possibility of a conflict between Turkish and U.S. forces. Considering Turkey still allows the United States to use Incirlik Air Base to support the YPG operations against the Islamic State, one might think that Ankara will not go as far as risking a military confrontation with its NATO ally. But Erdogan boxed himself in. Walking back the strong statements about the Manbij operation will not be easy if Ankara does not get anything tangible from Washington.

The United States, for its part, is trying hard to prevent a potential Turkish operation into Manbij. Until now, Washington managed to walk a fine line between working with the Kurdish militia and preventing a complete breakdown in its relations with Ankara. But the small northern Syrian town of Manbij is likely to put an end to the United States’ balancing act. If Erdogan delivers on his threat to move into Manbij, the United States will be forced to pick a side. It will either significantly scale down its support to its Kurdish allies or risk a military confrontation with its NATO ally. The stakes are high. The United States is, therefore, trying to find a middle ground before a potential Manbij operation. Secretary Tillerson said that the United States is discussing with Turkey the possibility of setting up a security zone on the Syria border to address Turkey’s concerns about a Kurdish enclave there. But Erdogan is not known for favoring middle ground. The recent announcement that the United States is planning to maintain a long-term presence in Syria raised eyebrows in Ankara. Erdogan knows full well that that means further U.S. engagement with the Syrian Kurds.

Turkey’s recent military incursion into Afrin will be a test case in many ways. Manbij is a critical juncture in a long-strained Turkey-U.S. relations. Afrin will test Turkey’s cooperation with Russia, Iran and the regime in Syria. But most critical of all, the operation into Manbij will show how much Erdogan is willing to risk in order to secure a nationalist alliance at home and win the critical elections in 2019.