How Warriors Can Study Their Craft from the Stage 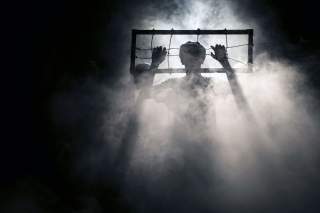 Defense Secretary Jim Mattis, in his recently published National Defense Strategy, declared that professional military education had “stagnated.” He called for more intellectual leadership, a deeper knowledge of history, and more ingenuity. So here’s a suggestion for Mattis: send your officers to the theater.

This isn’t as unorthodox as it sounds. Drama and history have a time-honored place in military academies. Thucydides’ account of the Peloponnesian Wars, with its soaring funeral oration, is often required reading. Sophocles’ plays Ajax, in which a returned warrior commits suicide, and Philoctetes, featuring an injured archer abandoned on an island, resonate for new generations of warriors thanks to the Theater of War project led by Bryan Doerries, who has made it his mission to stage versions of these plays for returning veterans.

But all too soon, officers in the academies put aside their Greek tragedies to tackle daunting reading lists, ranging from Sun Tzu to Clausewitz and every major strategic thinker of the modern era, crowding out any further thought of history, poetry or drama, however relevant. And that’s a shame, because if Mattis really wants to shake off the stagnation, he need look no further than Broadway.

Last year’s Tony Award–winning play Oslo would be a good place to start. While the rest of the world swoons over Hamilton, this unlikely drama about diplomacy shows how an unassuming Norwegian made himself and his diplomat wife a backchannel for Israelis and Palestinians. The play offers an inside look at what negotiations are really like. The participants at the table meet, storm off, tell jokes, eat waffles and can agree (if on nothing else) that the cook is an angel. At one point they dance.

The play is not as fanciful an account as one might think. Oslo playwright J. T. Rodgers spent more than two years reading negotiating documents, interviewing the participants and researching. In his introduction he wrote, “The further I dug, the more gripped I became as a dramatist. Here was the stuff of theater—events that were almost preposterous in their strangeness: clandestine meetings, often run by those who had no experience with such things; people’s lives constantly put at risk; governments threatened with calamity; emotions rising and falling at an operatic scale; people pushed to the brink of what they thought possible as friendships were fused and torn apart.”

Here also was the stuff of war. Not munitions, tactics or technologies, but rather people struggling with the conflicted emotions of enmity, unclear intentions and a willingness to risk all for peace. Such matters ought to be core curriculum. Soldiers must understand the psychology of hatred, how it shapes conflict and how dealing with it adroitly makes peace possible. In an early scene, Oslo gets this right. The lead character, Terje Larsen, dismisses the objections of the Norwegian foreign minister by saying, “Johan Jorgen, you don’t make peace with the people you have dinner parties with. You make peace with the people who bomb your markets and blow up your buses.”

Rogers aimed to make his play not only the stuff of theater and the stuff of war, but also the stuff of life. In his introduction, he continued, “As a playwright, I look to tell stories that are framed against great political rupture. I am obsessed with putting characters on stage who struggle with, and against, cascading world events—and who are changed forever through that struggle. While journalism sharpens our minds, the theater can expand our sense of what it means to be human.”

That sense of being pitted against cascading world events should sound very familiar to military officers and diplomats alike. What could be more fundamental than understanding the human activity of what it means to go to war, to avoid going to war, and the erratic and uncharted process of ending war?

The play Oslo is no fluke, although its box-office success and 2017 Tony Award for best play are impressive. Oslo follows an array of recent works that draw on international conflicts and negotiations that speak directly to the tasks of America’s military and diplomatic leaders. As other international-affairs agencies, including the State Department, dwindle in size and influence, it will be America’s military that may well find itself engaged with adversaries not only on the battlefield but at the negotiating table. Plays based on recent headlines and real-life scenarios help imagine how that might work.

While Rogers speaks of sitting down with adversaries who “bomb your markets and blow up your buses,” playwright Lee Blessing offers audiences a more sophisticated adversary. A Walk in the Woods features the lead U.S. and Soviet arms-control negotiators, and Blessing gives the Russian, Andrey Botvinnik, the charm edge over the humorless American, John Honeyman. They discuss the difficulty of keeping the talks real. Botvinnik says, “We should put the table at the bottom of a missile silo. Then we would negotiate. I have seriously suggested this to my superiors.” Throughout the play it is Botvinnik who exudes imagination, whimsy and flights of fancy. He discomfits his counterpart Honeyman with his talk of their “friendship.” The characters explore the philosophical fallacy underlying arms “control,” in a world in which each side constantly develops new weaponry. In the second act, Botvinnik complains:

“Look at these treaties, John. They aren’t treaties—they’re blueprints. We determine what weapons we’ll build in the next few years, then agree to let each other build them. We get rid of small systems so that we can keep bigger ones. We trade obsolete technology for state-of-the-art, we take weapons out of Europe so we can put up new ones in space. Then we say to the world, ‘See? We are capable of restraint. Here is a small step forward.’ It is laughable.”

Botvinnik’s diatribe against deterrence gives military officers, who deal with weaponry on a daily basis, a glimpse into the world of those trying (and often failing) to inject rationality into the process of disarmament. Their world of immediate decision and risk runs counter to one in which negotiators sit down for years and measure progress in inches.

Playwrights must deal with the fact that diplomacy is a wordy profession, full of talk and little action. How to infuse color into a black-and-white world of phone calls, meetings, report writing and car trips across town? Men in suits talking—well, men in very good suits talking.

One work that gets at this from a historical perspective is Howard Brenton’s Drawing the Line, based on the partition of India and Pakistan. The event occurred in 1947, the play premiered in 2013, and the tyranny of geography—and its relevance to matters military and diplomatic—is eternal.

Drawing the Line focuses on the predicament of Sir Cyril Radcliffe, asked to draw, in a mere five weeks, the boundary line that would create the sovereign states of India and Pakistan. Chosen by Prime Minister Clement Attlee precisely for his utter lack of knowledge of India and cartography, the play revolves around his increasing dismay over the impossibility of his task. In the first act, Gandhi derisively calls him “a British judge come to rip India apart like an old cloth,” and an unnamed elder poses the question which comes to haunt him: “Pakistan is in my heart but where is it on earth?”

India’s last viceroy, Lord Louis Mountbatten, personifies British cynicism, warning Sir Cyril that the most he can hope for is “an acceptable level of violence,” which he calmly quantifies as about a hundred thousand deaths.

In fact, there were more than a million deaths, and fourteen to fifteen million people were displaced when they awoke to find themselves on the wrong side of the border. This play, too, should resonate for members of the modern American military, who have seen firsthand how seemingly abstract lines divide and sometimes kill people: the DMZ, the Berlin Wall, the Green Line and the Nine-Dash Line, just to name a few.

Toward the end of Act One, Muhammad Ali Jinnah, soon to be Pakistan’s prime minister, lectures Radcliffe: “India is not a nation or a county. It is a subcontinent of nationalities. . . . You British make this mistake, every time you colonise. You move into a huge area of the globe and call it ‘a country,’ when it is not. You have done so all over Africa, in Arab countries, in Iraq.”

This line has to resonate. American veterans have seen the result of this confusion between nations and nationalities firsthand in Iraq and Afghanistan. Some of this America inherited: the permeability of borders, senseless deaths over geography, losing lives over lines in the sand, drawn decades ago by men with rulers. But some of it we should have known.

Playwright David Hare, of Stuff Happens, also found that war was a great source for drama. He said he collected his material—including the title, uttered by Secretary of Defense Donald Rumsfeld about looting in Baghdad—from press conferences and United Nations assemblies.

Stuff Happens is set in White House cabinet meetings, at 10 Downing Street and at a lunch table of UN diplomats at the Hotel Pierre. Hardliners in the Bush cabinet, including Vice President Dick Cheney as well as Rumsfeld, wanted to go into Iraq immediately. Secretary of State Colin Powell is cast as the lonely hero, isolated by his respect for international protocols and rule of law. His lengthy speech in the first act perfectly articulates the military’s discomfort with civilians who see war as the answer to all foreign policy problems: