How Washington Can Save Nicaragua from the Threat of Tyranny 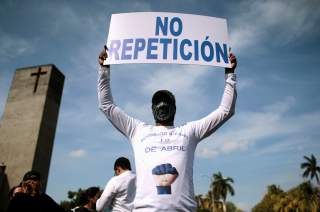 Nicaragua’s opposition movement is struggling under the duress of Daniel Ortega’s ever-tightening grip. The dictator has succeeded in quelling the recent uprisings through intimidation and repression, leading to the deaths of over three hundred Nicaraguans and widespread human-rights abuses. U.S. policymakers have been slow and irresolute in their response. To restore democracy to the country through early elections, Washington will have to escalate the pressure campaign on Ortega and fine-tune its sanctions policy to achieve key electoral reforms.

Nicaragua’s paramilitary groups roam the streets and the countryside, killing journalists and harassing peaceful protestors. Security forces have injured more than two thousand people and forced nearly one hundred thousand into exile in neighboring Costa Rica. Ortega has strangled the free press by preventing the import of newsprint, ransacking media offices, and shuttering one of the country’s main newspapers—despite the outlet’s close association with the Sandinista movement he leads. Meanwhile, Nicaragua has become a magnet for Central America’s most-wanted fugitives, with the government granting them citizenship and a handsome salary as “paid advisors” to Ortega.

In the face of Ortega’s unrelenting authoritarianism, Washington has largely dropped the ball. Despite labeling Nicaragua as part of the so-called “Troika of Tyranny” menacing the Western Hemisphere, the Trump administration has ignored Ortega’s role in destabilizing Central America. When announcing U.S. policy toward the Troika, former National Security Advisor John Bolton said, “The Nicaraguan regime, like Venezuela and Cuba, will feel the full weight of America’s robust sanctions regime.” However, U.S. sanctions have taken aim mostly at Venezuela and Cuba and ignored Nicaragua.

Instead, Washington’s strategy towards Nicaragua has centered on diplomatic isolation, leveraging Ortega’s manifest anxiety over his country’s reputation abroad by seeking its expulsion from regional fora like the Organization of American States (OAS). In order to do so, the United States pushed for a Commission on Nicaragua to engage in “extraordinary diplomatic efforts,” including jump-starting moribund negotiations. Ortega responded by blocking the entry of the OAS Commission. The commission has continued its work from El Salvador and will present its suggestions after the seventy-five-day mandate ends on November 11. Without U.S. pressure and persistence, however, Ortega is counting on the disinterested international community to relegate this report to the dustbin of OAS history.

Moreover, failure to lay out a vision for dealing with Ortega after a vote on expulsion—a move that could easily fail—has partly contributed to the frustration of opposition groups, some of which have resorted to the use of violent tactics. If U.S. idleness permits these minority factions to consume the Civic Alliance, the distinction between Ortega’s brutal regime and the opposition could be lost.

With many leftist regimes in the region proving resilient, it is likely that Ortega feels confident in his ability to ride out the discontent because valuable U.S. energy has been channeled elsewhere. Beyond Nicaragua, Venezuela’s dictator Nicolás Maduro, buoyed by Cuban intelligence officers, has shown remarkable staying power in the face of an onslaught of U.S. sanctions. Recent elections in Argentina have returned the Kirchnerista Peronists to power, ensuring the resumption of a close working relationship between Argentina’s leftists and the region’s autocratic leaders. Only Bolivia’s socialist president, Evo Morales, was pushed out by protesters and a military that no longer backed him after the OAS caught him in a brazen attempt to steal an illegal fourth term.

In this context, the United States must sharpen its strategy against Ortega. Right now, there is broad-based support for further U.S. sanctions in Nicaragua. In a poll this past summer, 63 percent of Nicaraguans said that deposing Ortega was more important than the economy’s performance, while 70 percent said Ortega must resign immediately. Specifically, U.S. sanctions must have two targets—individuals within the Sandinista leadership and the business interests of the elites who prop up Ortega.

Sanctions on individuals should focus on creating schisms within the ruling elite and the security forces, as well as punishing those who have carried out human rights abuses, under the authorities of the Global Magnitsky Act. Using the NICA Act, sanctions on the latter should continue to cut off the $1.6 billion in project financing allocated from multilateral lenders and aim to corral Nicaragua’s powerful business community, which came to a modus vivendi with the socialist Ortega long ago, in any political transition.

Sanctions should incentivize early elections, but only under a reformed electoral process that guarantees a level playing field. To date, the opposition’s political infrastructure has been devastated by Ortega’s narrowing of the country’s democratic space. In return for lifting individual and economic sanctions, the United States should secure changes in both the composition and operation of the Supreme Court and Supreme Electoral Council, which have been key components of Ortega’s ability to consolidate his rule and sidestep terms limits twice.

Above all, U.S. sanctions should aim to deconstruct the remnants of the country’s dirtiest political deal. In 1999, Ortega maneuvered, with the connivance of right-wing caudillo Arnoldo Alemán, to change the country’s run-off system to allow for the victory of a presidential candidate with 35 percent of the vote, provided no other candidate was within 5 percent. This rule allowed Ortega to win in 2016 with just 38 percent of the vote, despite the removal of the opposition’s main candidate.

Armed with a clearer sanctions strategy, Washington may find it easier to convince the European Union that it should take similar actions under a new framework to enable targeted sanctions against individuals while avoiding the fallout that has characterized other “maximum pressure” campaigns. After all, many of these reforms are in line with a 2017 Memorandum of Understanding Ortega signed under pressure from the United States and European Union, which recognized the urgent need for political and electoral reform.

Finally, the United States should consider the appointment of a special envoy to Nicaragua in order to coordinate strategy and prepare the opposition, both for elections and for the day after scenario. An envoy could also ensure that the opposition leverages the growing internal fractures in Ortega’s regime.

Ortega recognizes the danger of Nicaragua achieving pariah status. Nevertheless, the window of opportunity to push him to agree to early elections is rapidly closing. If Washington seizes the opportunity to increase sanctions and offers clear and achievable conditions for their removal, it could give the opposition a chance to defeat Ortega at the ballot box, rather than resort to violence.

Ryan Berg is a research fellow at the American Enterprise Institute, where he focuses on crime, narco-trafficking, and foreign policy in Latin America.