How Washington Will Lose Its Influence in Asia 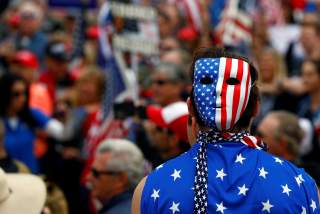 As Douglas Irwin said, if “truth” is the first to be sacrificed in the war, then “free trade” will be the scapegoat in the populist electoral politics. The most recent examples are the Brexit and the U.S. withdrawal from the Trans Pacific Partnership (TPP-12). While the British government is facing contentious negotiations with the EU, the United States under President Trump’s “America First” trade policy will be less supportive of outward-looking policy and more assertive on U.S. national interest.

Trade deficit in any country is fundamentally a sectoral imbalance in the macroeconomy between domestic saving and investment—as well as that between tax revenue and government spending. U.S. Commerce Department data shows that the percentage of manufactures in total GDP after the financial crisis of 2008 is rather flat around 12 percent with minor fluctuations within one percentage point between 2008 and 2015 periods. The estimated millions of manufacturing jobs lost since then are due to automation of production process. Hence, it is “technology” and not “trade” that caused the loss of manufacturing jobs for American people.

President Trump prefers “bilateral” to “multilateral” trade deals. Other than domestic political consideration of fulfilling his campaign rhetoric, the probable rationale is the asymmetrical power between the United States and most of its trading partners; bilateral trade agreements would allow the dominant country, such as the United States, which has bargaining chips to bring its power advantages, to secure a trade deal that is more aligned to its own interests rather than those of the relatively weaker partner country.

Deepening bilateralism, if fully implemented, can plausibly lead to a hub-and-spoke relation centered on the dominant “hub” power. Moreover, it could generate a domino effect on other nonmember states to join the bandwagon of multiple free-trade agreements (FTAs) to avoid being an outlier. The other aspect of bilateral trade deal is the competitive liberalization among those trading partners who wish to benefit from preferential trade agreement from the “hub.”

From geoeconomic perspective, the America First policy is blinded by the U.S. role in the Asia-Pacific region and global-trade system, not to mention that the geostrategic role that the United States has had in the region as a Pacific power under which much of the regional peace and stability relies. As Johnathan Stromseth and Ryan Hass have argued that “without an affirmative economic agenda for the region that takes into account the integrated nature of Asian supply chains, Washington will lose influence in Asia, no matter how many U.S. aircraft carriers operate in the region.” Though Japan will take the lead to push the TPP without the United States, the Comprehensive and Progressive Trans Pacific Partnership (CPTTP) agreement, the Asian drama is now just like “Hamlet without the Prince.”

As the largest center of production networks in the global economy, East Asia has much at stake in the push back by the United States against an open, global rules-based trading system underneath the current trading framework. No doubt that many Asian countries are very nervous about the trade policy undertaken by the Trump administration amid the parallel development from China’s “One Belt, One Road” initiative and its establishment of Asian Infrastructure Development Bank.

These four pillars, if fully executed, could generate, at least two major legacies on the trading framework; the first one is the different “rules of origin” under various trade accords, and even different rules in different sectors within the same trade pact. That is the “spaghetti bowel” phenomenon which led to the low utilization rate of FTAs; a survey from Asian Development Bank showed that the utilization of FTA among the signatory in Asian countries such as Korea and Singapore is less than 25 percent because the administration cost of complying with the different “rules of origin” specified by the trade accord is higher than the marginal benefits of the FTAs signed.

The second is that multiple bilateral trade accords are no substitute for multilateral ones for regional economic integration. This is one reason why the original TPP-12 is intended to be the most comprehensive and integrated trade accord to link Asia and the Pacific states with those on the other side of the Pacific Ocean. Similar rationale is for the five ASEAN + 1 FTAs (ASEAN + Australia and New Zealand, China, India, Korea and Japan) to merge into a unified trade accord as the Regional Comprehensive Economic Partnership (RCEP).

If the United States will maintain its leadership in the APEC in pushing the Free Trade Area in the Asia Pacific, then the withdrawal from the TPP is a terrible policy mistake. One reason that Japan takes the lead to push the CPTPP is waiting for the Sleeping Beauty to wake up in the near future. That is why only about twenty clauses of the original text of the TPP are frozen, rather than being scrapped in the CPTPP.

Make It or Break It on the Renegotiations of NAFTA

There are several rounds of renegotiations of the North American Free Trade Agreement (NAFTA) with Canada and Mexico. While it is too risky to predict its final outcome, there are several indications which will help us understand the situation. First of all, Canada has signed a “Comprehensive Economic and Trade Agreement (CETA) with European Union (EU) and negotiated with China for a similar FTA, though the deal didn’t work out during the visit to China by Prime Minister Justin Trudeau in November 2017. Canada took advantage of the United States leaving the TPP to change the terms of the bargain in the CPTPP; Canadian stand is understandable because she had come late to the TPP-12 negotiations in 2012 and had to accept the negotiating results up to that point, not all of them are in her favor; One thing that Canada wanted to change was the “cultural exemption,” which mainly means the requirement for Canadian content in the media.

But, model simulations from Canadian economist Dan Ciuriak and his associates show that not only Canada, but also three other Pacific States, i.e. Chile, Peru and Mexico will benefit more from the TPP without the United States than from the original TPP-12.

Economic interdependency between Canada and the United States may leave less leverage for the Trump administration to demand much more than what the original NAFTA has made. There are several items on the agenda of negotiations table such as a five-year termination, an opt-out investor-state dispute settlement (ISDS) system, the rule of origin on auto parts. Secretary Wilbur Ross showed the blue-red map of the electoral votes to President Trump that many of his die-hard constituents in the red dotted states were against the dismantling of the NAFTA.

Trade structure between Mexico and the United States is very different from that between China and the United States; while China’s exports to the United States are predominantly final consumption goods (though a great deal of U.S. imports from China such as iPhone have more U.S. content than Chinese), much of Mexican exports to the United States is mainly in intermediates with parts and components accounting the most. In other words, the negative impacts of U.S. imports from Mexico is much less than that from China. Therefore, relatively speaking, President Trump may be able to take a strong stand on China economically, but he has much less economic rationale to impose tariff on import from Mexico. More important, Mexico will have a national election on July 1, 2018. It is hard for any incumbent to make serious trade concession prior to election in any democratic countries.

Claude Barfield at the American Enterprise Institute predicted that the chances that the United States, Canada and Mexico will reach agreement for an update of NAFTA are no more than 50–50. U.S. Trade Representative Robert Lighthizer failed to reassure Democratic members of the Senate Finance Committee that he could prevent a NAFTA withdrawal in early December, 2017. Will President Trump be able to say “take it or leave it” to Canada and Mexico?

The sunset clause of the Trade Promotion Authority Act

Under the Trade Promotion Authority Act (TPA) signed by President Obama in June 2015, the Congress authorizes the U.S. president to engage in trade negotiation. With the due process of prior notice, consultation before and during the trade negotiation, the Congress can only have a straight up or down vote, without amendments. Without the TPA, the Congress could theoretically ratify any signed trade deal article by article. In fact, the procedure is so complicated that no trade deal can be ratified under such circumstance.