How We Won the Cold War, but Lost the Peace 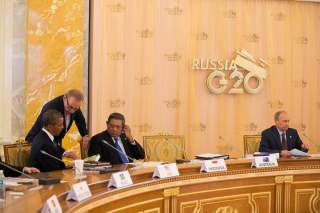 To have any hope of healing the deep wound in the very heart of Europe that is the crisis in Ukraine, we must first separate two crises that have become intertwined. One is the crisis of Ukrainian statehood. The other is the crisis of Russian relations with the West.

The crisis of Ukrainian statehood cannot, in fact, be resolved by Western intervention. One reason is that even the most generous package of Western assistance imaginable is still an order of magnitude too small to stabilize the entire Ukrainian economy. Another reason is the West’s persistent failure to grasp that the current crisis is not the result of the civil war. Rather, the civil war is the result of the failure to resolve fundamental issues of national identity and statehood in a manner that satisfies both Russian- and Ukrainian-speaking Ukrainians. The fateful decision by Western governments to back one interpretation of Ukrainian nationhood in its effort to dominate over the rest merely ensures that this conflict will continue for decades to come.

The second crisis that of Russian relations with the West is the result of the unfortunate decision to hold relations with Russia hostage to the success of Ukrainian statehood. Since the success of a Ukraine identity whose conceptual roots rest in a relatively small and highly localized portion of the population (Galicia) is far from assured, such a linkage can only lead to the deterioration of relations to the point of outright hostility and confrontation. Having put all their eggs in the Ukrainian nationalist basket, however, both the current government in Kiev and its Western supporters now have every incentive to blame Russia for any and all failures.

But while the current crisis has a precise origin—the overnight disavowal by the foreign ministers of Germany, France and Poland of the February 21 transfer of power agreement signed between president Yanukovych and the opposition—it has been over twenty years in the making.

We are, in fact, now reaping the bitter harvest of a post–Cold War relationship that was cast as a conflict of values. Conflicts of this kind inevitably become existential conflicts, to be seen through to the bitter end, regardless of the cost. Until victory is achieved, it can only be mitigated. The “reset” initiated by President Obama during his first term was just such an attempt to mitigate the impact of the supposed conflict of values, which had spiraled out of control under George W. Bush. Now that it has failed, the United States seeks to return to an earlier model of mitigation that once rallied Europe behind it—containment.

Whether or not this neo-containment will succeed is open to debate. The world is very different today from what it was in the 1950s. While the English-speaking community of nations seems quite willing to follow America’s lead in confronting Russia, many Western and Central European nations (most notably Austria, Hungary, Czech Republic and Slovakia) are reluctant to sever their profitable commercial ties with Russia.

Meanwhile, within the CIS, fear of Russian dominance often vies with a certain amount of nostalgia and envy of Russia’s economic success. Those who blame the present crisis entirely on Putin favor expanding NATO and confronting Russian aggression. On the other hand, the disastrous social and economic impact of the Euromaidan has cooled the ardor for EU and NATO expansion among others.

Finally, one should not underestimate the global appeal of the BRICS, a rising economic and political coalition of states of which Russia is a key member. These nations are promoting an alternative to hegemonic stability that many nations around the world find very appealing.

Overall, therefore, neo-containment is not likely to be successful, unless Russia can be portrayed as an inveterate aggressor and a systematic violator of international agreements for ideological reasons, as it was during the height of the Cold War. The obvious absence of such an ideology, however, has lessened the international community’s sense of urgency and reduced neo-containment to constraining President Putin. Beginning with former secretary of state Hillary Clinton, U.S. government officials have sought to overcome Europe’s lack of enthusiasm for neo-containment by arguing that Putin’s proposal to create a Eurasian Union out of the current CIS Customs Union will reconstitute the USSR. Most international observers, however, regard the Eurasian Union as a threat primarily to European commercial interests.

Russia’s response to neo-containment has thus far been ad hoc. During the present crisis, Russia has been sticking to the three principles it previously formulated during the conflict with the Saakashvili regime in Georgia, when it also faced sanctions and accusations of aggression. First, Russia will “step aside” from direct confrontation with the West and refuse to be drawn into any military conflict. Second, it will diversify its markets, thereby limiting the impact of sanctions on the Russian economy. Finally, it will seek to “democratize international relations,” a strategy better known as fostering multipolarity.

But a more comprehensive strategy might be in the works. Putin’s address to the Valdai discussion club in September 2013 suggests a distinctive, Russian vision of a new world order. Albeit still based on Western values (which Russia shares as much as any other country, according to Putin), it confronts the obvious decay of those values in the West and calls for a restoration of tradition. Putin suggests that policies based on traditional Western values would show greater respect for the traditional values of other cultures, and usher in a world restored to the principles of classical political realism.

The West’s inability to shake off the intellectual straitjacket of containment, even two decades after the demise of the Soviet Union, highlights just how much needs to change to end the cycle of hostility inherited from the Cold War. The key emotional and cognitive transformation that must be achieved, and that was not achieved by this first post–Cold War generation, is to recognize that Russia is an inalienable part of Europe.

If Russia had been embraced as part of Europe immediately after the collapse of the Soviet Union, NATO might have expanded to include Russia, a prospect that Putin saw as a distinct possibility back in 2000. All the conflicts that have occurred in Eastern Europe since then have been the result of the fateful decision to exclude Russia from the European alliance system and to set up a separate track for dealing with Russia, instead of bringing her into the consultative process. Had Russia been included as part of Europe, the entire political and cultural conflict in Ukraine would also have been avoided, since there would be no “civilizational choice” to make.

Second, an entirely new philosophy must underpin European security. Instead of forging a new pan-European security framework to anchor Russia to Europe, we repurposed NATO, disingenuously pretending that a military alliance that excluded Russia and that justified its continued existence as a bulwark against threats from Russia would not invariably be perceived as directed against Russia.

Throughout the nineties, and even well into Putin’s second term, Russia refused to act on this threat, preferring to advance its security through “more profound integration” with NATO. But when these institutions were put to the test during the August 2008 crisis with Georgia, and Russia’s appeal to the Russia-NATO Council for assistance in bringing about an immediate cease-fire was rejected, attitudes in Russia changed dramatically and a new anti-Western consensus was formed.

Instead of pushing Russia into ever-greater isolation through sanctions and other punitive measures, European statesmen would be wise to embrace the concept of mutual dependence which has proven so successful in overcoming other seemingly intractable conflicts, such as the age-old conflict between Germany and France.

Alas, there is little evidence of such creative thinking today. Still, perhaps we can take some comfort in the knowledge that Europe has weathered such conflicts before. As the late British historian Sir Herbert Butterfield (1900-79) recalls:

"In the days of my own childhood, it was still the English against the French, these latter being the traditional enemy. I can remember even now the schoolbook which said that the English owed all their freedom to their kinship with the Germans, for liberty went back to the Teutons in their primeval forests. . . . The antithesis to all this was to be found in the Latin countries. I still remember how it was all spelled out: Italy stood for the Papacy, Spain had had the Inquisition, while France, twice over, if you please, had chosen to live under Napoleonic dictatorships, an evil which, in my young days, had as yet had no parallel in other countries."

Then, as now, rising above ancient enmities depended on recognizing that our enemy's cultural heritage is not just similar to our own; it is, in fact, our own. Only when all Europeans fully recognize and embrace this idea can the script of "Western democracy" be rewritten to include Russia, just as it was once rewritten to include Germany and Japan.

The present generation grossly underestimated the difficulty of burying the past and treating Russia as an equal partner. This task now falls to future generations, hopefully less burdened by the legacy of the Cold War and more familiar with Russians as business partners, schoolmates, travel companions, maybe even film stars and cultural icons. Let us hope that they will have the courage needed to overcome the destructive stereotypes that have prevented us from fulfilling the promise of the end of the Cold War.