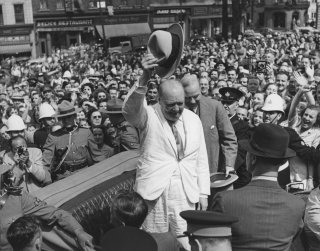 ... the cartoonists’ delight, captured particularly well on many occasions by David Low of the Evening Standard, most famously just after the 1945 election, [in his cartoon] of “Two Churchills”: the grumpy, arms-folded “Party Leader”, despondent and sour after his rout at the polls, and then atop a plinth, “The Leader of Humanity”, looking much more cheerful and, of course, flourishing a cigar, as he tells the other, “Cheer up! They will forget you, but they will remember me always.”

And so we have.