How Will the Growing U.S.-European Split Affect NATO? 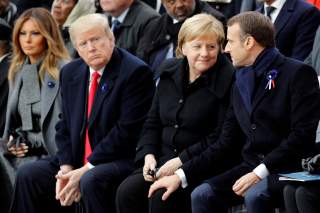 An array of news stories over the past two weeks confirms that Washington’s NATO allies are increasingly defiant toward U.S. policy objectives that they consider misguided or merely inconvenient. One prominent blow came when Turkey finalized its purchase of S-400 air defense missiles. Trump administration officials had told President Recep Tayyip Erdogan’s government for months that executing that deal was unacceptable. Not only would the S-400s be incompatible with systems that other NATO members were deploying, thus undermining a coordinated NATO air defense, but the purchase symbolized a disturbingly cozy relationship that was developing between Turkey and Russia. The administration warned its Turkish ally that “grave consequences” would occur unless Ankara backed away from the sale. Yet Erdogan seems intent on ignoring Washington’s thinly veiled threat.

Other NATO allies appear rather uncooperative as well—especially on U.S. efforts to confront and isolate Moscow. Speaking at a conference on March 10, Italian prime minister Giuseppe Conte stated that he was working to end international economic sanctions against Russia. Those measures, which the Western powers imposed on Moscow following Vladimir Putin’s decision to annex Crimea in 2014, remain a high priority for Washington. Conte’s coalition government, though, argues that the measures are ineffective in getting Putin to capitulate and have become an end in themselves. Meanwhile, Italian officials complain that the restrictions needlessly hurt Italy’s economy. Conte is hardly alone in his negative view of the sanctions. Hungary’s prime minister, Viktor Orban, has made similar arguments for months, and other countries, including Belgium, the Czech Republic, Bulgaria, and Greece, show signs of restlessness, with officials expressing increasingly critical sentiments about the sanctions strategy.

The NATO allies are even less enthusiastic about confrontational military measures toward Moscow. Vice President Mike Pence discovered that reality in February when he tried to enlist German Chancellor Angela Merkel to send warships to test the Kremlin’s assertion that the Kerch Strait is now Russian territorial waters. The strait, which connects the Black Sea and the Sea of Azov, separates Russia’s Taman Peninsula from the Crimea Peninsula. Despite Moscow’s annexation of the latter in 2014, Kiev still considers Crimea to be Ukrainian territory and the Kerch Strait to be an international waterway, a position that the United States and its allies back. In November 2018, three Ukrainian ships tried to force a transit of the strait without giving forty-eight hours-notice and receiving the explicit permission that Moscow requires. Russian security personnel fired on two of the ships, rammed the third one, and took the vessels and crews into custody, triggering a nasty international incident.

Pence appeared to want a “freedom of navigation” patrol to vindicate the position that the strait is still international waters. The U.S. Navy routinely takes similar actions in such places as the South China Sea and the Taiwan Strait to rebut China’s expansive claims. In this instance, though, he wanted Germany to serve as Washington’s freedom of navigation pawn. Merkel was wary of such a provocative, dangerous maneuver, and she turned the vice president down.

Such policy recalcitrance on the part of the European allies has been growing for years. When President George W. Bush pushed hard to bring Georgia and Ukraine into NATO in 2008, both Germany and France strongly resisted that goal. Not only did they consider both countries to be governed by unstable, corrupt administrations, they feared yet another round of NATO expansion would unduly provoke Russia and worsen already tense relations with Moscow. Paris and Berlin have grown no more receptive to NATO membership for Georgia or Ukraine since then.

European rejection of U.S. policy goals is not confined to the issue of relations toward Russia. When President Trump announced in December that he intended to withdraw all U.S. troops from Syria, the allies promptly sought to torpedo that initiative. Trump’s goal was to have an international peacekeeping force that included troops from both European and Middle Eastern nations replace the U.S. presence. The allies stated bluntly that they would not stay if the United States withdrew. Trump sought to soften his approach, announcing that Washington would keep 200 troops in Syria and contribute another two  hundred to an international peacekeeping force. Most European allies, though, still seem unreceptive to a call to contribute their own forces.

It is true that Washington sometimes has faced resistance from its NATO allies during earlier eras. French president Charles de Gaulle was a notorious thorn in the side of U.S. officials during the 1960s. Germany and other European nations angered Ronald Reagan’s administration in the 1980s when they agreed to buy natural gas supplies through a pipeline that Moscow controlled. But both the breadth and intensity of the opposition is greater this time. That development suggests that European officials and their publics are finally realizing that while American and European interests overlap, they are not congruent. Indeed, on issues ranging from policy toward Russia to how to deal with the Iran nuclear question, there are indications that American and European interests are sometimes incompatible. That reality raises profound questions regarding NATO’s viability and the future of the transatlantic relationship—questions that cannot be resolved by stale invocations of Alliance solidarity.

Ted Galen Carpenter, a senior fellow in security studies at the Cato Institute and a contributing editor to the National Interest, is the author of twelve books and more than 750 articles on international affairs.