How Will the Midterm Elections Change U.S. Foreign Policy? 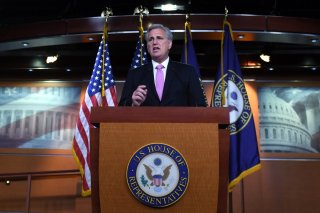 More than a week after election day, the makeup of both chambers of the 118th Congress has finally been determined. The Democrats will maintain control of the Senate, holding at least the fifty necessary seats, with the possibility of increasing to fifty-one, depending on the outcome of December’s runoff election in Georgia. On Wednesday, various media organizations officially called the House for Republicans. As of this writing, the GOP has won 218 seats—the bare minimum for a House majority—and the Democrats 211, with six seats yet to be called. Regardless of the final tally, the much-promised “Red wave” did not materialize.

As is usually the case, foreign policy questions did not play much of a role in determining votes in this year’s midterms. But the outcomes of the election will nonetheless have an effect on how the United States conducts its foreign policy.

One of the potential stakes of the GOP sweep was the future of U.S. support for Ukraine. Rep. Kevin McCarthy (R-CA), the current House minority leader, and—despite some internal hand-wringing—the likely next speaker of the House, told Punchbowl news in October that under Republican leadership, Ukraine would not receive a “free blank check“ from the United States. Rep. Marjorie Taylor Greene (R-GA) went a step further, asserting that “not another penny will go to Ukraine,” if Republicans controlled Congress.

Of course, much of this was pre-election rhetoric, and most GOP lawmakers have voted in favor of all of the Ukraine aid packages to this point. But given that one of the primary objectives of a Republican house is likely to be an attempt to make the second half of President Joe Biden’s terms as uncomfortable as possible, there should be a more robust discussion of what U.S. policy toward Ukraine will look like.

And while the underwhelming performance may take some of the wind out of the sails of the party’s Trump wing, a narrow majority also increases the relative power of dissident voices within the caucus. Rep. Thomas Massie (R-KY), an outspoken critic of the country’s current stance on Ukraine and American foreign policy more generally, explicitly made that point on election night. “I mean, look at what Joe Manchin has done in the Senate as the one deciding vote, right? I would love for the Massie caucus to be relevant,” the Congressman said according to Politico. “If there’s a one seat majority, my caucus has one person. It’s me. So I can decide whether a bill passes or not.”

In the Senate, most of the Donald Trump-endorsed “America First” candidates lost, though one winner was J.D. Vance, the senator-elect from Ohio. In February, before Russia’s invasion, Vance said “I gotta be honest with you. I don’t really care what happens to Ukraine,” a statement he later walked back while maintaining that “We’ve got to stop the money spigot to Ukraine eventually.” But while Vance may bring a more critical voice towards the U.S. role in Ukraine, his presence in the Senate is unlikely to have much impact on policy. At a virtual event hosted by the Quincy Institute for Responsible Statecraft shortly after election day, Jacob Heilbrunn, editor of The National Interest said “I was anticipating, falsely it turns out, that there would be a stronger crop of Republicans, particularly in the Senate, who would be opposed to Ukraine funding. (...) To me, the next two years looks like more of the same.”

As Russia continues to suffer losses on the battlefield, the war may be entering a new phase in which there could be an opportunity for a negotiated settlement, which, if politics allow, may also present the chance for some bipartisan agreement, according to George Beebe, director of grand strategy at the Quincy Institute. “These are issues on which, I think, philosophically, some of the ‘New Right’ members of the GOP are going to be pushing in a direction that the Biden administration might find congenial,” said Beebe, speaking at the aforementioned event. “And so politics and policy might come into a little bit of a tension, for some of the new Republican members.”

In terms of foreign policy, Vance’s Senate campaign was more concerned with a hawkish attitude towards China than it was with Ukraine. Considering the Republican Party’s apparent fully-throated adoption of anti-China rhetoric, it may appear that more legislation aimed at combatting China’s rise may be on the horizon. But hawkishness toward China is one of the few issues where there appears to be consensus between the two parties (Vance’s election opponent, Rep. Tim Ryan, for example, ran a campaign that was explicitly hawkish toward China), so there may not be too much difference between what a Republican-led House and a Democratic one may pursue in that domain.

In addition, the GOP lawmakers who appear poised to take over important House committees are foreign policy tend to be more aligned with the party’s establishment than with the so-called new right.

American elections, and midterms in particular, rarely influence foreign policy. But as Dan Drezner wrote in a recent Substack post, “these have not been ordinary times.” There was an expectation that a dominant win by Republicans could have altered the Biden administration’s foreign policy calculus. The results in the House mean that the president’s life could be made more difficult, but—at least as far as foreign policy is concerned—continuity appears to have been the big winner.