How Will Moscow Respond to the Syria Strikes? 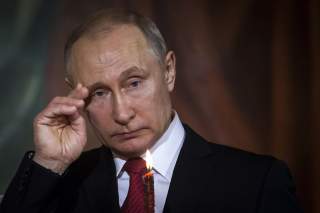 Moscow is calling for an emergency meeting of the U.N. Security Council about the western strikes on Syria. Russian president Vladimir Putin said on Saturday that President’s Trump’s move is both an “act of aggression” and a “destructive influence on the entire system of international relations.” Russia is claiming that the Syrian military was able to use a Soviet-era missile defense system to target and destroy dozens of missiles launched at Syrian air bases. There is also speculation that Moscow will respond with cyberattacks for the attack on Syria. Col. Gen Sergei Rudskoi has stated that Russia may now deliver S-300 air defense systems to Syria.

But for all the dangers of escalation, so far the entire Syria affair appears to have had a highly choreographed nature to it. After days of public signaling, the moving around of equipment and personnel, and plenty of backchannel communications (a role played with great assiduity by Israeli Prime Minister Benjamin Netanyahu, who has been in constant and close contact with both Washington and Moscow), the United States, Britain and France launched a coordinated but circumscribed attack on specific Syrian. The exercise seems to have been framed in terms of upholding honor--a public transgression was committed by the Bashar al-Assad regime in Syria, with the apparent backing of Russian president Vladimir Putin--and in response to that transgression, a penalty and penance has been exacted.

At the same time, declaring "Mission Accomplished,"--a questionable phrase to use if there ever was one--the president is once more indicating that he has no desire to become more deeply involved in the Syrian conflagration beyond the limited deployments in Eastern Syria assisting in the mop-up operations against the caliphate of the Islamic State. In some ways, Trump is emulating the Netanyahu playbook for Syria: taking decisive but very focused action whenever there is a development in Syria that is viewed as unacceptable--but otherwise refusing to climb the ladder of escalation beyond a single, defined military action. Military action was taken, but it was limited; no Russian assets were targeted, lowering the prospects of a direct clash with Moscow; and the U.S. government has been at pains to repeat that this was a one-off retaliation for the specific usage of chemical weapons, not a precursor to more sustained American involvement.

How seriously were the capabilities of the regime damaged? Some destruction of the Syrian regime's infrastructure to continue to wage war against the opposition occurred, but the strikes do not appear to have been of such magnitude that the Assad government cannot sustain its campaign. If the regime, which is in the progress of eliminating the last remaining rebel strongholds around Damascus, no longer needs to use chlorine-based weaponry as a tool of terror and intimidation to finish the job of retaking control of these areas, then it would appear that the United States and its allies will not intervene further.

How successful was the strike vis-à-vis Russian air defense capabilities? As is sometimes rumored when Israel carries out raids in Syria, such attacks are preceded by earlier consultations with the Kremlin specifying exactly what is going to be hit and why. Presumably, President Emmanuel Macron, in his call to Putin prior to the strikes, was not phoning to talk about the weather. Of course, the optics of the strike are still negative for the Kremlin: either it acquiesced to Western pressure to allow the strike, which looks bad from a public diplomacy perspective, or its vaunted S-400 air defense system is not as good as advertised--meaning that prospective customers around the world, including Turkey and China, may think again about whether they want to spend good money for a Russian white elephant. And does Russia agree to let this strike slide, as it did the U.S. action last year, or will it do something to respond further--and risk escalation?

Finally, does the strike convey sufficient warning to Iran about America's ability to hit targets when it desires? Will Tehran conclude from this event that it needs to take U.S. concerns about its behavior seriously, or will it view this as a "Trump temper tantrum" that does not show the U.S. ability to sustain pressure in the future? By extension, Russia is also assessing what this strike means in terms of what the U.S. is prepared to do to push back against Russian influence in the region.

The United States "did something" in response to Assad's outrages. It may not be enough in terms of what the Syria opposition or some members of the U.S. Congress would like to see, but having acted on his threat, the President does not appear to be inclined to go further, though he did explicitly reserve the option to attack again if he deems Damascus guilty of once more using chemical weapons. For now, the ball is in Moscow's court--and we will see what its response looks like.