How Will the Poorest Country in Europe Deal with the Coronavirus? 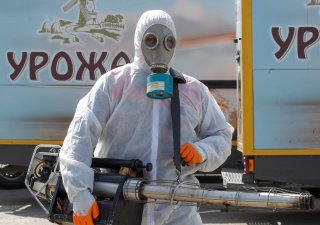 The coronavirus is about to hit Ukraine, the poorest country in Europe, and it may derail the economy and the government.

Most forecasts predict a recession, and best-case scenarios anticipate an economic contraction of 5 to 10 percent, inflation, and half a million unemployed.

The government, led by political showman Volodymyr Zelenskyy, just turned over on March 4. Markets were decidedly unimpressed. After the reshuffle, the yield on short Ukrainian Eurobonds skyrocketed from 3.5 percent to 7.75 percent per year. The Ukrainian hryvnia is now falling, and the international financial market is already closed to Ukraine. The country needs nearly 10 billion dollars from the International Monetary Fund, but it’s unclear whether Ukraine’s parliament will comply with the bank’s demands.

The writing is on the wall. Ukraine is headed for a major catastrophe.

In southern Ukraine, hospitals have 130 ventilators for four million people. Forty are currently in use in ICUs, which means that only seventy are available for when COVID-19 arrives in earnest.

“Hospitals are not ready at all,” Andrey Stavnitser, the co-owner of a company that operates the largest private port in Ukraine, sighs in frustration.

Stavnitser is a young and honest entrepreneur, by all accounts, and he has an unenviable job that he never sought. The president of Ukraine has tasked him with leading the effort to prepare Odesa oblast, a region that borders Moldova and the Black Sea, for the coming coronavirus crisis.

So far, there are 480 confirmed cases and eleven deaths, but tests remain scarce, so the extent of the problem is not yet known.

The bigger picture is equally grim. Ukraine has 6,000 ventilators for a population of 44 million, while Germany with its 82 million people has 25,000 and just ordered an additional 10,000. Ukraine’s health care system is rickety, to put it charitably. Horror stories abound involving bribes and the need to bring in one’s own clean syringe.

Stavnitser said that when COVID-19 test kits arrived in Odesa, regional authorities fought over them. There’s no coordination, and the rules are changing quickly, Stavnitser says.

Experts expect the full force of COVID-19 to arrive in three weeks, but the supply closets in hospitals are already empty. There are huge shortages of gloves, masks, ventilators, and oxygen. Plus, the population skews old—already more vulnerable to the effects of the virus.

Illya Yemets, minister of health, warned outlandishly that “all pensioners will die,” and was subsequently fired by the Ukrainian parliament on March 30. In contrast, Dr. Ulana Suprun, the former acting minister of health and a US-trained physician, disagreed and has been trying to calm everyone down.

“The death rate of the elderly cannot be 100 percent. In China, 5 percent of people became ill. In Italy—8 percent. In Korea, less than 1 percent. Therefore, the minister was very wrong,” Suprun told Ukrainska Pravda.

Laying aside the doctors’ dispute, the pandemic will hit Ukraine hard, and the government has already shuttered airports and public transport. Working from home has become the norm for those who can.

But there are real limits to how long these precautions can last. A recent online survey found that only 27 percent of Ukrainians have enough savings to survive for more than a month if the government were to impose a strict quarantine.

This is a real problem for Ukraine. According to Gennadiy Chizhikov, the president of the Chamber of Commerce and Industry of Ukraine, between 500,000 to 700,000 Ukrainians have already been thrown out of work by coronavirus. By his estimates, this number could increase 5-fold over the next several weeks.

Stavnitser is also worried about fraud as the government and businesses try to stock up on much-needed supplies. In Kharkiv, Ukraine’s second largest city, COVID-19 test kits were ordered from China. When they arrived, officials discovered that they only tested for the common flu.

In spite of these very real problems, the picture is not entirely bleak.

Companies are stepping up and want to give, says Andy Hunder, the president of the American Chamber of Commerce in Ukraine.

There may be solutions within Ukraine as well. The country used to make ventilators, but the company went under. Aivaras Abromavicius, the head of Ukroboronprom, the state-owned defense company, said they found incomplete specs for the ventilators and gave them to private companies.

Other companies are stepping up. Navator is sewing masks and pledged to make 100,000 within the next week, Abromavicius said.

Plus, Ukraine has talent. Engineering and scientific knowhow abounds. It’s also a DIY kind of place. If the government cannot supply ventilators and PPE, ordinary Ukrainians will begin to make their own.

For now, as Ukrainians begin to prepare for the worst, Suprun, the doctor and former health minister, encourages social distancing with lots of handwashing—but without paranoia.

For those inclined to pitch in, Suprun recommends donations to Patients of Ukraine, an NGO with an impeccable reputation that is working across the country to provide PPE to physicians, X-ray machines, and other urgently needed equipment.

“We are only at the beginning of the epidemic in Ukraine,” Suprun rightly notes. Watch this space.

This article has been updated as of March 30, 2020 to include the latest coronavirus-related data coming out of Ukraine.

Image: A specialist with protective gear sanitizes the facilities of a local bakery to prevent the spread of coronavirus disease (COVID-19) in the rebel-controlled city of Donetsk, Ukraine March 27, 2020. The logos on the trucks read "Harvest". REUTERS/Alexander Ermochenko.