How Will Trump Enforce Sanctions on Russia? 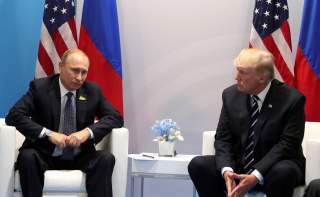 What is Russia’s likely reaction when new U.S. sanctions are imposed? This is a difficult question to analyze, because much depends, first and foremost, on what the Trump administration is prepared to do. Congressional legislation in the area of foreign policy is always tricky, because while Congress can mandate and fund, it is the president who chooses the manner, style, speed and pace of execution. After all, Congress could authorize and all-but-insist upon the shipment of “defensive weapons” to Ukraine, but it could not compel President Barack Obama to actually deliver arms.

Both Obama and President George W. Bush routinely used “signing statements” when presented with pieces of congressional legislation which had provisions that they opposed if they were not prepared to veto the entire bill. Bush and Obama have left President Donald Trump a bipartisan precedent of a chief executive using such statements to effectively reinterpret the intent of congressional legislation, particularly in designating congressional mandates as “advisory” when they believed that Congress was infringing on their Article II authority. This is not to suggest that Trump can simply negate sanctions on his own authority, but he can easily spell out in such a document how he understands the legislation and how he plans to carry out its provisions.

In particularly, the revised bill shifted some mandatory provisions—notably on imposing sanctions on non-American firms engaged in activities that American firms are barred from undertaking—into discretionary ones, meaning that the president makes the call as to whether or not to use these powers. Supreme Court rulings, notably in the Zivotovsky ruling, make it clear that Congress cannot direct the president how to use his authority in competencies that belong to the Executive Branch, so even if, for instance, most members want to see German, Italian and French firms punished for their energy business with Russia, they cannot force the president to take such action if he does not deem it to be in the interest of the United States.

Enforcement is also a critical matter. Using his executive authority, Obama directed federal law enforcement to stop pursuing certain categories of people who were residing in the United States illegally, and set down his prioritized categories for immigration enforcement. Similarly, Trump can decide how vigorously and strictly he wants to enforce sanctions on Russia. Some have been surprised, for instance, that the Office of Foreign Asset Control, the part of the Treasury Department that oversees sanctions enforcement, has—so far in the first months of the Trump administration—taken a stricter line on interpreting Obama’s executive sanctions on Russia than the Obama administration did. It is well within Trump’s competencies, however, to change both the personnel as well as the directives which govern how the Russia sanctions will be interpreted and enforced. For instance, a provision in the sanctions legislation that would bar U.S. energy companies from taking part in projects around the world where a Russian entity holds more than 33 percent of the equity will still need a determination as to what constitutes a Russian corporate entity, given that a number of ostensibly “Russian” firms are registered and incorporated in non-Russian jurisdictions—or the reality that a Russian company could, in theory, drop its equity below the mandated level by selling to a friendly Swiss or Qatari entity.

Make no mistake, the sanctions Congress seeks to codify will be damaging to Russian economic interests. But, if Trump indicates that he is prepared to mitigate or soften their enforcement, Moscow may, in turn, limit its responses. For instance, if the administration makes it clear that it is not going to target the European firms playing a critical role in assisting Gazprom in the development of the Nordstream expansion and the construction of the Turkish Stream line—both high-priority projects and essential for Russia’s plan to stop using Ukraine as a transit country by the end of decade—Russia may be less inclined to overreact to the legislation.

Of course, Moscow will be less inclined to do favors for the United States, and will keep pressing ahead—in Syria, in Ukraine, in Venezuela and elsewhere—with its own plans regardless of what Washington thinks. It will be harder to incentivize Russia to adopt American preferences given the limited leverage Trump will have to secure any quid pro quos, given that any sanctions relief he may offer would be subject to Congressional review. The sanctions will also do nothing to arrest the Sino-Russian partnership and effectively invalidates the standing American geopolitical imperative to prevent the development of any entente between Moscow and Beijing on the Eurasian continent.

What happens moving forward is what happens to the American business presence in Russia? As we have seen in the past, the Russian government is perfectly prepared to use all sorts of pretexts (environmental considerations, tax issues, etc.) to create problems for foreign businesses. U.S. firms, in turn, must either resign themselves to the loss of markets in Russia to European and Asian competitors or figure out how a non-U.S. based subsidiary might retain some presence—especially if Russia deploys a raft of counter-sanctions measures as it has done, quite successfully, against the EU. (On a separate note, sanctions have given Russia a pretext for domestic protectionism, which has been a boon to some of the sectors of its economy, notably in agriculture.)

Most importantly, Russia is again incentivized to take up measures to hasten the emergence of a “post-American” system or at least to strengthen the non-American alternatives—especially in terms of trade and finance. Some in Washington might note that Iran made similar claims a decade ago and ultimately failed in those efforts, as sanctions did damage; but I would note that Russia is in a different position, both in economic and political (not to mention military) terms than Iran. Russia will go its own way, continue to try and organize a loose balancing coalition against the United States, and try to encourage U.S. allies in Europe and Asia to hedge their bets when it comes to Russia.

New sanctions on Russia are not a “fire and forgot” tool. They must be accompanied by a more comprehensive approach where either a clear pathway to normalization of relations is offered, or further steps are designed to contain and degrade Russian power. Moscow recognizes this and will strategize accordingly. Is the United States ready?

Nikolas K. Gvosdev is a contributing editor at the National Interest and a professor of national-security studies at the U.S. Naval War College.