How Will We Know When China is Number One? 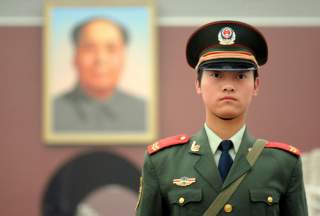 It has been conventional wisdom for well over a decade that China is a rising power. The statistics on China’s current size and projections about its future growth have become such clichés that they scarcely warrant repeating. Suffice to say that most observers agree that China, already the world’s most populous country and one of its military and economic powerhouses, will replace the United States as the world’s largest economy at some point mid-century. The implied corollary is that, if unstopped either by external pressure or internal fissure, China inexorably is set to replace the United States as the world’s dominant military and geopolitical force in due course. Pax Sinica impends.

By most accounts, however, the American Era is far from over. As of 2014, the United States still boasts the largest economy in the world and a vastly superior GDP per capita to China, which, its leaders are keen to remind the world, still considers itself a developing nation. It is U.S. leadership that remains truly essential for global agreements to be concluded and implemented, and it is towards Washington that the world looks when global, regional and local crises emerge. The Pentagon’s budget continues to dwarf those of its rivals. And while the People’s Liberation Army might look menacing from the perspective of Tokyo, Taipei or Manila, China’s military hardly constitutes a direct threat to the United States. China, on the other hand, finds itself encircled by a string of formal and tacit U.S. alliances from the western Himalayas to the East China Sea.

As such, the question presents itself: assuming the continued rise of China, when will we know—indeed, how will we know—that Beijing has knocked Washington off the top spot? The various gauges of national power favored by international-relations scholars—military spending, total industrial output, population, territorial size and so forth—have the virtues of being concrete measures of material wherewithal and at least open up the possibility of comparing the United States and China along objective dimensions. Yet such measures are also highly discrete from one another—that is, they constitute an array of fragmented indicators that are difficult to synthesize into a single index of national power. Attempts to create such aggregated measures of power abound, but often end up failing basic “sniff tests.” And, of course, actual influence in international politics is even harder to grasp, let alone measure.

In fact, the attempt to operationalize and measure China’s ascent to global preponderance may be a lost cause. For China’s assumption of primacy will not be announced by fanfare; no committee of experts will confer to bestow upon China the mantle of world leader. Just as it has been to date, China’s rise will be gradual, uneven and extremely complicated. To understand the coming process more fully, it is helpful to recall the last time one nation replaced another at the pinnacle of the international-political league table.

In the late nineteenth and early twentieth century, the United States played the role of rising power that China occupies today. Back then, the British Empire stood tall among the Great Powers of the world, ruling over 450 million people and thirteen million square miles of territory—roughly one quarter of the planet’s land mass. The “workshop of the world” for most of the 1800s, Britain’s economic preeminence underpinned and bankrolled an unprecedented level of political, diplomatic and military primacy abroad. By the mid-twentieth century, of course, it was obvious that the United States had emphatically surpassed Britain in terms of geopolitical clout. At what point, then, did the United States overtake Britain?

The Anglo-American power transition did not happen all at once. For the sake of convenience, many scholars point to 1895 as the year in which the British Empire began to cede influence to the United States. That year, Britain bowed to President Grover Cleveland’s demand that a boundary dispute between Venezuela and British Guiana (modern day Guyana) be settled via international arbitration, a show of deference that was followed by a gradual strategic withdrawal by Britain from the Western Hemisphere.

Yet it makes little sense to argue that Washington eclipsed London from this point onwards: the United States only overtook the British Empire in military terms during the twentieth century; London remained the world’s financial center until the 1920s; and Washington showed precious little global leadership during the interwar years. The Anglo-American firm fought as nominal equals in World War II, even if it was the United States that emerged as the unmistakable senior partner by the war’s end and aftermath. Although U.S. primacy was clearly established by the time of, say, the Suez Crisis of 1956, such an outcome had seemed far from inevitable sixty, fifty, or even twenty years earlier.

It was only in the post–World War II period that Britain’s influence on the world stage began to obviously pale in comparison to that of the United States, never to recover. While Neville Chamberlain was clear-eyed that British entry into World War II would accelerate the rise in power of the United States (and Soviet Union), his successor Winston Churchill still believed at the time of his famous Sinews of Peace address (1946) that the British Empire and America were roughly matched. Even accepting that Suez epitomizes the extent to which Britain had fallen vis-à-vis its “cousin across the ocean,” it took until the 1960s and 1970s for Washington to replace London as the dominant diplomatic and military force in regions such as sub-Saharan Africa and the Indian Ocean littoral.

However, if there are good reasons to locate the arrival of the United States at some point after 1895, there is equally compelling evidence that America’s rise in power had begun much earlier than this. The United States already was a regional powerhouse by the time it interceded for Caracas. The Washington Treaty of 1872 had settled many outstanding issues between Britain and America in the United States’ favor and really paved the way for the Great Rapprochement that was to follow. Driving London’s conciliatory behavior towards Washington was recognition that balancing against the United States in order to defend Canada and Britain’s Caribbean holdings would be vastly more costly than a policy of rapprochement and perhaps even would be counterproductive. During the U.S. Civil War, America’s northeast had revealed its awesome potential to mobilize considerable military power while the U.S. Navy grew steadily in the decades that followed. During the postbellum period, war with the United States might have been tantamount to throwing away the western half of Britain’s overseas empire—again. As Fareed Zakaria argues in his book From Wealth to Power, that the United States did not assert itself on the world stage earlier than it did has more to do with internal dynamics (state weakness) than any external constraint.

As the Anglo-American case reveals, power transitions in international politics can be long, drawn-out affairs. Yet the Anglo-American case offers another insight into why it will be difficult for observers to realize when China finally has surpassed the United States in geopolitical terms: for a long time, the British Empire actually enforced U.S. foreign policies without Washington having to exert its own military or diplomatic muscle.

This is especially true of the storied Monroe Doctrine. Many Americans believe that the Monroe Doctrine of 1823 established the United States as a hegemonic force in the entire Western Hemisphere. The region’s contemporary actors, however, recognized that the Monroe Doctrine itself was a toothless enunciation. Actually issued as a diplomatic riposte to the Russian tsar’s ukase of 1821 (a declaration of territorial supremacy over the Pacific Northwest), neither Simon de Bolivar and his co-belligerents nor Latin America’s would-be European predators viewed President Monroe’s retort as a signal that the United States had become a credible force in Latin America.

The real muscle behind the Monroe Doctrine was the Royal Navy. For seventy years between the Monroe Doctrine and the Venezuela Dispute, Britain provided tacit support for the diktat of America’s fifth president, vigilantly guarding against European powers seeking to impose themselves on Latin America’s fledgling independent states. Indeed, British Foreign Secretary George Canning actually had entreated Monroe to issue a joint statement in favor of Latin American independence, believing the Anglo-Americans’ interests in the region to be identical, only for the president to reject the proposal on the advice of Thomas Jefferson among others. Despite this affront, London was happy to undergird Washington’s design for the Western Hemisphere for the best part of a century because it had its own interests in keeping most of South America free.

National interest also explains why Britain undertook to police the world’s oceans during the era of Pax Britannica, even though such unilateral exertions actually allowed for “free riding” by trading nations like the United States, which critically depended upon the free trans-oceanic flow of goods for its national prosperity. In pursuing and providing for its own needs and wants in international affairs, Britain acquiesced in creating the conditions necessary for the United States’ and others’ growth in power.