How Word Games Became War Games in the Taiwan Strait 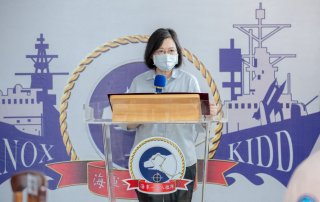 The reverberations of House speaker Nancy Pelosi’s visit to Taiwan in early August are likely to continue for some time. An interactive dynamic is unfolding between Beijing, Washington, and Taipei—each of which has its own interpretation of what has been happening, and its own explanation for what it has felt compelled to do in response. Beijing launched an unprecedented series of military exercises around the island, asserting that Washington and Taipei had breached its red line by violating prior understandings of the “one China” framework. Washington has deemed China’s moves an unwarranted and destabilizing overreaction to Pelosi’s trip and vowed to sustain its own military posture in the Taiwan Strait to deter any actual Chinese use of force. Indeed, two U.S. Navy guided-missile cruisers transited the Strait on August 28; and the Biden administration reportedly is poised to announce $1 billion in new arms sales to Taiwan. Taipei has announced that it will increase its defense spending to enhance the island’s preparedness for any potential Chinese attack. All of this reflects and reinforces the three sides’ tendency to view the cross-strait dilemma as a military problem, thus probably making it even more difficult than it already was to pursue a diplomatic path to de-escalation.

The preoccupation with war games on the strait, however, distracts attention from the complex word games that the three parties are playing as they justify their positions and actions. The leading narrative now is that Beijing has established a “new status quo” or a “new normal” by regularizing an enhanced military posture around Taiwan, similar to the enhanced presence and patrolling it adopted earlier in the East and South China Seas (also, in Beijing’s view, in response to challenges by other countries to its sovereignty claims). But this omits and/or obscures changes to the status quo that arguably have also been made by Washington and Taipei. China policy specialists often recall that in 2004, then-Assistant Secretary of State James Kelly asserted in Congressional testimony that the United States did not support “unilateral moves [regarding Taiwan] that would change the status quo as we define it.” Kelly, however, did not define it; nor have more recent U.S. officials who now routinely reiterate Washington’s opposition to any “unilateral changes to the status quo.” In any event, the status quo obviously is now one in which the speaker of the House can visit Taiwan as a routine matter because this is “consistent with our one China policy”—notwithstanding reports that the Biden administration thought Pelosi’s visit was inadvisable and did not want it to happen.

Taipei has also declined to specify a definition of the status quo, but under President Tsai Ing-wen it arguably has incrementally retreated from the “one China” framework, particularly by refusing to reiterate an earlier historical “agreement to disagree” with Beijing on what “one China” meant (the so-called “1992 Consensus”). For its part, Beijing essentially defines the status quo in terms of its “one China principle”: that there is only one China, Taiwan is part of it, and Beijing is its sole legal government and international representative. The bottom line is that it is futile if not meaningless to talk about “the status quo” on the Taiwan Strait without recognizing and acknowledging that there is no mutual agreement among the relevant parties on how to define or even characterize it. Moreover, the status quo on the Taiwan Strait has never been static. All three parties have been “salami-slicing” what the “one China” framework entails and allows.

Another critical word game focuses on the difference between Beijing’s “one China principle” and Washington’s “one China policy.” Much commentary in recent weeks has rebuked Beijing’s persistent claims that the United States has long subscribed to the “one China principle” even though Washington only “acknowledges” without accepting or endorsing the clause that “Taiwan is part of China.” There is a complicated and arcane history behind this distinction, including the fact that Washington essentially did view Taiwan as part of China until the outbreak of the Korean War in 1950, after which it adopted the position that Taiwan’s legal status was “undetermined”—a position that has since been frequently debated and sometimes rhetorically violated by U.S. officials. Setting aside that obscure history, what is important today is that highlighting the distinction—however valid—between Beijing’s “one China principle” and Washington’s “one China policy” diverts attention from the erosion in the substance and credibility of the latter. In fact, incremental and ongoing upgrades in U.S.-Taiwan interaction over the past thirty years have stretched the limits of “unofficial” relations, as specified in the Three Communiques between the United States and China and the Taiwan Relations Act. This has raised questions about whether Washington is approaching a de facto “one China, one Taiwan” policy, which would arguably violate the Communiques. Beijing certainly thinks so. More importantly, some folks in Washington—including former Secretary of State Mike Pompeo and multiple members of Congress—have advocated it either explicitly or otherwise, calling for the abandonment of the “one China” policy and recognition of Taiwan as an independent country. Pelosi’s visit has given them both an incentive and an opportunity to press that case.

Moreover, it is precisely because Pelosi’s trip has been declared to not constitute a violation of or change in Washington’s “one China policy” that Beijing sees the “hollowing out” of that policy. If the Biden administration, despite its resistance to the Pelosi trip, can nonetheless adopt the position that it was acceptable under U.S. policy—much as the Clinton administration in 1995 shifted its previous position to allow then Taiwanese president Lee Teng-hui to visit the United States (fueling the “Third Taiwan Strait Crisis”)—where is Beijing to understand the limits to be? Presumably, there are limits on high-level interactions that might be specified. But it is not clear whether the Biden administration is politically or diplomatically prepared to supplement its military deterrence against China on the Taiwan Strait with diplomatic assurances to Beijing that there are still clear boundaries in U.S.-Taiwan relations.

Instead, the wordplay also includes the assertion—reportedly by some U.S. officials—that Beijing overreacted to the Pelosi trip by using it as a “pretext” for executing earlier plans to conduct unprecedented military exercises around Taiwan. But any such Chinese plans may well have been prompted by the initial reports in April that Pelosi was planning a visit to Taiwan and postponed it because she tested positive for Covid-19. In any event, Beijing had little to gain and much to lose from dramatically rattling sabers at Taiwan without any perceived provocation—especially given the risks to Xi of sparking an international crisis within weeks of his bid to secure a “third term” and dominate the agenda at the Twentieth Chinese Communist Party Congress, now scheduled for mid-October. The “pretext” argument is more likely an attempt to dismiss the importance of Pelosi’s trip and the relevance of the debate in Washington over whether it should have happened.

There has also been a semantic debate about whether Pelosi’s trip has, in fact, sparked a new Taiwan Strait “crisis.” Some political scientists apparently are disinclined to designate it a crisis on the grounds that they assess little potential for actual military conflict. The Biden administration presumably does not wish to characterize the situation as a crisis because displaying alarm that might lead to reconsideration of U.S. policies is what Beijing is seeking. But it is hard to deny that the aftermath of Pelosi’s visit to Taiwan has seen the hardening of positions on all sides, and an increase in U.S.-China tensions and recriminations that seem more likely to escalate than to be quickly resolved—especially if all sides continue to focus on military responses to the situation. We almost certainly are facing a major and potentially hazardous inflection point in U.S.-China relations. To resist acknowledging that and/or to argue that the state of affairs does not constitute a “crisis” appears aimed at deflecting any U.S. responsibility for either fueling the situation or taking steps to defuse it. But the longer the current dynamic persists without an effort by both Washington and Beijing toward greater mutual understanding on how the Taiwan issue will be managed, the more likely a serious, undeniable crisis will develop.

Beijing, of course, bears ample responsibility for fueling the current predicament. It continues to promulgate its own self-serving narrative of “who started it” and similarly self-serving characterization of “the status quo.” It also continues to rely almost exclusively on coercive levers in dealing with Taipei, rather than offering positive incentives and proposals for addressing cross-strait differences.

But Washington and Taipei cannot blame Beijing alone for the situation that prevails in the wake of Pelosi’s trip. It won’t be as easy as that, because one of the inconvenient truths is that the “one China policy” has, in fact, frayed in recent years, partly as a result of actions and statements emanating from Washington and Taipei. We cannot pretend that the Three Communiques are no longer relevant or operative—or, if they are, that Beijing is solely accountable for that. Nor can we pretend that Taiwan’s democratization, however heroic and commendable, has invalidated the “one China” framework and superseded the communiques. History is not erased by more recent history; and Beijing’s power, leverage, and interpretation of the communiques cannot be air-brushed away. Taiwan remains caught in a historical trap that Washington and Beijing created (with help from Chiang Kai-shek) more than four decades ago. This is unfortunate and, especially in retrospect, unfair to the people of Taiwan. But those are the circumstances that must somehow be confronted, rather than denied or avoided. Pelosi’s visit has exposed the underlying dilemma in U.S. policy toward Taiwan and brought it uncomfortably to the front burner.