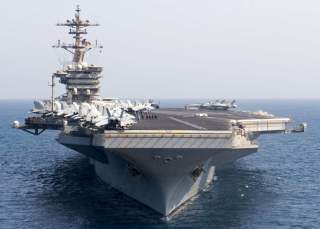 Since 1756, the modern-state system has experienced four global wars; The Seven Years War, The French Revolutionary Wars, World War I, and World War II. The longest global peace came between 1815 and 1914, and it has now been seventy years since the last world war.

Every global war needs a spark.  A conflict somewhere ignites the interest of more than one great power.  World War I had the assassination of Franz Ferdinand; the Seven Years War had desultory fighting between the French and British along the Mississippi River. The combatants do not always appreciate that the sparks can lead to conflagrations.

But at some point things escalate.  Other major nations become involved, and the initial cause of war becomes subsumed under great power competition.  The goal of fighting becomes the establishment of a new global order, and with the increase in stakes comes an increase in the resources committed by the combatants, and the sacrifices that their people make.

“World War III” would, in effect, be the fifth World War in the history of the modern state system. What might spark such a war, and how would it escalate into a global conflict? Here are five potential scenarios, none likely, but all possible:

At the moment, ISIS has drawn the attention of most of the world’s most powerful countries, including France, the United States, and Russia. But the explosion of attention (not to mention air traffic) could complicate the next step in the war. On the one hand, an accidental confrontation between NATO and Russia aircraft could lead to bad tactical decisions, with one or more planes shot out of the air.  On the other, a dramatic shift on the ground in Syria could force the hand of one of the supporters of the proxy combatants.

(Recommended: Is a U.S.-China War Possible?)

Even if the emerging anti-ISIS coalition prevails, conflict between major power could ensue.   This could get ugly, as France, Russia, and the United States have very different views about how the future of Syria should look. If any of the three decide to intervene in favor of their preferred factions, the situation could very quickly come to resemble a game of chicken, with airstrikes, no fly zones, and secure enclaves providing the points of conflict.  Serious fighting between external powers in Syria could quickly draw in Turkey, Iran, and Saudi Arabia, and potentially spread to other parts of the globe.

India and Pakistan could go to war again for any number of reasons. If a Pakistani-sponsored terrorist group makes another attack similar to that in Mumbai, India’s patience could wear very thin. Either state could engage in some adventurism in Afghanistan, perhaps in response to the activity of non-state actors.

Debate over the conventional balance along the border between India and Pakistan has raged for years. But if Pakistan suffered a serious conventional defeat, the use of tactical nuclear weapons might seem like the only way out. If that happens, all bets are off.

The United States has grown closer to India over the past few years, even as it continues to send weapons and cash to Pakistan.  Conversely, China has intensified the relationship with one of its only client states. The 1971 Indo-Pakistani War nearly drew in both the United States and China; in that conflict, both would have intervened on the Pakistani side. It is unclear, at this point, how the United States would respond if China felt that it needed to intercede on Pakistan’s behalf in a war with India.

Over the past two years China and Japan have played a dangerous game around the Senkaku/Diaoyu Islands. Both countries claim the islands, and each has deployed military forces in their vicinity. A naval or air incident could create an upsurge of nationalist hostility in both countries, making it difficult for either Tokyo or Beijing to back down. Moreover, both countries have struggled to control the activities of nationalist groups, leading to additional potential flashpoints.

The United States is bound by treaty to defend Japan.  If a conflict between China and Japan erupts, the United States may find it difficult to avoid entanglement. In context of any kind of sustained combat between Japanese and Chinese forces (not to mention an aggressive Chinese effort to land on the islands), the United States would almost certainly become involved. Given the likelihood that such intervention would prove decisive, China might feel compelled to pre-empt U.S. intervention by an attack on American military installations across the region. This would trigger a broader U.S. response, and throw the entire Asia-Pacific into chaos.

The United States has already had a number of uncomfortable confrontations with Chinese naval and air units in the South China Sea. If an operator lost his or her cool, dreadful consequences could ensue. Similarly, as the United States steps up its involvement with Vietnam and the Philippines, it could become entangled in Chinese military operations against either country.

A U.S.-China war would be bad enough, but depending on the context and course of the conflict, both Japan and India might feel the need to intervene in some fashion. Russia would likely stay out, except insofar as it used its defense-industry to keep the Chinese military operating. War would result in a clash between the U.S. Air Force and U.S. Navy on one side, and the PLA’s anti-access, area denial systems on the other.  Nuclear escalation could happen either accidentally (one side misinterprets a missile launch or targeting decision), or on purpose (China feels the need to staunch the bleeding if its Great Wall at Sea crumbles).

Russia continues to view the political allegiance of the Kiev government as a critical national security interest. If it cannot command that allegiance, then Moscow can take steps to destabilize and weaken the country. Thus far, the United States and NATO have limited their exposure, supporting the right of the Kiev government to resist Russia, but not providing it much in the way of means to do so. The situation is rife with opportunities for miscalculation, and a mistake on either side could produce a militarized confrontation.

Much depends on how NATO countries decide to respond to Russian moves in Ukraine.  If Russia became sufficiently certain of NATO intervention, then it could take steps to pre-empt NATO mobilization.  Any attack, or serious threat of attack, against a NATO country could then trigger a NATO response, which could involve attacks into Russian territory. The Kaliningrad enclave could provide a key flashpoint for escalation, as military forces within the enclave are simultaneously threatening and vulnerable.  And if Russia believes that it cannot prevail with conventional force (a possibility), Moscow could consider the use of tactical nuclear weapons.

In the Cold War, we felt that we had a certain sense of what World War III would look like.  Either the Warsaw Pact would invade NATO along the central front in Germany, or one of the two superpower would launch a pre-emptive nuclear attack designed to disarm the other. In either case, the consequences would be dramatic, and nearly immediate.

We now lack such terrifying clarity. War could break out in a number of places, drawing in combatants in unpredictable ways. Combatants very rarely start a global war on purpose; the leaders of the world’s most powerful nations need to be vigilant about the threat of crisis escalation.