How Would We Know If North Korea Really Wants Peace? 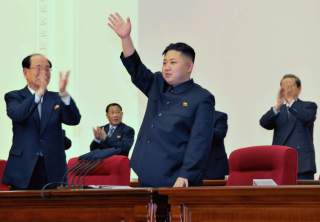 Historically, every peace negotiation between American diplomats with hostile dictators was premised on the idea that the adversary had made a decision to change course. The good thing is that often they have. Think, for example, of Anwar Sadat’s rejection of his quasi-alliance with the Soviets to join the Western camp and make peace with Israel; or Deng Xiaoping’s “reform and opening up,” including his rejection of Maoism, that ignited China’s stunning three decades of growth. There is, however, no indication that North Korea’s Kim Jong-un is following these models. Without a real change from Kim, there is no hope for peace with North Korea, no possibility of complete and verifiable irreversible dismantlement (CVID) of Kim’s weapons of mass destruction, and little genuine interest in opening up to America’s economy.

Kim cannot follow Sadat or Deng’s path without having come to the conclusion that his North Korean regime is at a strategic dead-end. Deng took a sober look at the ravages caused by Mao Tse-tung versus the economic advancement of China’s regional neighbors. He contemplated the threat of a hostile Soviet Union, and calculated he needed protection from Washington. Given these circumstances, U.S. negotiators were convinced that Deng would make a strategic change, and they were right. He opened the door to what could arguably be labeled one of the greatest transformations of the twentieth century.

More importantly for Kim’s calculus, Deng and his successors were able to stay in power notwithstanding “Western civilizational pollution”—as the Chinese Communist Party now calls it—that infected China. Yet that same civilizational pollution brought down the Soviet Union, and all of its East bloc vassals. So, does Kim believe he can survive the onslaught of trade and openness like Deng? Or, that he will face the fate of Mikhail Gorbachev and other long-gone Eastern European dictators who tried to open their countries to the West? Has anyone asked him? Then there is the issue of his geopolitical calculations. Has he, like Sadat and Deng, decided to change his security strategy and lean on the United States?

In short, we have no idea. Kim and his forefathers have been well served by playing all great powers against each other. And that is bad news for CVID. A real commitment to a voluntary and peaceful process of denuclearization would require an equivalent of “reform and opening.” Only the benefits of openness to the world, and the transformational power of global engagement could outweigh the perceived benefits of nuclear strength. The full transparency that denuclearization would demand could also lay bare the Kim family’s many crimes—slave-labor camps and mass murder among them. Kim can only agree to that opening if he is willing to repudiate these many sins against his people, and forgo what has heretofore been a staple of North Korean leadership, the complete subjugation of the people.

How would we know if Kim were embracing radical change? First, he would make clear to his people and to South Korea that North Korea’s borders end at the 38th parallel, and that South Korea exists as a separate country. Second, he would withdraw his offensive weaponry and stop threatening Seoul. Third, he would change his state propaganda’s depiction of the United States as an implacably hostile empire hell-bent on keeping Korea split for its own purposes. Instead, he would enumerate the many times the United States has provided him with security guarantees and publicly accept the U.S. commitment to North Korean economic growth.

For good measure, he would also fire his current negotiators who have threatened the U.S. Vice President. Fourth, he would put an end to his slave labor camps, as he knows that the United States will never strategically partner with the world’s worst human-rights abuser.

Ridiculous? These are the steps that true peacemakers have taken. Only these moves will pave the path to peace for the Korean people. But all are highly unlikely. Why? Because the Kim dynasty has survived mass enslavement, and propagation of the myth that North Koreans must struggle against a hostile U.S. foe and its South Korean “running dogs.” What would Kim tell his people now? That his father and grandfather were wrong? That the North Koreans people have suffered for no reason?

To be sure, there are approaches available to Kim should he wish to change course: he could tell his people that the once hostile Americans have changed, that he needs them to ward off Chinese encroachments, that their struggle was for a better life for their children. But U.S. negotiators have yet to see signs that Kim is changing his propaganda to make this case.

Kim is a master of manipulating Western opinion in the Western press. He has done so to great effect since the South Korean Olympics, and has created momentum for peace in the West. But this public relations offensive is immaterial. What really matters is what Kim is doing in North Korea, and saying in Korean.

The United States has been very clear about its offer to reciprocate for CVID with material largesse. But the unspoken offer on the table is that Kim has a chance to survive in power. The president’s threats of war—aided by economic sanctions—scared Kim and brought him to the negotiating table. Should the United States realize Kim has not made a strategic decision for peace, and is shrewdly seeking sanctions relief for paper commitments to peace, that “maximum pressure” campaign will accelerate. Perhaps if Kim really feels his economy go into shock and a tightening military vise he will go as far as to prepare his people for peace.