Hurricanes Harvey and Irma Will Relieve the Fed's Financial Woes 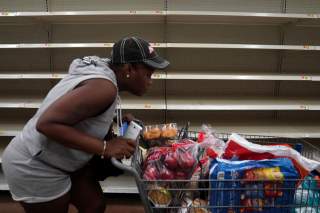 The Federal Reserve may get its wish for inflation. But it comes at a human cost. Harvey and Irma destroyed homes and apartments, forcing people to find alternate accommodation. The consequence—higher rents—will buoy the official inflation figures and complicate the monetary policy outlook.

There are many reasons that inflation has been weak. There is the usual demographic argument—boomers are a drag on inflation as they retire. Debt levels are high. And, of course, Millennials are not picking up the slack like their parents and grandparents did. All of these things remain more or less true, and a couple of hurricanes will not alter the long-term drags they represent.

But the truth of the matter is that Millennials have begun to buy houses, moving out of their parents basements and—more importantly—apartments. Millennials buying homes threatened to derail the one inflationary aspect of the U.S. economy: rent.

Rent is a substantial weight in the official inflation figures, and—depending on which index is chosen—it can be more than 40 percent of the weight. This makes it incredibly important for the Fed in hitting its 2 percent inflation target. And, recently, rent had been decelerating and the trend appeared likely to continue.

With the destruction from Harvey and Irma hitting single family housing particularly hard, the slowing of rent increases may be over for now, reversing one of the Fed’s most perplexing headwinds.

For perspective, prior to Harvey, Houston was overbuilt with apartments, pressuring rent increases. Post-Harvey, this trend will reverse in the medium term as inventory was damaged or destroyed. Current tenants, combined with the demand from people temporarily displaced from their single-family homes, should stabilize or even potentially increase the demand for apartment housing in Houston.

Hurricane Irma will have a similar effect on families displaced in Florida. Florida’s mandatory evacuations will cause the phenomenon to be more widespread. And, consequently, rents in a large swath of the country are likely to begin to strengthen.

Instead of only a few months of impact, the stabilization will have longer lasting effects on inflation metrics. The increase in demand is not likely to be short-lived either as the rebuilding will take time.

For the Fed, a reprieve in rent is an unfortunately welcome development. With the current guidance from Fed officials pointing toward a reduction in its bond holdings beginning as soon as next month, positive developments on the inflation front will lend credence to the policy decision. It will not be apparent that inflation is heading higher until later in the year.  It will take some time for the rent effect will probably begin to filter into the statistics. The question is whether it will be enough to push overall inflation higher or simply stabilize it.

Of course, there will be other inflationary pressures driven by Harvey and Irma, building materials chief among them. Irma could also increase food costs from orange juice to chicken. Yes, mimosas will become more expensive. Gasoline demand increases from the evacuation and return will have a temporary effect. However, building materials only constitute a small portion of the inflation calculation. For its part, food and energy are ignored when setting monetary policy. But rent is not ignored, and it is a critical part of the inflation calculation.

There is nothing positive about the human tragedy associated with natural disasters. Property is lost, and small businesses are disrupted in ways that threaten their survival. Not enough can be said about how life altering and personally destructive natural disasters can be for families. And higher interest rates would not help people rebuild their homes and businesses.

Inflation had been set back by temporary pressures from wireless carrier price wars. This was set to last through at least early 2018. But now, while it comes with a cost, the Fed may get a reprieve from weak inflation sooner than it anticipated. How will the Fed react to this is anyone’s guess. With a complete remake of the Fed coming from the Trump administration, the higher inflation readings are only the beginning of further confusion regarding the direction of monetary policy.

Image: With the destruction from Harvey and Irma hitting single-family housing particularly hard, the slowing of rent increases may be over for now.