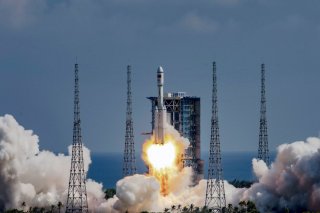 General John Hyten, vice chairman of the Joint Chiefs of Staff and the United States’ second highest-ranking military officer, retired on November 19 following an illustrious forty-year career in the U.S. Air Force. At a Defense Writers Group event on October 28, Hyten delivered a parting shot, saying that “although we’re making marginal progress, the DoD [Department of Defense] is still unbelievably bureaucratic and slow” in its response to China’s rapidly advancing space weapons. Given his access to all relevant public and classified information regarding both China’s emerging space threats and current U.S. responses, Hyten was uniquely well-positioned to speak to whether the United States is presently on track to adequately counter these space weapons. We are not. The Senate confirmation hearing for the next vice chairman, Navy Adm. Christopher Grady, will begin December 2. We must hope that Grady will move quickly to offer an innovative tailored and proactive approach to countering space threats.

The current ossification is not for lack of effort. In January 2020, Hyten declared that “as long as he [was] vice chairman… he [would] make sure speed is put back into every element of the Pentagon.” While speeding up the DoD bureaucracy writ large is an important and worthy goal, doing so will inescapably require many years of concerted effort. And, as Hyten’s statements and recent events both make clear, countering space threats cannot wait that long.

Fortunately, they do not need to. There is much that DoD itself and external space experts—with encouragement from Congress—can and should do to assist DoD in overcoming bureaucratic inertia and lack of innovation in this area. The authors previously recommended that the Pentagon establish a forum in which to collaborate with outside experts on a thorough, case-by-case assessment of the threat characteristics for each existing and next-generation space threat vector, and identify and rigorously evaluate appropriately-tailored solutions.

In view of Hyten’s urgent warning, congressional hearings should be conducted to encourage DoD to establish such a forum and ensure U.S. preparedness to deal with all forthcoming space weapons. The forum would be best structured as a series of workshops, each centered on a hypothetical scenario or set of scenarios designed specifically to elucidate the nature, unique characteristics, and priority level of one particular space threat vector at a time and facilitate evaluation of potential solutions to it. For each threat identified, DoD should be encouraged to either accept the driving scenario(s) proposed by outside experts, or to provide and justify its choice of an alternative scenario. In either case, DoD should then articulate a clear plan for how it will realistically ready an appropriate response to that threat vector in a timely manner.

DoD should draw upon the diverse views of the United States’ excellent space and China experts to assist in the validation of scenarios and analysis of threats, and in the proposal and comparative assessment of potential solutions. There is a clear need for such a forum. The United States has much to figure out, and very little time left in which to do it.

This aligns with the public positions of the U.S. Space Force (USSF). Lieutenant General B. Chance Saltzman, USSF deputy chief of space operations, declared on November 3 that China remains focused on the strategic advantage that can be derived from disabling U.S. capabilities on orbit, and that “it’s such a broad array of counterspace capabilities that they’re pursuing and… what’s most concerning is just the speed at which they are going from ‘good idea’ to full scale capability that’s being demonstrated on orbit.” For this reason, Saltzman calls for “full-scale discussion” regarding appropriate solutions (specifically highlighting hotlines as one important piece of the puzzle).

We believe that one particularly good choice of potential threat for the initial workshop in the proposed series would be hostile rendezvous and proximity operations (RPOs). This is because it is credible, near-term, and has unique characteristics that produce a different threat profile and require different solutions than the current anti-satellite (ASAT) landscape. Further, a prospective Taiwan contingency in the late 2020s would provide one appropriate scenario for evaluating this threat and appropriate solutions. DoD should wholeheartedly invite disagreement regarding the choice of both threat and scenario; The key is for that discussion to publicly occur, and the reasons for and against be made explicit.

China’s rendezvous spacecraft program is advancing quickly. China has been conducting RPO tests in orbit since 2008, and in and around geosynchronous orbit (GEO) since November 2016. Since 2018, at least eleven senior U.S. officials and intelligence agencies have expressed growing concern about a Chinese ability to conduct targeted hostile RPOs. These could be used to produce minimal debris, and operate in orbits where our most critical and vulnerable satellites are housed. Most recently, General James Dickinson, commander of U.S. Space Command, spoke in his April 2021 Senate testimony of “a future [Chinese] system for grappling other satellites.” Despite this, some skeptics have expressed doubt that China is likely to attain the technical capability—or have the desire—to conduct such sophisticated offensive co-orbital operations in the near future.

The past few months have heavily undercut this position. First, the technical capability to conduct such RPOs is inevitable. After all, Northrop Grumman subsidiary Space Logistics carried out the first successful docking with another GEO satellite back in February 2020. But detractors have pointed to the difficulty of that operation as a reason to believe that China is still many years away from being capable of achieving a similar feat, at least at the necessary scale and with uncooperative targets. Even if this were true, the series of time-consuming steps required in advance to adequately counter this threat would warrant the United States immediately beginning preparations.

But recent events suggest the threat will likely come much sooner. In September 2021, the Shanghai Academy of Spaceflight Technology (SAST) officially unveiled the “Supplemental Service Aircraft,” a spacecraft for commercial servicing that “takes over attitude orbit control of GEO satellites at the end of their lifetime to extend their in-orbit service life.” This reportedly comes on the heels of successful on-orbit tests of docking and refueling with the Tiangong-2 space laboratory. Then, on October 23, China launched the Shijian-21, a classified spacecraft also developed by the SAST which, according to Chinese state media Xinhua, is intended to “test and verify space debris mitigation technologies”—that is, the ability to close with, manipulate, and capture space objects—in GEO. Beginning November 1, another object was cataloged maneuvering with it, akin to past Chinese ASAT tests. That China has classified this satellite and its mission despite claiming it is for peaceful purposes should offer a warning.

As for motive, threat characteristics, and potential impact, the proposed scenario is illuminating. General Mark Milley, Chairman of the Joint Chiefs of Staff, testified before the Senate in June 2021 that President Xi Jinping had directed the People’s Liberation Army to accelerate its military modernization efforts, instructing it to achieve the capability to successfully seize Taiwan by 2027 up from 2035. In October, Xi gave a public speech vowing that “the task of complete reunification of China must be achieved, and it will definitely be achieved.” Counterspace capabilities would play a central role in any such effort.

Rendezvous spacecraft—at least those designed specifically for co-orbital ASAT use—may prove highly attractive as a means of deterring the United States from intervening on Taiwan’s behalf or hampering the U.S. military’s operations should deterrence fail. By pre-positioning rendezvous spacecraft in close proximity to many strategically vital U.S. satellites at once during peacetime, China would gain a unique ability to conduct ASAT attacks with no prior warning, against many targets at once—and, importantly, the ability to threaten explicitly or implicitly to do so. Depending on the weapons chosen, these attacks could be permanent or reversible, and debris-producing or not. This could uniquely endanger a number of key U.S. constellations which are otherwise likely to be relatively safe.

China has begun intelligent mass production of small satellites in the past year, and reliably dedicates enormous resources to military space programs. It also possesses a large, expanding, and heavily government-linked commercial space industry targeted at both small satellite manufacture and servicing operations. For these and other reasons, we assessed for a China Space Wargame conducted in May 2021 that, in addition to RPO-capable spacecraft intended for commercial servicing, China should be capable of manufacturing on the order of some two hundred small rendezvous spacecraft for dedicated ASAT use by 2029 should it judge doing so to be in its interest.

This would be more than enough ASAT spacecraft to severely threaten the entire constellations responsible for missile early warning (about a dozen satellites); communications in a nuclear disrupted environment (about a dozen); positioning, navigation, and timing (about three dozen GPS satellites); and key communications, imagery, and meteorology functions (several dozen). Sudden loss of even one of these constellations—the majority of the United States’ GPS satellites, for example—could have devastating consequences.

China may conclude that threatening such assets—or even striking them in the early stages of a Taiwan Strait crisis should U.S. intervention appear likely—will give the United States pause about intervening on Taiwan’s behalf and convince Taiwan to give up without firing a shot. Such a “peaceful reunification” would be the ideal outcome for Xi. If this gamble is successful, the consequences for the United States’ global alliance system could be severe. Even worse might be the consequences if they are wrong. Absent prior clarification of the U.S. response, escalation could be swift and unpredictable. At a minimum, fighting without these satellites would increase costs in blood and treasure; but there are also concerningly plausible pathways by which such strikes could precipitate nuclear miscalculation.