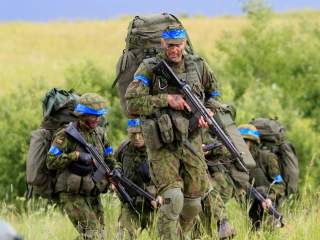 Significant progress has been made in improving the defense situation in the Baltic states since 2014, but NATO can take some relatively modest steps to further enhance its deterrence and defense posture in the region, according to a report by Michael O’Hanlon and Christopher Skaluba, which was based on an Atlantic Council study visit to Lithuania. The Atlantic Council was kind enough to include me on the trek, which began in Lithuania’s capital, Vilnius, and included visits to troops in the field and the port of Klaipeda. I largely concur with Mike and Chris’s comments and supplement them below with several additional observations.

First, one can understand the preoccupation of Lithuania’s senior political and military leadership with the country’s security situation. Lithuania has had a difficult history with the Soviet Union and Russia. Some in Vilnius believe that Moscow regards the Baltic states as “temporarily lost territory.”

A Russian military invasion of the Baltic states is not a high probability. However, the Lithuanians cannot ignore a small probability, especially in light of the Kremlin’s recent rhetoric, the Russian military’s ongoing modernization of its conventional forces and exercise pattern of the past five years, and Russia’s use of military force to seize Crimea and conduct a conflict in Donbas.

When the Lithuanian Ministry of National Defense (MNOD) looks around its neighborhood, it can see specific reasons for concern. Russia is upgrading its military presence in the Kaliningrad exclave on Lithuania’s southwestern border. The MNOD now counts Kaliningrad as hosting some twenty thousand Russian military personnel, including a naval infantry unit and substantial anti-access, area denial capabilities, such as advanced surface-to-air missiles. The Lithuanians assess that the Russian military could mount a large ground attack from Belarus, to the east of Lithuania (the border is less than twenty miles from downtown Vilnius). These forces are backed by an additional 120,000 personnel in Russia’s Western Military District, including a tank army. Russia has substantial air assets in the region as well as warships in the Baltic Sea.

For its part, Lithuania can muster fourteen thousand soldiers and sailors (four thousand of whom are conscripts serving just nine months). They are backed up by five thousand volunteers, similar to the U.S. National Guard. Under NATO’s enhanced forward presence program, a German-led NATO battlegroup adds 1,300 troops, mainly from Germany, the Netherlands and the Czech Republic. In addition, NATO member air forces rotate small fighter squadrons into Lithuania to provide air policing for the Baltic states.

Second, Lithuania has a logical plan to enhance its defense capabilities. The MNOD is making good use of its defense dollars (Lithuania now meets NATO’s two percent of gross domestic product goal, having tripled its defense expenditures over the past six years). Eschewing shiny objects such as F-16 jets, the MNOD focuses on upgrading the capabilities of its two primary ground units, a mechanized brigade and a recently-established motorized brigade. The main procurement programs of the past three years have purchased infantry fighting vehicles, self-propelled artillery and short-range surface-to-air missiles to equip the brigades.

In the event of war, the forces in Lithuania would likely fight a defensive holding action while awaiting NATO reinforcements. The MNOD and Ministry of Transport are working together to enhance the country’s ability to flow in NATO forces, including by upgrading the roll-on/roll-off capacity at the port of Klaipeda and building a European standard gauge railroad line from Poland to the main base of Lithuania’s mechanized brigade. The railroad line, which obviates the need to change the railroad gauge at the Polish-Lithuanian border, a cumbersome process involving changing out the wheels of railcars, ultimately will be extended north to Latvia and Estonia.

Third, the Lithuanians value NATO’s enhanced forward presence in the form of the NATO battlegroup. The battlegroup is fully integrated into Lithuania’s Iron Wolf Brigade, and in wartime would come under the tactical control of the brigade. The rotational NATO force is based with and trains side-by-side with major elements of that brigade.

One potential question is, if Russian forces were to cross the border and the Iron Wolf Brigade deployed, then how quickly would the NATO battlegroup take the field with it? The latter would need a NATO command to do so, and likely also national authorizations from Berlin, The Hague and Prague. Hopefully, those authorizations would be transmitted early as a crisis developed so that the NATO battlegroup could deploy immediately. It adds significantly to Lithuanian combat capabilities, including by providing the only armor unit in the country.

Fourth, as pleased as Vilnius is to have a NATO military presence, the Lithuanians very much would like to add a U.S. component to it. With a U.S. armored brigade combat team deployed in Poland on a rotational basis, the U.S. military has the assets to consider periodically rotating an armored company to Lithuania (and to Latvia and Estonia). These rotations would be useful military exercises in case there is a crisis that requires a reinforcement move from Poland to Lithuania through the Suwalki Gap.

Lithuania is moving in the right direction in bolstering its defense capabilities, with prudent steps taken over the past six years and sensible plans for the future. As Mike and Chris point out, modest steps by NATO and, I would argue, the United States could significantly add to the Alliance’s deterrence and defense posture in the Baltics.

Steven Pifer is a William Perry fellow at Stanford’s Center for International Security and Cooperation and a nonresident fellow with the Brookings Institution.