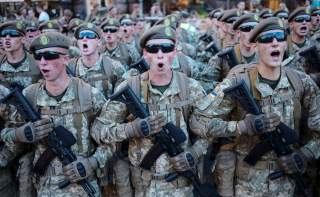 Near the Ukrainian town of Avdiivka nine large industrial chimneys stretch into the distance. They belong to the Avdiivka Coke and Chemical plant, one of the largest Coke producers in Europe. Since the war in eastern Ukraine between government forces and pro-Russian separatists began in the spring of 2014, this factory has been on the front line. Yet it has kept operating throughout the conflict, for locals a symbol of pride and necessity. The plant is also a key to keeping people employed and the heat flowing in winter in this part of Ukraine.

The conflict in eastern Ukraine’s Donbass region is often portrayed as “frozen,” but the reality on the ground, witnessed during several days on the front line with Ukrainian soldiers and through interviews with local military spokesman and experts in Kiev, is very different. Although the ceasefire line that resulted from two Minsk agreements in the fall of 2014 and February 2015 is static, there is constant fighting at night. The world is watching this conflict. In late July, Ukraine participated in NATO exercises called Noble Partner in Georgia alongside the United States, the UK, Germany, Turkey, Slovenia, Armenia and Georgia. At the same time, Vice President Mike Pence was in the Baltic states speaking of continued American support. Ambassador Kurt Volker was recently named special U.S. envoy to Ukraine with a mandate to work to resolve the conflict. Reports also emerged that the United States is considering supplying Ukraine with anti-tank missiles. All of this comes amidst heightened tensions with Russia over allegations of Moscow’s meddling in the U.S. election.

The current framework in eastern Ukraine is based on the 2015 Minsk II agreement and its thirteen-point plan that was supposed to lead to elections and some kind of peace. Heavy weapons over one hundred millimeters in caliber were withdrawn from the front and around 150 miles of front line became stationary. But it did not become quiet. Lt. Col. Aleksander Samarsky of the Seventy-Second Mechanized Brigade in Avdiivka says “it is the static phase of an active phase.” He describes the separatists as “gangsters who have captured state power and did an anti-state coup. As a military commander I can either arrest or eliminate them.” At the moment that is not what higher-ups in Kiev want, so the Donetsk and Lugansk People’s Republic remain a challenge.

According to the Office of the United Nations High Commissioner for Human Rights, through the summer of 2017 slightly over ten thousand people have been killed in fighting and every month dozens of civilians and soldiers on both sides are killed. There were nightly exchanges of machine-gun, mortar and rifle fire while I was at the front line in Marinka and other border areas near Donetsk in early August. A local Ukrainian military spokesperson showed a list of daily violations of the ceasefire that stretched to three pages and included civilian and military wounded as well as instances of use of 120-millimeter mortars, which are a serious violation of Minsk II. He said the list was not public, but the Organization for Security and Co-operation in Europe (OSCE) Special Monitoring Mission that monitors the ceasefire provides daily reports on violations. For instance, the OSCE notes that on August 9, while monitoring with a UAV, it “heard two bursts and three single shorts of small arms fire.” Cameras the organization has installed have been shot at and destroyed, hampering its efforts. According to the OSCE, around twelve thousand people cross the ceasefire line every day.

For Ukraine the war has been a crucible through which the country has formed a more united identity. Prior to 2014, the nation was riven with deep political disputes that often pitted the Russian-speaking east against the more nationalist Ukrainian-speaking west. This translated into policy as well, as President Viktor Yanukovych, who was forced from office in 2014, was closer to Moscow, whereas previous presidents, such as Leonid Kuchma, had sought closer relations with the European Union and NATO. There are many Russian-speaking soldiers on the front line in the east among the volunteers who streamed to fight the separatists in 2014. The last three years have brought clarity to Ukraine’s purpose by forcing people to choose sides and providing the state the chance to challenge Russian media, sever economic ties and roll back what some described as “Russification.”

The war has provided the impetus to reform the army as well. Lt. Col. Anatolii Stelmakh, a spokesman for what Ukraine calls the “Anti-Terror Operation” against separatists said that the war has created the “conditions for reform . . . we cannot fight using old Soviet standards. We are modernizing ourselves and we want as close to NATO standards as possible.” This translates into symbolic changes, such as having officers study English, or encouraging changes to make noncommissioned officers more independent. Eventually it will need to involve changes in weapons platforms and ditching the AK-47 in favor of new rifles. So far on the front line there doesn’t seem to be much evidence of that. Some of them men still have AK-47s that date from as far back as the 1960s.

The Ukrainian army, which faced many setbacks in 2015, is in high spirits today. Despite lacking some modern equipment, such as drones or night vision devices, local Ukrainian officers such as Col. Vyacheslav Vlasenko, who commands the volunteer Donbass Battalion in Marinka, say the Russian-backed separatists could be pushed back if the army gets the order. Despite rumors of Chechen and other volunteers bolstering their ranks, they are not as strong as they appear, says the colonel. “I was trained at the Moscow military academy with the guys [we are] fighting against and I recognize their tactics.”

The problem Ukraine faces is that the country does not want a full-scale war with Russia. “We want to have NATO as an ally in any kind of future war,” says Stelmakh. Ukraine believes it has the international community on its side in its dispute with Russia over Crimea, and also in the east. The longer the war goes on, the stronger its hand. That includes the continuing modernization of the army and hopes that new equipment from the West can replace ageing Soviet-era hardware.

A key to replacing that hardware is total reform across the economy and armed forces. At the Ministry of Defense, the Ukrainians are trying to change their process of procurement and logistics. One insider—who spoke anonymously—said that the reforms are backed by NATO and include a “philosophy based on democratic control, reform of the defense management resources, battle structure, training, centralization and logistics reforms.” This is to increase the “power behind the punch” that the military can bring to the field.

The general view among many experts and soldiers in Ukraine seems to be that Russia gambled and lost in 2014. It had a much stronger position before the Maidan protests, but once Yanukovych was removed from office and the separatists began trying to take control of eastern Ukraine, the country mobilized against them. Ukraine has lost Crimea and under-populated coal mining districts in the east, but it has won greater independence of action and given itself the space to fully embrace NATO and the West. This is the opposite of what the Kremlin wanted.

The question today is what is the next step. Will this low-level conflict eventually reach a real ceasefire and can the separatist areas be incorporated back into Ukraine? Or will they morph into a model like South Ossetia and Abkhazia in Georgia or like Transnistria; other Russian-supported statelets. The current feeling is that the chances for a resolution to the conflict are low today. Ukraine doesn’t stand to gain much by having to invest in reincorporation or fight to get the areas back. Russia doesn’t lose much by continuing its support of the breakaway republics. With the United States concentrating on other issues internally, and the EU distracted, the current stalemate seems likely to continue.