If America Topples North Korea and Iran, What Happens Next? 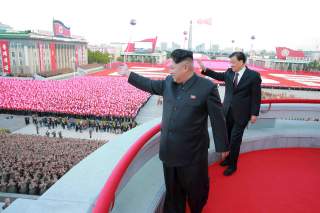 On October 19, National Security Advisor H. R. McMaster declared that President Donald Trump was not going to accept the North Korean regime threatening the United States with a nuclear weapon. “He just won’t accept it,” McMaster reported. “There are those who have said, ‘What about accept and deter?’ Well, accept and deter is unacceptable.” McMaster was speaking at a conference organized by the Foundation for the Defense for Democracies—a small but influential Washington think tank. Its leaders advocated the invasion of Iraq in 2003 and now provide intellectual fuel for McMaster, CIA Director Mike Pompeo, and others, such as the Wall Street Journal editorial board, which called for “The Regime Change Solution in Korea.”

Regime change also motivates neoconservative efforts to “renegotiate” the Joint Comprehensive Plan of Action—a deal struck by the United States, China, France, Germany, Russia and the United Kingdom in 2015 to keep Iran from acquiring nuclear weapons. President Trump announced on October 13 that he would no longer certify that the deal is in the national-security interests of the United States. Congress, by law, now has until mid-December to decide whether and how to respond. Republican Sen. Tom Cotton has taken the lead in designing a more coercive approach in order “to get a better deal.” Cotton has said that if tougher sanctions don’t work, they “will at least buy time for more devastating military action.” The threat, he says, “is not the nature of Iran’s weapons; it’s the nature of Iran’s regime.”

Removing hostile regimes, including by means of military action, is the logical solution if one concludes that a “rogue state” cannot be deterred. This thinking drove the George W. Bush administration’s invasion of Iraq. Many champions of that operation have now reemerged within the Trump administration and on its friendly periphery. North Korea and Iran are the two remaining members of President Bush’s “Axis of Evil.”

The predilection to vanquish the North Korean and Iranian governments may or may not lead to war. But, the perception that the United States is seeking the removal of North Korea’s and Iran’s governments certainly has perverse effects that remain underappreciated and underdebated in Washington and the country at large, notwithstanding the Iraq experience.

History shows that threatening authoritarian governments does not compel them to stop building nuclear weapons and missile systems. Rather, it spurs them to speed the development of these weapons in order to deter foreign attacks and subversion. Close observers of North Korea conclude that threats from the United States hasten North Korea’s development and testing of both nuclear warheads and missiles of ever longer range. North Koreans say that Libya’s Muammar el-Qaddafi would not have met his ignominious defeat and death in 2011 had he not given up his nuclear program in 2003. (Gaddafi, in fact, had no significant nuclear capability; what matters here are the perceptions of the North Koreans). The legendary Indian general, Krishnaswamy Sundarji, famously quipped that the lesson of the 1990 war in Iraq was: “If you are going to fight the United States, you better have nuclear weapons.”

Nearly all American and international experts on North Korea have concluded that it is impossible to compel the Kim Jong-un dictatorship to give up its nuclear arsenal, but that it is possible to deter the regime from committing aggression against South Korea or the United States. North Korea’s regime threatens its neighbors, commits “unspeakable brutality against its own people,” and imprisons or murders “anyone who seems to oppose that regime,” as Lt. General McMaster says. Stalin’s Soviet Union and Mao’s China did all of these things—killing tens of millions of their own people—yet nuclear deterrence worked against those leaders and their successors.

The MIT scholar of deterrence, Barry Posen, cites one of the larger contradictions that dooms the regime change approach: “Kim cannot be both so irrational that he cannot be deterred in general, and so rational that he could be deterred after having been attacked by the United States.” Similarly, if Iran’s leadership is as determined to acquire nuclear weapons and then more aggressively project violence throughout the Middle East, as many in Washington assert, why would Tehran be willing to negotiate more stringent constraints on its nuclear program and other activities? And why would Iranian leaders do this when Washington has lost the backing of Europe, Russia, China and other major international powers that will not support further sanctions and military action against Iran?

President Trump is right that the governments of North Korea and Iran repress their people and menace their neighbors. Their societies and the world would be better off if these countries had benign leaders. But history shows that it is one thing to remove a hostile government and an entirely more difficult project to shape what replaces it.

Fourteen years ago, the United States invaded Iraq, removing Saddam Hussein and the Baathist regime in the name of countering proliferation of “weapons of mass destruction.” What came after that regime change has been disastrous in many ways. The Communist regime of the Soviet Union collapsed in 1991, due to internal failings and inability to sustain an over-militarized empire. Much good resulted from this. Yet, twenty-five years later, Russia is run by, and for, the “strong men” of the former Soviet deep state and their associates. These men brandish nuclear weapons as proudly and menacingly as their predecessors did. This summer, exiled Russian chess master Gary Kasparov reflected on the United States’ ongoing struggle over the changes wrought by the Civil War: “We learned in Russia that tearing down monuments isn’t enough. Those who would rebuild them must also be removed.” Lasting, healthy regime change usually occurs slowly and organically from within a country.

Even if Washington could directly or indirectly cause the toppling of despised governments in North Korea and Iran, what would happen next? Would the dysfunction in the executive branch and Congress magically end so that the United States would provide the long-term resources and guidance necessary to enable North Korean and Iranian societies to fare better than Iraqis and Afghans have since 2001? Lamentably and dangerously, the confusions and contradictions of the regime changers are barely recognized and debated in the United States today. As we near the precipice of what could be nuclear war on the Korean Peninsula, it is hard to see what could be more urgent.

George Perkovich is the Olivier and Nomellini Chair and vice president for studies of the Carnegie Endowment for International Peace.