If Australia Wants Collective Defense, Then It Should Get Its Own Navy in Ship Shape 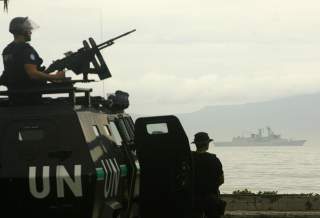 With the South China Sea dispute back on the front burner and trade tensions between the United States and China bubbling over, some of America’s regional allies are starting to feel the heat. Yet when Mike Pompeo told a Sydney forum that “You can sell your soul for a pile of soybeans or you can protect your people,” Australia’s good and great were “gobsmacked,” according to an eyewitness account from The Spectator Australia. Substitute a lump of Australian coal for a pile of American soybeans, and Pompeo’s message was clear.

China’s rise and rearmament has introduced a security schizophrenia into Australian politics. Canberra’s China doves argue that Australia should accommodate its giant neighbor and number one export partner, sign up to Xi Jinping’s Belt and Road Initiative, and do whatever it takes to avoid attracting China’s ire.

Meanwhile a certain species of Australian hawk believes that the United States is no longer a reliable ally, and that Australia should muscle up for a potential future confrontation with China. The most prominent of these is Professor Hugh White of the Australian National University, who thinks that Australia should be considering the development of an independent nuclear deterrent.

He’s not alone in worrying about American staying power in the Pacific. One of Australia’s most prominent conservative commentators, Paul Kelly, says that “the strong and astute America [that Australia] needs is not on display,” while the governor of Australia’s central bank says that he does “not have a clear idea of what strategy the U.S. has” for dealing with China.

Now a major research paper from the University of Sydney’s United States Studies Centre concludes that the United States “no longer enjoys military primacy in the Indo-Pacific” region and “has an atrophying force that is not sufficiently ready, equipped or postured for great power competition.” The paper was partly funded by the Australian Department of Defence, American defense giant Northrop Grumman, and the French multinational Thales Group.

The paper’s authors, Ashley Townshend, Brendan Thomas-Noone, and Matilda Steward, call for a NATO-style strategy of “collective defense” in the Indo-Pacific as a “way of offsetting shortfalls in America’s regional military power.” They repeatedly highlight the “decline,” “inadequacy,” and “questionable abilities” of the United States Armed Forces.

Meanwhile they laud Australia’s “significant submarine modernisation” program, which consists of the construction of twelve new diesel-electric boats to enter service in the 2030s and 2040s. Australia’s Defence Minister Christopher Pyne has described the submarines “regionally superior,” which only makes sense if the region they’re talking about is Southeast Asia. He can’t mean the Indo-Pacific region. India and China already have nuclear-powered attack and ballistic missile submarines.

They also praise Australia’s “surface vessel recapitalisation” program, with nine new frigates to be built on a British design. Like the submarines, these likely won’t enter service until the 2030s. They are mainly designed for anti-submarine warfare, but as the Royal Australian Navy’s new workhorse vessels, they will have to do general duty as well.

They criticize the United States for planning to buy “only” 2457 fifth-generation F-35 fighters and cancelling the F-22. For the record, Australia has committed to buying just seventy-two F-35s in total. They expect to have ten by the end of the year. The USAF, Navy, and Marines already fly more than three hundred.

A Look in the Mirror

If Australians really are worried that the United States is no longer able to come to their defense, then perhaps they should take White’s advice and take a long, hard look in the mirror. No one expects a country of twenty-five million people to match the military spending of a global superpower thirteen times its size. But since the turn of the millennium, Australia has spent an average of only 1.8 percent of its Gross Domestic Product on defense, compared to 3.7 percent for the United States.

What the Australians do spend, they often spend inefficiently. For example, Australia’s politicized navy is buying diesel-powered submarines out of an ideological aversion to nuclear power. The United States, which has a real fighting navy, hasn’t built a diesel submarine since 1959.

There are also questions about readiness. Australia’s two main naval bases, Fleet Base East and Fleet Base West, are located in the pleasant southern cities of Sydney and Perth, ideally placed to defend the country against the march of the penguins from Antarctica. Meanwhile the U.S. Marines are sweating it out in Australia’s remote northern outpost of Darwin, where they serve as a rapid reaction force ready for deployment throughout the Indo-Pacific region.

The Royal Australian Navy's Sydney headquarters is particularly self-indulgent. Strategically stationed in the posh inner-Sydney suburb of Potts Point, the RAN’s top brass can comfortably grab a croissant on their morning walk to work from subsidized housing in one of Australia’s most expensive neighborhoods. In 2018, the city of Sydney wanted to acquire the base, which has golden sunset views of the landmark Sydney Opera House and Harbour Bridge, to use as a cruise ship terminal. The Navy turned them down.

Yet the base is incredibly insecure—and incredibly dangerous. Pedestrians walk on a public inner-city street within ten yards of the bows of the nearest ships. The whole base is hemmed in by a city park on one side and a luxury hotel on the other. Any decent quarterback could hit six ships with bombs lobbed from the park overlooking the base; a determined terrorist could sink half the fleet with a portable rocket launcher. Even an onboard accident could take out the civilian hotel just one hundred yards away.

A serious fighting navy would move north to the country town of Townsville, fifteen hundred sea miles closer to any potential threat emanating from China or emergency arising in the Pacific. The RAN has refused to move out of congested Sydney Harbour to nearby suburban Botany Bay. They say the reason is “tradition.” Another word for it is “lifestyle.”

Australia’s Fleet Base West should also be relocated fifteen hundred sea miles north to Port Hedland (population fifteen thousand). Australia’s iron miners tough it out on the country’s remote northwest coast, but then they have to: that’s where the iron is. The RAN prefers the comfortable climate and urban amenities of metropolitan Perth (population two million). And who can blame them? But if Australians prefer the good life to the rigors of military readiness, they’re in no position to demand additional American sacrifices on their behalf.

The Political Reality of Collective Defense

As the experience of NATO amply demonstrates, “collective defense” is really just a polite way of saying “American defense.” When it comes to collective defense, what is everyone's responsibility becomes no one’s responsibility—except America’s. In 2018, America’s European NATO allies spent an average of 1.5 percent of GDP on defense, in flagrant violation of their long-standing commitments to raise spending to 2 percent. Only five NATO members meet their 2 percent spending commitments: three frontline Eastern European countries, the United Kingdom, and the United States.

Australia is an important political ally that has provided welcome symbolic support for American missions in Afghanistan, Iraq, and (most recently) the Persian Gulf. Australia lost forty-one soldiers in fierce fighting in Afghanistan after taking up the call of Operation Enduring Freedom. Americans will always be grateful and proud to have Australians standing beside them in time of need.

But if Australians are serious about defending freedom in the Indo-Pacific region, then they should take a more active role in their own defense. That means buying the most effective weapons systems available and deploying them as efficiently as possible. It also means accommodating and hosting American forces, when its own aren’t sufficient to do the job. But most of all, it means making a genuine commitment to security partnership.

Opinion polls consistently show that the Australian people are willing to take on these responsibilities. It’s long past time for Australia’s political class to step up to the plate.