If Bowe Bergdahl Deserted, Prosecute Him 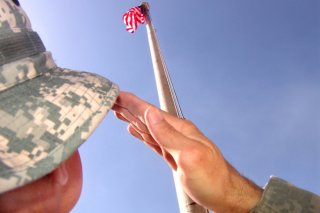 This weekend, we received the happy news that Sergeant Bowe Bergdahl, who for nearly five years had been the only American soldier held prisoner by the Taliban, had been freed. President Obama proudly touted the release as "a reminder of America’s unwavering commitment to leave no man or woman in uniform behind on the battlefield." Almost immediately, however, uncomfortable questions cast a shadow.

First, many critics questioned the wisdom of legitimating—indeed, perhaps incentivizing—the Taliban's taking of prisoners by giving them a five-for-one deal. But Paul Pillar is right: we're fighting a war in Afghanistan and, however fuzzy their Geneva Convention status, Taliban fighters captured on the field of battle are essentially enemy prisoners of war and POW exchanges are a longstanding tradition. That they may eventually return to the battlefield is less than ideal but the American combat role in Afghanistan is rapidly winding down and releasing enemy fighters is the cost of getting our man back.

Second, some Congressional Republicans are angry that the administration did not consult with Capitol Hill as seemingly required by statute. While the administration's "exigent circumstances" argument is laughable given that the "weeks of painstaking negotiations" on this swap certainly allowed thirty-days' notice, the fact of the matter is that presidents quite frequently take actions in the national security arena based on their judgment, the law be damned, daring Congress to do something about it. This particular flap is unlikely to have legs, simply because of the powerful emotional appeal at stake. It's hard to disagree with Secretary of State Susan Rice who sharply noted on ABC's "This Week," that "Sergeant Bergdahl wasn't simply a hostage; he was an American prisoner of war captured on the battlefield. We have a sacred obligation that we have upheld since the founding of our republic to do our utmost to bring back our men and women who are taken in battle, and we did that in this instance." She added, "We had reason to be concerned that this was an urgent and acute situation. Had we waited and lost him, I don't think anybody would have forgiven the United States government." Given the endless hearings on Benghazi, with which Rice has some familiarity, there's little doubt about that.

Third, however, is an issue that has been quietly bubbling beneath the surface these past five years and is now seeing the spotlight: the likelihood that Bergdahl deserted his unit and was vulnerable to capture, because he had left the protective perimeter of their base.

Nathan Bradley Bethea, a former Army infantry officer who "served in the same battalion in Afghanistan and participated in the attempts to retrieve [Bergdahl] throughout the summer of 2009," claims that "every member of my brigade combat team received an order that we were not allowed to discuss what happened to Bergdahl for fear of endangering him. He is safe, and now it is time to speak the truth. And that the truth is: Bergdahl was a deserter, and soldiers from his own unit died trying to track him down."

This seems to be the prevailing judgment of those in a position to know the facts. Sergeant Matt Vierkant, a member of Bergdahl's platoon, echoes Bethea's words: "Bowe Bergdahl deserted during a time of war, and his fellow Americans lost their lives searching for him." The same report contains several other quotes, mostly anonymous, from former members of Blackfoot Company, who have started a Facebook page subtly titled, "Bowe Bergdahl is NOT a hero" and have shared their disdain for their former comrade.

For now, the Obama administration is rightly withholding judgment. Secretary of Defense Chuck Hagel deferred questioning on "Meet The Press" about Bergdahl's actions before capture, observing, "This is a guy who probably went through hell for the last five years, and let's focus on getting him well."

That's the appropriate tone for now. Until the facts are established after a full investigation, Bergdahl deserves the presumption of innocence from the chain of command. But there's reason to believe that he's getting more than that. A "senior defense official" quoted in multiple reports has declared that punitive action is unlikely, regardless of whether Bergdahl is found to have deserted, on the basis that "five years is enough."

The indirect count may well be higher. Not only did Bergdahl's going missing get fellow soldiers killed in the search, the search itself compromised the mission. As Bethea notes, Bergdahl's disappearance "translated into daily search missions across the entire Afghanistan theater of operations, particularly ours. The combat platoons in our battalion spent the next month on daily helicopter-insertion search missions (called "air assaults") trying to scour villages for signs of him." Not surprisingly, "The searches enraged the local civilian population and derailed the counterinsurgency operations taking place at the time." Bethea contends, not unreasonably, that this anger translated into untold attacks on American forces that might otherwise not have happened. That counterfactual is, of course, unprovable. But it reminds us that desertion in combat is a serious offense.

Traditionally, we've treated it that way.

Bethea reminds us that we've previously shown little compunction about prosecuting deserters even after they've been released by their captors. He points in particular to the bizarre case of Charles Robert Jenkins, who defected to North Korea in 1965 and was held under what amounted to house arrest there for decades before eventually being allowed to leave to receive medical treatment in 2004. He turned himself in to U.S. authorities and pled guilty to desertion and aiding the enemy. Jenkins was given a mere thirty-day sentence along with a dishonorable discharge and reduction of rank to private. Presumably, this was a function of his poor health, advanced years, and the fact that his desertion was at least partly motivated by his being highly intoxicated at the moment of decision.

We live, alas, in a different time. For the past four decades, we have had an all-volunteer force and we have long since come to see all who serve as heroes. The American public, which feels a twinge of guilt that others risk so much while they enjoy the fruits of freedom at home, reflexively Support the Troops. The politicians who pander to them are loathe to burst their bubble.

Considering the depths to which the popular view of the military sank as the Vietnam War drew to its end, the pendulum swinging a bit too far in the opposite direction is a problem about which I won't complain too much. But the fact of the matter is that not every person who dons a military uniform and deploys to combat is a hero. If it turns out that Bergdahl's former comrades-in-arms are right and he did in fact desert his post that night—getting at least six American soldiers killed as a direct result—then supporting the troops means prosecuting him to the full extent allowable under the Uniform Code of Military Justice.

James Joyner is an associate professor of strategic studies at the Marine Corps Command and Staff College and a nonresident senior fellow at the Brent Scowcroft Center of International Security at the Atlantic Council. These views are his own. You can follow him on Twitter: @DrjJoyner.