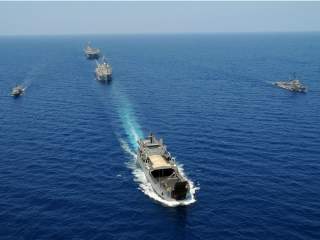 There is a Goliath menacing the western Pacific. China’s construction of three huge artificial islands with obvious military capacity in the South China Sea has already destabilized the security equilibrium in the region. Given the rising tensions and outright challenges to the established international security order in the western Pacific, it is time for the United States to align its Foreign Military Financing (FMF) program with its Pivot to Asia initiative, in order to strengthen the region’s Davids. Foreign Military Financing has already been used to great effect in other regions, such as Europe and the Middle East, to reestablish an equitable balance of power. Now is the time for a substantial increase in western Pacific foreign military aid as well.

Despite frequent protests on the part of regional actors and legal actions in international tribunals, Beijing continues to plow ahead with its wantonly belligerent behavior towards its smaller neighbors, who have legitimate claims over vital food and energy resources in the region. For example, China has attacked, with both water cannons and bullets, native fishermen seeking to make a living in their own territorial waters and internationally recognized extended economic zones. China has also harassed, shouldered, rammed and sunk fishing boats. It has wrought untold devastation on the environment through its destruction of coral reefs as well as its unfettered and unmanaged plundering of fishing stocks, all in waters not its own. In the end, in an act of utmost arrogance, it has invited the very nations it injured to take the initiative and repair their relationships with China. These are invitations to accept the supplicant and suzerain relationships of the earlier Middle Kingdom era, when China exerted outsized influence over the region and trampled its neighbors underfoot.

Japan, Taiwan, the Philippines, Vietnam, Brunei and Singapore have been increasingly united in their resistance towards Chinese aggression, but their unity, though powerful symbolically and legally compelling, can go only so far in the face of China's rapidly expanding military capacity and capabilities. They will need new platforms adept at complicating China's territorial designs and integrating with allies, partners and neighbors. Defense companies within the United States produce platforms that are of high quality and sufficient quantity to satisfy this demand, but the smaller nations of the western Pacific lack the defense budgets to acquire them. The United States, however, has a powerful tool in its Foreign Military Financing program, which is administered jointly by the State Department and the Department of Defense, which can assist with this task.

Historically, the United States used foreign military aid to stabilize Europe following the devastation of World War II as the shadow of communism hung over the continent, and to bring about stability in the Middle East following the negotiations of the Camp David Accords. While funding varies depending upon local conditions, Israel currently receives $3.1 billion in FMF assistance and Egypt receives $1.3 billion per year. The net result has been sustained peace and cooperation between the two former enemies and a broader sense of stability in the region. With spending in Iraq and Afghanistan decreasing commensurate with the withdrawal of American forces, there is a benefit in freeing financial resources that could be reallocated to the western Pacific, enabling critical allies and partners in the region to confront Chinese designs.

The Philippines, for instance, provides an excellent opportunity for American strategic investment through the FMF program. Currently the archipelagic nation receives $40 million in FMF funding, and its own internal defense spending has recently been increased by 25 percent to a total of $550 million—about the cost of one modern frigate—although spread across its land, air and naval components. This is what the Philippines has to confront a hegemonic aggressor on its doorstep that spends $145 billion and has aggressively increased its defense spending by 10 percent per year for the past decade. This is truly a David vs. Goliath scenario, and David doesn’t have his sling with him at present. However, the Philippines does have two valuable stones in its bag: its relationship with the United States and its geography.

Manila’s relationship with Washington has had its ups and down. At first the islands were liberated from Spanish rule by the United States, only to chafe as a colony under its rule until the 1930s. After being liberated again (from the Japanese this time) by its erstwhile friend, the the United States and the Philippines settled into a back-and-forth relationship centered on a 1951 security treaty. The relationship hit a low during the 1980s and early 1990s that resulted in the U.S. military leaving its longtime bases in the islands in the face of rising Philippine resentment and nationalism. Still, among national security professionals, ties have remained pragmatic and strong. Today, in the face of China’s aggression in the South China Sea, the tide of popular opinion is changing and there is a growing desire for a greater U.S. presence in the region, including more frequent visits by U.S. forces to the islands.

Geography has its role to play as well. When Chinese strategists fret over the confining nature of the first island chain, which runs from Japan down to the strait of Malacca, the Philippines looms exceptionally large in their considerations. Composed of over 7,000 islands, the Philippine archipelago spans over 1,150 miles from north to south, effectively blocking Chinese routes to the central and south Pacific regions. Military forces based in the Philippines would find themselves only 600 miles from the Chinese mainland, but the islands’ current order of battle, comprised of antiquated ships, armament and aircraft, are not enough to complicate China’s calculations with regard to the South China Sea. This is where the United States’ Foreign Military Financing could come in.

If the Philippines were given $1 billion per year in FMF funding, it could afford to purchase a combination of platforms that could allow it to rapidly modernize its force. It could afford American frigates, based on the current littoral combat ship design, which would allow the Philippine navy to sail alongside its American counterparts performing Freedom of Navigation Operations. Additionally, it could procure Joint High Speed Vessels that would allow the fast transport of men and materials around the archipelago, knitting the nation together into a strategic whole. Finally, FMF funds would allow the Philippines to purchase squadron of American warplanes, perhaps the naval FA-18E/F Super Hornets, which would allow Philippine pilots to become carrier-qualified and participate in joint exercises while flying from the deck of the Japan-based American supercarrier as it transits through Philippine waters. What kind of message would that send to China?

The Philippines would not be the only recipient of FMF funds. Taiwan, Singapore, Vietnam, Indonesia and Malaysia should all be considered candidates for the program, but the Philippines should anchor the U.S. position in the region. FMF has been a mainstay of U.S. defense policy in the Middle East where U.S. national security interests have been focused for the past generation, but as we complete our pivot to Asia, the priority of the FMF program should pivot as well. In the face of aggression, U.S. policies that would allow western Pacific nations to help themselves should rise in importance. It’s time to give David his sling.