If North Korea Collapses: What Happens to Its Nightmare Weapons of War? 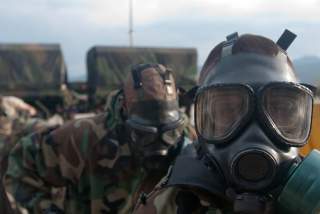 A North Korean collapse is easily one of Northeast Asia’s greatest fears. But what would happen in to Pyongyang’s stockpiles of Weapons of Mass Destruction in such a scenario? A regional crisis could quickly take on global dimensions. With this in mind, the National Interest presents the following article, which was first published at 38 North, a blog of the U.S.-Korea Institute at Johns Hopkins SAIS. It is republished with their permission.

North Korea’s weapons of mass destruction (WMD) pose a number of challenges, particularly how to find and secure those weapons if the regime collapses. This article will look briefly at 1) North Korea’s nuclear, chemical and biological programs; 2) activities coalition forces might conduct in a collapse scenario; and 3) challenges posed by an operation to eliminate the North’s WMD.

North Korea’s WMD programs date back decades and are believed to have produced significant stockpiles of weapons. According to open sources, North Korea likely has upwards of 10-16 nuclear weapons today and potentially up to 100 by the end of the decade. While it is hard to know the degree of their sophistication, it is a safe assumption that they are low-yield (about 10 kilotons), non-boosted, first generation weapons. Few outside of North Korea have a sense of where the warheads and fissile material are stored given the scarcity of intelligence information coupled with North Korea’s proclivity to develop hardened and deeply buried facilities and storage depots. This lack of understanding about the locations of nuclear weapons storage will make finding them before they can be employed or moved in a collapse scenario enormously challenging.

The same intelligence limitations apply to the North Korean chemical weapons (CW) program. While our knowledge about North Korea’s CW stockpile remains limited, it is safe to assume that the North has been producing first generation blister, choking and nerve agents, and conceivable that they have a limited number of more advanced binary agents such as VX or GB. Moreover, the North Koreans probably have CW-armed artillery shells and possibly bulk agent positioned north of the demilitarized zone (DMZ). It is also possible that such shells and bulk agent are located elsewhere in the country, which would further complicate any foreign military movements deep into North Korean territory. While it is impossible to ascertain with confidence how much CW Pyongyang has produced, a reasonable guess would put the North’s annual production capability in the low tens of thousands of metric tons of material.

We know next to nothing of the North Korean biological weapons (BW) program, but they could well be producing BW—or even keeping large stockpiles of agent, as did the Soviets. South Korean officials in recent years have speculated that North Korea could produce anthrax or smallpox but there is little evidence that these statements are anything more than speculation.

Should the United States have to engage in post-regime collapse operations or participate in a counter-offensive aimed at neutralizing an incursion of the Korean People’s Army (KPA) into South Korea, there are a number of challenging tasks that coalition forces may have to perform simultaneously. These will include: 1) locating, isolating and eliminating WMD program elements); 2) managing the consequences (to include humanitarian assistance, decontamination, disaster relief, etc.,) of possible WMD attacks; 3) missile defense; 4) locating, seizing and securing weapons depots; 5) rendering constituted WMD safe through dismantlement of the warhead or weapon delivery mechanism; 6) maritime interdiction to prevent leakage off the peninsula; 7) stopping movement of people and materials of concern along land borders; and 8) dismantlement of possible proliferation networks so that materials of concern or even weapons do not move out of the theater in the midst of a chaotic security environment (such an effort will inevitably take time but should begin soon after the onset of hostilities or regime collapse).

Of course, these operations will likely be done in conjunction with other conventional missions that may be occurring simultaneously, such as humanitarian assistance/disaster response, defeating KPA remnants, force protection and a possible non-combatant evacuation of American citizens out of theater—potentially all while wearing equipment to protect coalition forces from chemical attack, should they be operating in a chemically or biologically contaminated environment. In short, trying to do all of this successfully and near simultaneously could prove too much for coalition forces.

While it is unknown how many chemical, biological or nuclear production plants, depots, storage sites and related facilities exist in North Korea, coalition forces will have to secure these facilities in a timely fashion. Failure to do so could enable the use or transfer of these weapons to hostile actors. That mission requires these forces to  identify, locate, secure, disable and destroy WMD programs in non-permissive environments (where an adversary is actively engaged in combat operations) or semi-permissive environments (certain areas of operation are non-contested, but contain pockets of irregular or organized  armed resistance such as was the case during worst days of the Iraqi insurgency).

The Department of Defense’s mission to locate and secure adversary WMD programs began to mature in earnest after the 2003-2005 search for Iraqi WMD. Since then, DOD has updated the concept of operations, force structure and policies accordingly. Should coalition forces execute a WMD-elimination operation on the Korean peninsula, the 8th Army (comprised primarily of the Second Infantry Division) stationed in South Korea likely would request technical forces from the United States Army, such as Nuclear Disablement Teams (the United States has two 11-man teams comprised of Army 52 Nuclear Physics Specialists, Medical Officers, etc.), technical escort units (capable of examining chemical and biological facilities), planners from the US Strategic Command’s (STRATCOM) Standing Joint Force Headquarters Elimination (SJFHQ-E), subject matter experts from across the US government, as well as certain specialized South Korean units to form a Combined Joint Task Force for Elimination (CJTF-E). The CJTF-E would be tasked with executing the WMD-elimination mission.

The CJTF-E’s job would be to go to suspected WMD sites, examine them for additional intelligence (primarily to locate other sensitive WMD-related sites, such as for weapons storage), secure related materials and disable/destroy sensitive program related equipment. North Korean personnel with specialized knowledge would be sent to another location within theater for further debriefing. The CJTF-E almost certainly would be augmented with personnel from across the US government, such as the Departments of Energy, Homeland Security, Justice, Health and Human Services, as well as the Intelligence Community on an as needed basis.

There are limitations on what a Joint Task Force for Elimination can do. There are a large number of unidentified sites in North Korea and, as was noted earlier, the United States and its allies do not know the precise location of key storage facilities. Second, DOD has a very limited number of technical units and experts capable of conducting these operations. Third, the problem of translating technical Korean into English will be a monumentally challenging task given the specialized nature of the language, the sheer number of documents these teams are likely to uncover and the dearth of American Korean-language speakers.

The most time consuming and manpower intensive operational task of the elimination mission will be exploitation and site characterization. These efforts will require Nuclear Disablement Teams and/or technical escort units to enter a suspected WMD site, detain any personnel encountered, search for documents or media that can provide additional information and conduct a physical survey of the facility in order to locate and identify WMD-related equipment or materials. Personnel, media and documents seized will have to be reviewed, analyzed or debriefed in order to determine not only the nature of the site, but also the location of other heretofore unknown WMD facilities. This process will require Korean-language translators who are conversant in technical aspects of WMD production, and may well be time consuming, repetitive, and by its very nature, extraordinarily challenging.

Moreover, since most sensitive DPRK sites will be heavily guarded, it may be hours, days or even weeks before the CJTF-E can gain access to those sites, whether they come from the air (with an Air Assault brigade), from the sea (with a Marine Air Ground Task Force) or behind ground maneuver forces. As a result, high-demand assets such as Nuclear Disablement Teams or technical escort units may find themselves exploiting a single WMD site for intelligence and therefore unable to move to other high-priority sites for an extended period.

Taking these challenges into account, there are a number of additional problems that could occur in the course of a WMD-elimination operation. To begin with, the United States may not have the required elimination or general purpose forces in theater in order to begin that effort should North Korea collapse quickly. This lack of forces in theater could result in a delayed start to elimination operations and allow the North Korean regime or its remnants time to use WMD against coalition targets with potentially catastrophic impacts. Alternatively, a failure to secure North Korean WMD in a timely fashion could enable regime elements to trade WMD technologies, know-how, materials or even constituted weapons to third parties in exchange for safe passage out of theater. This potential for WMD proliferation could itself trigger an additional crisis of the first order.