If Putin Nukes Ukraine, Russia Could Win the War 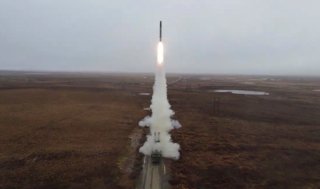 Having failed in his initial effort to achieve a coup de main against Ukraine and his subsequent campaign to occupy territory in the east and south of that country, Russian president Vladimir Putin has figured out a way of winning by appearing to lose. His recent moves, announcing a partial mobilization and undertaking referenda in the occupied territories on their joining Russia, are precursors to the use of nuclear weapons against Ukraine.

If Ukrainian troops, armed with an array of Western weapons, continue their counteroffensive, they will pose a threat to the Russian homeland in the form of its newly acquired territories. Putin will respond by doing what he has repeatedly warned he would do: employ nuclear weapons. Whether such a use is against a target in Ukraine or just a demonstration shot, the effects would be the same. Such a move would undoubtedly undermine Western support for Kyiv, given that the United States and NATO are virtually certain not to respond in kind. It could also lead to the collapse of the NATO alliance. In essence, Putin might win by losing.

Western leaders and defense experts had long mulled over the possibility that in the event its conventional campaign against Ukraine failed, Moscow would resort to the use of nuclear weapons. That possibility has now become a virtual certainty. Putin has doubled down on a conventional war that he cannot win if the current correlation of forces is maintained. The West is beginning an industrial and military expansion that will further tip the strategic balance against Russia. Russia has already had to seek help from the weakest of allies—Iran and North Korea. Partial mobilization will not provide the Russian army with the means to reverse the situation on the battlefield and will exacerbate opposition to Putin at home.

But by escalating, Putin can achieve victory both abroad and at home.

Russian nuclear doctrine explicitly states that if conventional aggression against Russia threatens the existence of the nation, this would justify the use of nuclear weapons. The definition of how far a conventional attack would have to proceed in order to cross this threshold has never been clear. Putin framed such an existential threat in his speech announcing partial mobilization. He reiterated his claim that the West’s goal in supporting Ukraine is to destroy Russia and threaten all Russian people. Putin made it clear that it is permissible for Moscow to employ nuclear weapons in order to protect the nation’s territorial integrity which would now include the seized portions of Ukraine:

I would like to remind those who make such statements regarding Russia that our country has different types of weapons as well, and some of them are more modern than the weapons NATO countries have. In the event of a threat to the territorial integrity of our country and to defend Russia and our people, we will certainly make use of all weapon systems available to us. This is not a bluff.

The citizens of Russia can rest assured that the territorial integrity of our Motherland, our independence and freedom will be defended—I repeat—by all the systems available to us. Those who are using nuclear blackmail against us should know that the weathervane can turn around.

What will NATO and the West do if Russia responds to Ukraine’s successful conventional offensive with a nuclear weapon? It is virtually certain that NATO would not respond with an equivalent nuclear move. Anyone who has played in high-level U.S. or NATO wargames over the last several decades, as I have, in which the other side used nuclear weapons against us has come away with the realization that it is extremely difficult to get Washington—much less the NATO alliance—to respond in kind, even if U.S. forces or NATO troops are the target of such an attack. Unless the attack is massive, the teams representing the U.S. government and NATO countries almost always opt for an intensified conventional campaign or back down.

Were Putin to use a nuclear weapon against Ukraine, Western options would be even more limited. Ukraine is not a NATO member and is not protected by the alliance’s nuclear umbrella. Western leaders would find responding with the use of a nuclear weapon unfathomable. As one experienced former U.S. government official and nuclear arms control negotiator opined regarding how Washington would respond to a Russian nuclear detonation: “I do not believe the United States would take an escalatory step. Certainly, it would not respond with nuclear weapons.” You can bet that Putin knows this.

Western leaders, most prominently U.S. president Joe Biden, have promised to respond to Russia’s use of nuclear weapons by doubling down on their support for Ukraine, providing it with more and better conventional weapons, expanding economic sanctions on Russia, and trying to enlist the global community to make Russia a pariah state. This was Biden’s warning in his recent speech to the UN General Assembly. In essence, the West would seek to continue with precisely the strategy that led to Putin’s use of nuclear weapons in the first place. This is the definition of insanity: doing the same thing over again expecting a different result.

The provision of additional Western military gear to Ukraine, including more HIMARS launchers, long-range missiles, advanced drones, heavy armor, and even F-16 fighters, will ensure that Ukraine can hold off the Russian army. But it will not end the war.

In fact, the likely Western response would play right into Putin’s hands. His initial nuclear use would be met with a less than proportionate response, demonstrating Western weakness. Moscow would have gotten away with using a nuclear weapon, shown that deterrence was meaningless, and set itself up to use nuclear weapons again in the future. Putin’s fortunes at home would certainly improve. He would claim to be the Russian leader that stood up to the West and got away with employing a nuclear weapon to defend the Motherland.

Putin believes that the war in Ukraine is essential to defeating the existential threat to Russia posed by NATO expansion and its efforts to create a client state in Ukraine. In this context, the use of nuclear weapons is justified. So too is the risk of Western escalation. As Putin declared in a 2018 interview, nuclear first use would make sense, even if it produced a global catastrophe. After all, he said, “Why do we need such a world if there is no Russia there?” A leader who is willing to go past the brink to defend the Motherland will garner profound respect, or better, fear, in Russia. That should be good enough for Putin.