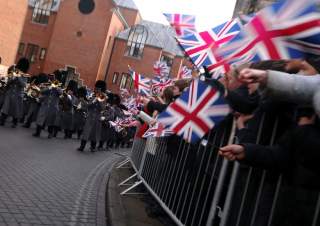 Britain’s nuclear arsenal represents a more difficult issue, since the country’s Trident nuclear weapons are kept on submarines, whose home port is the Faslane base in Scotland. It would take many years and up to £20 billion to build similar basing facilities in England. So unless the English government can persuade the Scots to abandon their current plan to go nonnuclear, Britain’s deterrent would immediately come into question. This might not be a major source of regret in Washington, since some American strategists are increasingly dismayed by the proportion of Britain’s dwindling defense budget that is eaten up by maintaining a nuclear deterrent, while more useful capacities are sliced away. Nonetheless, Britain’s defense strategy would be immediately thrown into crisis by Scottish independence. In addition to the nuclear weapons, some 50 percent of the Royal Air Force’s combat aircraft would have to redeploy south of the border.

Some analysts assume that an independent Scotland would swiftly reverse its position on nuclear weapons—particularly since a decision to go nonnuclear might complicate Scotland’s effort to join NATO. One possible deal that has been mooted posits that England might agree to share the pound with Scotland in return for maintenance of the nuclear status quo. Yet such speculation may underestimate the extent to which the SNP is wedded to an antinuclear theology. The party’s campaign documents refer to Trident missiles as “an affront to basic decency.” The SNP’s position on nuclear weapons is part of a broadly left-wing approach to foreign policy that might cause surprise and irritation in the United States. For the Scottish Left, it is axiomatic that one of the malign effects of union is that Scotland has been dragged along as the United Kingdom slavishly joined in “illegal” American wars, particularly in Iraq.

Would all this matter for the broader Western alliance? One well-placed observer who argues that Scottish independence would be a calamitous blow is Lord Robertson of Port Ellen, himself a Scot and a former secretary general of NATO. In a recent speech in Washington, Lord Robertson argued, “For the second military power in the West to shatter this year would be cataclysmic in geopolitical terms.” It would, he said, “rob the West of a serious partner just when solidity and cool nerves are going to be vital. . . . The forces of darkness would simply love it.”

Lord Robertson’s argument extends well beyond the practical issues of nuclear weapons and air-force bases. The pessimists fear that the breakup of the United Kingdom would be a major blow to the confidence of a hitherto outward-looking and engaged international power. It would inevitably consume an immense amount of political energy for the government in London. If Scotland were to vote for independence this September, that would not be the end of the matter. On the contrary, it would mark the beginning of a tortuous process of divorce negotiations. The administrations in Westminster and Edinburgh have pledged to conduct any such negotiations in good faith. But divorce proceedings have a habit of getting nasty. It is certainly possible to envisage a stalemate emerging on any number of issues, from the currency to the division of the national debt to nuclear weapons. If Parliament in Westminster were unhappy with the result of independence negotiations, it would be within its rights simply to refuse to repeal the Act of Union until a more satisfactory deal were struck. The result would be an unholy constitutional mess, generating bitter feelings on both sides of the Scottish-English border.

THE VISION of Scotland breaking away from the United Kingdom would also have pan-European and even global implications. Other would-be nations—from Catalonia to Quebec and from Tibet to Chechnya—are watching the process with fascination.

The government of Spain, in particular, is deeply uncomfortable with the very process of a Scottish referendum on independence, let alone the prospect that Scotland might indeed become a sovereign nation. That is because the movement for Catalan independence is stronger than it has been for many years, and is also demanding a referendum on independence. But Catalonia accounts for a much more significant share of Spain’s population, GDP and cultural riches than Scotland represents in the United Kingdom. As a result, Scottish independence could provoke a crisis both within Spain and within the broader European Union. The Scottish Nationalists proclaim themselves to be proud pro-Europeans (unlike, they argue, the English, who are held to be narrow-minded, anti-European xenophobes) and have always assumed that an independent Scotland would either remain as a member of the EU or would swiftly gain readmittance. But there is a very real prospect that Spain would attempt to thwart a Scottish application to join the EU, in an effort to show the Catalans that independence would mean isolation within Europe.

A row over Scotland would provoke bitter arguments within an EU that is already in the grip of a profound economic and political crisis. The picture would be further complicated by the hapless Cameron’s promise that Britain will hold a separate referendum on its own membership in the EU by the end of 2017. The effects of Scottish independence on Britain’s attitude toward Europe are unpredictable. It could make the British less confident about going it alone. On the other hand, the polls suggest that the English are slightly more hostile toward the EU than the Scots, meaning that a United Kingdom without Scotland would be a little more likely to leave the European Union as well.

The British like to believe that the way in which they are allowing the Scots to vote on independence will set a global example of the civilized and democratic way in which to handle separatist and independence movements. It is certainly hard to think of many other instances of nations that would allow themselves to be broken up by democratic means. The independence referenda that Canada has allowed for Quebec represent one obvious example. The peaceful division of Czechoslovakia is another. Elsewhere, from Tibet to Chechnya to (so far) Catalonia, separatist movements tend to get short shrift from established national governments. In the modern era—from South Sudan to Eritrea to East Timor to the former Yugoslavia—new states that have broken away and established themselves as independent nations have tended to do so against a background of violence.

In the abstract, it is possible that the Scottish independence referendum could provide an inspiring example of how to handle these issues in a civilized manner. As a practical matter, it is delusional. When Russia organized the breakaway referendum in Crimea, for example, Vladimir Putin and his supporters cited the Scottish precedent as a justification for Crimean self-determination. Of course, the difference between an agreed-upon, meticulous process that takes place over years and one that was rammed through in days using force should be patently obvious. Even so, the idea that boundaries can be redrawn within Europe to accommodate national aspirations is a potentially disruptive one. (Newly assertive Hungarian nationalists might also take note.) The Scots insist that theirs is a “civic” nationalism, not an ethnic nationalism—but the distinction is likely to be lost on the likes of Putin and Viktor Orban.

Still, if it happens, for all the difficulties and irritations involved in negotiating the divorce settlement, there are few countries that are better prepared to handle the process than the United Kingdom. Decades of decolonization have given the British plenty of practice in drawing down the flag and marching away with dignity. It can be done again. For all the understandable anxieties of Lord Robertson and others, England’s self-confidence and ability to play a role in the world would survive the blow of Scotland’s separation. The British managed to absorb the loss of the American colonies, the independence of Ireland and the independence of India—and still retained a strong sense of their own identity and greatness as a nation. If it came to it, they would absorb the independence of Scotland without too much fuss.

Gideon Rachman is the chief foreign-affairs columnist at the Financial Times.