If the Civil War Had a Different Ending 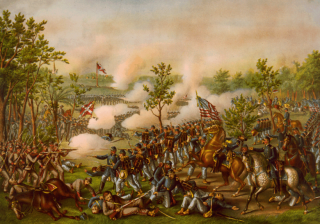 Some American conservatives appear to revel in discussing what the world might be like if the United States didn’t exist—a sentiment today indulged by Dinesh D’Souza’s new film “America.”  Nevertheless, while Americans are justifiably proud of their past, and of their contributions to the world, independence for England’s North American colonies was bound to happen sooner or later.  And the nation that emerged was likely to draw heavily upon its colonial master’s classically liberal political and legal traditions, though possibly expressed differently if the country emerged later with other leaders.  Still, this world-without-America speculation can be both thought-provoking and entertaining.  In that spirit, as Americans celebrate July 4, they might also consider an independence day that didn’t happen and how different America and the world might be if it had.

If the American Civil War had ended other than it did—or if the federal government and the northern states decided to pursue a negotiated separation from the south—residents of the Confederate States of America (CSA) might still be celebrating their Independence Day over one hundred and fifty years later, perhaps on December 24 (the day in 1860 when South Carolina declared its independence) or on February 9 (when, in 1861, the thirteen southern states formed the CSA).  It is, of course, impossible to know what the USA, the CSA, and the world would look like after this alternate history—there are too many variables over too much time.  But it is an interesting thought experiment nonetheless.

For someone who lives in northern Virginia and works in Washington, DC, one of the first possible consequences that comes to mind is a local one.  Would Washington have remained the capital of the United States?  On one hand, the capital was already here, meaning that the federal government had invested significantly in infrastructure and buildings.  On the other hand, in an environment of enduring tension between the USA and the CSA, the city would have been exposed and hard to defend.  Many key national symbols did not exist yet; when the Civil War started, the Washington Monument had been sitting unfinished and essentially untouched for seven years. Moreover, Washington only became the capital because of a political compromise between northern and southern states that relocated the nascent government from Philadelphia.  Had things turned out differently, might modern-day U.S. politicians be denouncing “Philadelphia bureaucrats” and “Market Street lobbyists”?

While a relatively minor issue, the American capital’s location highlights how central the USA-CSA relationship would have been in any subsequent history.  A negotiated separation may well have preserved the deep economic interdependencies between north and south, avoided and contained the passions expressed during the Civil War, and allowed for a form of peaceful coexistence.  Even in this most favorable case, however, Richmond would likely have been fertile ground for European powers seeking to constrain the northern states.  At the same time, strong abolitionist sentiment in the north would have continued.  Enduring slavery in the south could well have provoked considerable political tension if not armed skirmishes along the border if committed northern activists attempted to maintain and expand the Underground Railroad for escaped slaves or even to foment rebellion inside the CSA.  This could well have led to war sooner or later.

Conversely, if the Civil War ground on indefinitely without a northern victory or if the south managed a decisive battlefield success, perhaps at Gettysburg, it could have broken the north’s will and won independence in an eventual political settlement.  Had this happened, the two new neighbors would have started with a much more tense and bitter relationship.  And while the north would have been militarily and economically dominant, the south would have had important leverage of its own—including, for example, control of the Mississippi River Delta and therefore of the river trade that proved so important in developing the American Midwest.  The CSA would also have been in a better geographical position to exercise influence in the Caribbean Sea, though it would have needed a major naval construction program to succeed at this.  Some leaders in Richmond might have seen this as strategically essential, however, to protect the southern states’ access to international markets and to block U.S. or European navies from the Gulf of Mexico.

The latter point raises an interesting question: if the CSA endured as an independent country, would the 1898 Spanish-American War have taken place in the same way?  The war resulted from America’s intervention in Cuba to support a rebellion against Spain.  But what if the CSA supported the Cuban rebels, rather than Washington, attempting to secure its southern coast with a friendly government in Cuba?  Would the United States have aligned with Spain, perhaps allowing Spain to keep its empire a bit longer?  Or what if the USA supported the rebels but the CSA sided with Spain, perhaps in exchange for territorial concessions in some of its other colonies?  Would the United States still have ended up controlling Spain’s imperial possessions, including the Philippines?  If not, would the USA been equally concerned about—and equally capable in resisting—Imperial Japan’s expansion in Southeast Asia?

Moving into the twentieth century, it is difficult to know how long the CSA could have sustained the abominable institution of slavery.  Would the south evolved into an apartheid-style society by doing away with legal slavery but maintaining second-class status for its former slaves?  Absent external pressure, a two-tiered discriminatory society could well have survived for some time, as others did elsewhere.  Would the north have attempted to apply pressure on the south to change its ways?

Meanwhile, how would the north have evolved?  If the strongest advocates for a weaker federal government had left the union rather than remaining within it, would the United States have tilted further in the direction of federal power and northeast/liberal political and social values, with the populous east more easily dominating independent-minded settlers in the American West?  If so, how would the US political system have reacted to the rise of the labor movement?  Might the USA today look more like European Union countries today?

World War I, World War II, and the Cold War could also have been quite different.  Germany’s Zimmermann Telegram, an intercepted diplomatic message outlining a strategy to recruit Mexico to support Berlin in World War I with promises of reclaiming lost territory, shows clearly that the Central Powers were thinking about how to distract the United States and limit its involvement in the war.  A USA-CSA rivalry on the North American continent would have provided a much bigger opportunity for mischief.

In the 1930s, would southern political leaders have sympathized with Adolf Hitler’s racist worldview?  By this time, the CSA would have been hard-pressed to call itself a democracy if a white minority enjoyed substantially greater political and economic rights than what could by then have become a black majority (the Confederate States were about 40% black at the time of the Civil War).  Could World War II have led to a replay of the Civil War with deadlier weapons and with bombers attacking USA and CSA cities?  Would the allies have been able to defeat Hitler if the United States couldn’t contribute as many troops, ships and planes to the invasion of Italy and to D-Day while fighting off a hostile neighbor or at least maintaining large garrisons?  Or, equally ominous, could Josef Stalin’s Red Army have ground its way across Europe to seize Berlin unaided, perhaps only by 1947, avoiding the division of Germany but producing a united communist German Democratic Republic?  Would France have then fallen to communism too?  The Cold War could have become a time of Soviet containment of the United States, rather than the reverse, with only America’s atomic bombs preventing an attempted invasion.

By the 1960s and 1970s, the CSA would probably have faced severe challenges as colonial systems collapsed globally under pressure from national liberation movements.  What we call the civil rights movement today could have been far bloodier, looking much more like a revolution.  The USA’s response could have been decisive.

In US politics, the country would have done without many if not most of its post-war presidents.  On the Democratic side, there would be no Lyndon Johnson (Texas), Jimmy Carter (Georgia) or Bill Clinton (Arkansas), though one can imagine Johnson in particular as an influential politician in the CSA.  On the Republican side, no “southern strategy”—something that could have significantly affected Richard Nixon and every subsequent Republican candidate (and, of course, who became the Republican candidates).

If the CSA still existed in 2014, it seems likely that U.S. foreign policy today would be profoundly different.  Likely without the clear military successes and the resulting strong sense of self-assurance that developed during the twentieth century, America would be a much smaller place in not only territory, but in aspirations.  Perhaps ironically, it might be even more moralistic in its foreign policy rhetoric if it lived next to an oppressive and discriminatory state for well more than a century—but much less able to impose its moral vision on others.