If the INF Treaty Dies, America and Russia Could See an Arms Race 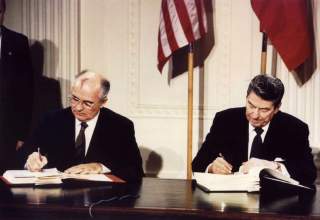 On November 8 the U.S. Senate approved the allocation of $58 million for research and development program on a ground-launched intermediate-range missile as part of National Defense Authorization Act, FY 2018. Herewith, it is stated that the scope of this program should “comply with Intermediate-Range Nuclear Forces Treaty”—the treaty does not stipulate the ban for research and engineering of related technologies. According to this act, the taken measures respond to breaking of the INF Treaty by Russia. The situation is actually much more complicated, and the allocation of money for development of intermediate-range ballistic missile (IRBM) will draw INF Treaty closer to dissolution than ever before. It’s symbolic that this escalation is happening near the thirtieth anniversary of signing the INF Treaty. The treaty aimed to make nuclear deterrence stronger and demilitarize Europe by banned all missiles that had a maximum flight range between 500 to 5500 km.

America and Russia Have Difficulties with Adherence

The United States and Russia have been accusing one another of violating the INF Treaty in recent years. American military and political elites routinely accuse Russia of ground-launched cruise missile (GLCM) development, with range exceeding 500 km. The missile in question is called 9M729 (U.S. designation SSC-X-8) and, apparently, it can be used with Iskander-M Tactical Ballistic Missile System. Development of a missile with such a designation has been indirectly corroborated by Russian officials, but its technical specifications are unknown. There is no credible information on the deployment of a significant quantity of these missiles. However, one can assume that Russia has been preparing for a probable dissolution of the INF Treaty and developed a ground-based modification of the 3M-14 sea-launched cruise missile—of "Kalibr" family—with the possibility of setting up large-scale production. If such an assumption is true, then 9M729 can hit targets with high precision from a distance of more than 2000 km.

The RS-26 "Rubezh" is another advanced mobile intercontinental ballistic missile (ICBM) that is drawing protests from the United States. Technically, it complies with INF Treaty with a range of more than 5500 km, but it could also be used at the relatively small distance of 2000 km. This missile is versatile to the point that it can function both as an ICBM and an IRBM. However, the text of the INF Treaty says, “the range capability of a GLBM not listed in Article III of this Treaty shall be considered to be the maximum range to which it has been tested.” Therefore, Rubezh does in fact comply with the treaty. In order to provide further clarity, it would be advantageous to America and Russia to conduct extra negotiations and amend INF Treaty relating to such cases.

The deployment of the antiballistic missile (ABM) system Aegis Ashore in Romania and Poland is a particularly annoying to Moscow. Russia is worried because the SM-3 antimissile batteries are placed in Mk41 Vertical Launching Systems, which can be also used to launch Tomahawk cruise missiles (with maximum range up to 1600 km). The INF Treaty bans the production of IRBM launching platforms, so this would constitute a direct noncompliance with the treaty.

Another controversial point is the development and use of medium-range target missiles for testing of the American missile defense systems. For instance, the Hera target missile has a maximum range of 1100 km. In effect, they are no different from regular IRBMs, and the treaty does not contain any explanations for resolving these situations.

The weakest part of INF Treaty relates to the definitions of cruise missiles and unmanned aerial vehicles (MALE and HALE classes). The term "cruise missile" means an unmanned, self-propelled vehicle that sustains flight through the use of aerodynamic lift over most of its flight path, which can lead to confusion with unmanned aerial vehicles (UAV) becoming more ubiquitous. Russia does not yet have such UAVs—though the works on such projects is ongoing. That is why Moscow periodically accuses the United States of INF Treaty violations regarding. Russia clearly intends to build UAVs of the same class as the Western counterparts, which means that the INF Treaty will have to be amended in the near future.

The Dissolution of INF Treaty Could Lead to an Arms Race

The potential withdrawal of one party—either Russia or America—from the INF Treaty would lead to a full dissolution of the treaty itself. This development has two possible outcomes: the parties blatantly restart production of a small quantity of ground-based cruise missiles (development and production of ground-based modifications of "Kalibr" or "Tomahawk" is not a problem) and stop at that; or a more serious arms race will begin. Russia has a better starting position in such a race—it would be quite easy to reestablish production of the RSD-10 Pioneer IRBM (NATO reporting SS-20 Saber). This mobile system was capable of delivering three nuclear 150 kiloton warheads at the distance of 4600 km. This missile allowed Moscow to have all of the U.S. military’s European infrastructure in range. America’s Pershing II missile had much simpler parameters—one 80 kiloton warhead and a maximal range of about 1800 km. Reestablishing its production makes little sense for the United States since the Pershing II would be obsolete. Development of a missile complying with RSD-10 parameters will demand a great deal of  time and funding.

Washington does have a distinct advantage advantage over Moscow though—Russian IRBMs can hit anywhere in Europe, but they cannot hit the continental United States. The U.S. military made sure to deploy missiles within European NATO members’ borders, setting European Russia within U.S. crosshairs. This reality has pushed Moscow to increase its strategic nuclear weapons stockpile and develop new nuclear delivery platforms. One such platform is the  railway-based ICBM Barguzin (development of this project has stopped, but can be easily restarted) or compact Kuryer ICBM (Courier SS-X-26), whose development was not completed by the Soviet Union but can be finished by Russia. Kuryer can be camouflaged as a truck or placed in a sea-bound cargo container. These developments will lead to the evident dissolution of the New START treaty “in chain order” since countries will produce more and more nuclear warheads and will exceed allowed numbers.

Thankfully, such a race would not likely lead to a preemptive strike since deterrence still holds. Russia is still too big to guarantee that all its ICBM launching systems can be knocked out and America would have time to react to a Russian attack due to the great distances missiles must travel to hit the continental United States.

All this can mean the only thing: even large-scale development and production of ground-based cruise and ballistic missiles with maximal range less than 5500 km won’t lead to a change in the balance of power between U.S. and Russian strategic weapons. An uncontrolled arms race in this regard is senseless.

Unfortunately, the worsening of U.S.-Russia relationship does not bode well for reforming the INF Treaty. Additionally, most military and defense officials in both countries favor the dissolution of the treaty. This is not surprising, considering the money that would be invested in either country’s military industrial complex for various upgrades and modernizations. Both American and Russian administrations need to seriously discuss the current situation amend the INF Treaty to match up modern times. UAVs will become even more common in the future, a blanket ban for conventional ground-based long-range cruise missiles does not address this or the other technical challenges to the treaty.

Leonid Nersisyan is a military columnist for the REGNUM information agency, and editor-in- chief for New Defence Order magazine, Moscow, Russia. You can follow him on Facebook.

Image: File photo of U.S. President Ronald Reagan (R) and Soviet President Mikhail Gorbachev signing the Intermediate-Range Nuclear Forces (INF) treaty at the White House, on December 8 1987. [Reagan was elected as the 40th U.S. president in 1980. Former U.S. President Reagan's health is deteriorating and he could have only weeks to live, a U.S. source close to the situation said on June 4, 2004. Reagan, now 93, has long suffered from the brain-wasting Alzheimer's disease. The source said Reagan's condition had worsened in the past week. "The time is getting close," he said.]​