If the Iran Nuke Talks Fail... 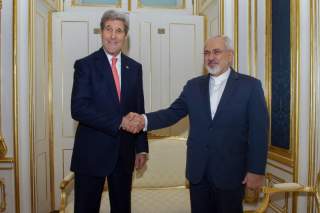 What if the nuclear talks with Iran completely break down at some point, as quite a few people in Congress and the Washington policy community seem to want? We believe the results might be more dangerous for Iran, the United States, and the Middle East than an imperfect deal that keeps Iran a healthy distance from a bomb and gives the United States reasonable confidence that it could catch an Iranian attempt to dash to a weapon, without eliminating Iran's nuclear program.

First of all, the possibility of an Israeli military strike on Iran's nuclear facilities goes up considerably. The Israelis would claim that, having restrained themselves for years while the talks were ongoing, they now had the moral right and strategic imperative to act. It is possible that Israel has been bluffing all along to try to get the United States and international community to act— or that its last realistic window of opportunity to bomb Iran was in 2010-2012 before the deeply buried Fordow nuclear facility became operational rendering an Israeli air strike ineffective.

However, it is also quite possible that lacking a large enough air force for a comprehensive campaign, the Israelis will launch a less ambitious set of strikes, in order to set the Iranian nuclear program back a few years while leaving Iran’s conventional naval and missile capabilities intact.Iran might retaliate proportionally with missile strikes against Israel and using its global network of proxies to launch terrorist attacks against Israeli and possibly American targets.Or Iran could go further, believing that the United States was complicit in the attack and respond conventionally against American naval assets and forces deployed on the Arabian Peninsula, forcing the United States to finish the job through a military campaign lasting weeks against Iran: something that would be worse for Iran than the United States, but that to say the least, we should all want to avoid.

A collapse in the talks could also lead to an escalation of the ongoing regional covert war between Iran and an undeclared coalition of Israel and Saudi Arabia. Mysterious assassinations of Iranian nuclear scientists and senior level Islamic Revolutionary Guards Corps commanders could increase. We could see more rocket launches from southern Lebanon into Israel or a spillover into Europe with attacks such as the Hezbollah bombing in Bulgaria in 2012.

The covert war could also move back into the cyber domain resulting in more cyber attacks on Iran’s nuclear program - but also a resumption of Iranian attacks on U. S. companies, banks, and government institutions, as well as more attacks such as the one that caused major damage to Saudi Aramco in 2012. Such a rapidly deteriorating regional security situation could send oil prices back up towards $100 per barrel and also dramatically increase the possibility of unintended escalation that could draw the United States in.

A collapse of the talks could also lead Iran to abandon its nuclear hedging strategy of the past ten years and instead decide to make a dash for a bomb. Such a decision would force the United States to choose between two terrible options both of which are much costlier than the status quo — pursuing military action against Iran or accepting a nuclear-armed Iran.

Let's be clear: air power alone will not defeat the Islamic State. We cannot defeat the Islamic State, President Bashar al-Assad's forces in Syria, and Iran all at the same time.Some level of cooperation with Iran, however undeclared, however indirect, and carried out exclusively through back-channels will be necessary. A nuclear agreement would set a favorable context for this. As for Iran's nefarious influence on Iraq that many use as an excuse against cooperation with Tehran to defeat the Islamic State, that reality has obtained ever since the American-led 2003 invasion: for reasons of geographical proximity and history, an Iraq partly subjugated by Iran is an inescapable reality until the Iranian regime itself changes. It was only Saddam Hussein's suffocating, totalitarian rule in Baghdad that kept Iran out of there.

There will also be missed opportunities in Afghanistan, where Iran has a long history of opposing the Taliban, and thus can be employed to ease the withdrawal of U. S. forces there.Indeed, in the aftermath of the U.S. invasion of Afghanistan – in probably the closest cooperation the United States and Iran have pursued since the Islamic revolution – Iran played a critical role in supporting the agreement that led to the formation of a new Afghan government. In the aftermath of a nuclear agreement, similar cooperation should be a high priority in the service of protecting our troops.

Perhaps most significant would be the implications for the internal power struggle within Iran. Hardliners still hold most of the cards and they are as extreme and nasty as can be imagined. Nevertheless, Iran also has an elected government with considerable influence and with a demonstrably more benign world view. Never before since the Iranian Revolution have the pragmatists so captured the imagination of the Iranian public, with their vision of an Iran more economically integrated into the global community. The United States should want to help them; not undermine them. If there is a deal, the pragmatic faction’s power and influence will dramatically grow, increasing the likelihood that after the death of Supreme Leader Ali Khamenei, Iran would be led by a more reasonable autocrat.

If instead, Iranian President Hassan Rouhani is discredited through a breakdown in the nuclear talks, hardliners will resume complete control as in the time of former president Mahmoud Ahmadinejad and win the succession fight. That will sabotage the West's ability to work with Iran for years to come.

In the end, it is unlikely that all of the negative consequences and missed opportunities will come to pass, but some of them certainly will.Do we really want that? Congress should think long and hard before it tries to subvert the Iran nuclear talks.

What we’re saying is this: Let's wait a bit longer to see what kind of a deal, if any, the Administration manages to strike with Iran. There will be enough time then for Congress and others to act in order to avoid a sell-out of our principles.

Ilan Goldenberg is the director of the Middle East Security Program at the Center for a New American Security, where Robert D. Kaplan is a senior fellow.