If the Unthinkable Occurred: America Should Stand Up to China over Taiwan 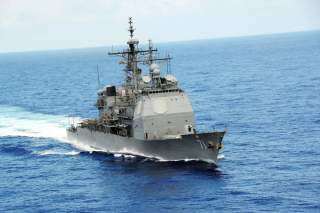 In back-to-back articles published in recent weeks, Hugh White, a professor of strategic studies at the Australian National University, posited that China has become too powerful, and too critical a player in the global economy, for the continuation of tacit U.S. security guarantees to Taiwan, the island-nation that Beijing regards as an inalienable part of China. In White’s bleak worldview, the risks of major conflict—perhaps even nuclear war—are too enormous, and consequently, Taiwan should simply be abandoned to its “inevitable” fate. Not only is this wrong, it’s a very dangerous proposition.

I would first like to thank Professor White for his response to my article “Don’t Let China Swallow Taiwan,” which gives me an opportunity to expand upon and to refine my earlier observations on the subject. Although I have strong disagreements with his argument, his is a position that has enjoyed a modicum of traction in some circles, and as such, it is essential that it be properly countered.

To start with, Mr. White’s response to my piece hinges on a misreading of the assumptions that underlie my argument. I do not, as he claims, subscribe to the “widely held assumption” that the United States is “willing [to] go to war with China to prevent Taiwan being forcibly united with the mainland.” In fact, given the unwillingness or inability of the international community to stand up to Russia over tensions in Georgia in 2008 and Crimea in 2014, I fear that the United States and its Asian allies may not be inclined to take action to prevent the forced annexation of Taiwan, the Taiwan Relations Act notwithstanding. On my most optimistic days, I am agnostic on the matter. But I do maintain, however, that the international community should be willing to stand up to China and signal that commitment accordingly. Nothing would be more dangerous than for Beijing to conclude that aggression would go unpunished and that the United States and a coterie of key allies do not have the will or the capacity to intervene.

Another flaw in White’s argument is that it only provides binary options—capitulation, or the descent into major (perhaps nuclear) war and the collapse of the global economy. He leaves no room for other (and in my opinion, far more plausible) scenarios. The key to the continued existence of Taiwan (or the Republic of China) as a free, democratic and independent state lies not in the ability of the island and its security guarantors to defeat China in a major war, but rather in the strength of its deterrent, a concept that is inexplicably ignored by White. Everybody agrees that major war in the Taiwan Strait, especially one that drags the United States and perhaps Japan into hostilities, would be as devastating as it is undesirable. But the answer to that reality isn’t the abandonment of one’s principles (not to mention that of 23 million people), but instead a firm commitment to war avoidance. As I argued in a previous article, a multifaceted deterrent strategy involving both military and nonmilitary components (sanctions, naval embargo and so on), combined with clear red lines based upon international law, would lower the risk that China—export reliant and beholden to foreign energy sources—would miscalculate and choose the military option to resolve the Taiwan “issue” once and for all.

Ironically, White seems almost convinced that China would be willing to engage in nuclear war over Taiwan, an assumption that is both untested and portrays the leadership in Beijing as a bunch of deranged nihilists. For all its faults, and despite the official rhetoric depicting Taiwan as a “core issue,” it is in my view unlikely that the Chinese Communist Party would unleash its nuclear arsenal over the matter of Taiwan; in fact, I would advance that it is probably unwilling to gamble China’s economy over Taiwan by launching major military operations—all the more so if there is a promise that such a course of action would result in a concerted response on the part of the international community. The logic of deterrence is that it diminishes the likelihood that the international community would be faced with the maximalist options given us by White. (The bluster only works if we believe it—and Beijing wants us to believe it just like the good professor seems to do—as winning without a fight is a foundational element of Chinese military strategy.)

If, however, Beijing were committed to a nuclear policy and willing to cause and suffer millions of deaths to annex Taiwan, a country that is 1/267th the size of China, then I would say that we have all the reasons in the world to oppose it, as giving in to its blackmail would unleash upon the world a beast of unmitigated evil.

White’s realism isn’t a solution; it’s a recipe for chaos. By accumulating enough comprehensive national power, and by crossing the nuclear threshold, states would have free rein to make irredentist or expansionist territorial claims on weaker states, a return to the scorpions-filled bottle pre–World War I, only this time the critters are bristling with nuclear weapons. Not only would this invite aggression by powerful states, it would create incentives for acquiring nuclear weapons and thereby bury existing nonproliferation regimes, not to mention spark arms races all over the planet. If force is the only determinant of international politics, this is the only foreseeable outcome. Moreover, how much comprehensive power would a state assume is necessary in order to get away with aggression? How many nuclear warheads? Rather than bring stability, White’s world would encourage miscalculation.

Abandoning Taiwan to its inevitable fate due to China’s strength (and nuclear blackmail) would also undermine existing security alliances and discredit the agreements, legal and tacit, that have helped maintain peace and stability in the Asia-Pacific over the decades. Such signaling would in turn encourage states in China’s neighborhood to do the necessary to protect themselves should the day come when they, too, are left to fend for themselves. It would indicate that good behavior and peaceful democratization—two qualities that apply to Taiwan—are of no intrinsic value to mankind and therefore not worth defending. And it would also prove that even medium powers (with a population of 23 million people and the world’s nineteenth-largest economy, Taiwan is not exactly a gnat) are not immune to the desires of greater powers.

Lastly, as I pointed out in my previous piece, there is absolutely no guarantee that after acquiring Taiwan (on a silver platter or at the end of a rifle), China’s appetite would be sated. In fact, much like imperialism, territorial expansionism has its own internal dynamics: the more territory one controls, the greater the incentive to push outwards to protect newly acquired real estate. Should Taiwan become part of Chinese territory, Beijing would likely seek to protect the island from neighboring countries (Japan, the Philippines) and U.S. forces in Guam, all of whom would likely have adjusted their military postures due to the proximity of an expanded China to their territories. The vicious circle that this would risk engendering isn’t too difficult to imagine.

All of this shows us that it would be nearly impossible to isolate the absorption of Taiwan from the region in which that transfer of power would occur. A neutral Taiwan is therefore the surest way to ensure stability in that corner of Northeast Asia all the way to the South China Sea.

To quote from Christopher Clark’s The Sleepwalkers, his study of the origins of World War I, “far from being inevitable, this war was ‘improbable.’” The same could be said, perhaps, of alternative scenarios had the international community presented a more credible challenge initially to Nazi Germany, though as David Faber argues in Munich, 1938, Hitler actually felt he’d been stolen the delights of armed conquest by the pact signed with Chamberlain. I am reluctant to use the Nazi analogy when discussing China, but since White raises it, so must I. However, I am far from convinced that China seeks war in the way that Hitler did, and if it did, we would have every reason not to “give” it Taiwan and to make sure it is safely contained in its box. There is more reason to believe that Beijing is un-Hitler-like in that it would heartily welcome a Chamberlain over the Taiwan issue.

Opposing authoritarian China’s designs on Taiwan, and extending to Taiwanese the right to self-determination that is theirs, also need not inevitably lead to war. As discussed in this article, there are several steps that the international community and Taiwan itself can take to reduce the risks of war in the Taiwan Strait, chief among them a strong and concerted deterrent strategy. Surrendering to blackmail by powerful states—White’s prescription—would turn back the clock. In fact, doing so would deny those in China who seek alternatives to belligerence and repression the chance to play a leading role in shaping a new international system. By keeping the aggressors in check, deterrence can buy us time and facilitate the emergence of a leadership in Beijing that is more liberal and perhaps less inclined to throw its weight around. Conversely, give in to coercion and you feed the beast.