If Ukraine Wants the ICC’s Help, It Must Play by the ICC's Rules 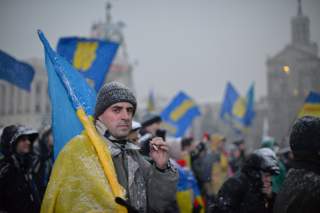 Since Russia’s seizure of Crimea and its aggression in eastern Ukraine, many in Kiev have taken to the idea of enlisting the help of the International Criminal Court in The Hague to punish those responsible and discourage further belligerence. Political leaders in Ukraine, including President Petro Poroshenko, like to publicly invoke the ephemeral “The Hague” as a judicial instance of last resort when describing the future of President Putin, senior Russian officials, militants in parts of the Donbas region and those responsible for the killings during the Euromaidan protests.

At the same time, the widespread use of such vague term as “the Hague” or “the Hague tribunal” in reference to the International Criminal Court indicates that many Ukrainians—including senior officials—do not understand what the ICC stands for and how it works.

But great expectations that the ICC can help Ukraine address past and present injustices, at a time when most Ukrainians do not trust the judiciary, the prosecutor’s office or the police are—at least, currently—in vain. That is because Ukraine has proven reluctant to submit itself to the Rome Statute, the ICC’s basic document. And yet, without ratifying the Rome Statute, Ukraine cannot indefinitely request help from the ICC to investigate and prosecute alleged international crimes, and will not enjoy all the privileges of a member state. Although ratification would resolve Ukraine’s paradoxical relationship to the ICC and be an important step forward, this will not be a panacea for the issue of persecution of war crimes and similar offenses.

To begin with, the ICC is not a substitute for the Ukrainian authorities. There is a widespread misperception in Ukraine that the ICC will do all the work of the Ukrainian national authorities for them. The court does not usurp the role of national courts in prosecuting international crimes, such as the crime of aggression, genocide, crimes against humanity and war crimes. Only if a state is unable or unwilling to take legal action can the ICC step in and prosecute wrongdoings punishable by international law.

Secondly, the ICC cannot address public demand for justice in full, as it usually focuses only on high-ranking perpetrators of crimes against international law. It does not have the resources to deal with the much larger number of rank-and-file offenders. Likewise, the ICC only considers the guilt of individual offenders and is not a venue for establishing state responsibility for crimes. Also, contrary to the yearning of the Ukrainian public for swift justice, trials conducted by the ICC are costly and time-consuming. Finally, the court does not yet address the crime of aggression. Even if Putin stood trial, he could not be prosecuted for the Russian aggression against Ukraine.

Most importantly, Ukraine is not yet a party to the ICC’s Rome Statute, a treaty that specifies the court’s functions, jurisdiction and structure. It means that it does not enjoy all the rights of a member state, such as sending its judges and other representatives to the court, participating in the Assembly of States Parties, or asking help of the court at any time. At the same time, Ukraine recognized the jurisdiction of the ICC ad hoc, without becoming a full member. By doing so, Ukraine has put itself into an awkward position: the ICC has full jurisdiction over any international crimes committed in Ukraine after November 21, 2013—the beginning of the Euromaidan. Yet, not having ratified the Rome Statute, Ukraine does not enjoy all the privileges of a member state. Nor will the current delay in ratifying the statute, as some seem to assume, protect Ukrainian army personnel, since the ICC already has the ability to bring charges against Ukrainian servicemen under the terms of Ukraine’s partial recognition of its authority. Kiev’s delay of the ratification of the Rome Statute therefore does little more than generate an international misperception that Ukraine has something to hide.

Only those states that have ratified the Rome Statute—currently 124 in total—are full members of the ICC. While the Ukrainian government did sign the Rome Statute in 2000, the Constitutional Court ruled a year later that the signing was unconstitutional. Most recently, and despite numerous appeals from civil society and the international community (ratification was one of the EU’s stipulations for signing its Association Agreement with Ukraine), the Ukrainian parliament has voted to postpone ratification by another three years.

Kiev instead prefers to call on the ICC selectively when it sees an opportunity in the ongoing propaganda war between Ukraine and the Russian Federation. On the basis of two declarations issued by the Ukrainian parliament in 2014 and 2015, the Ukrainian government has granted the ICC ad hoc jurisdiction over all international crimes that have taken place on Ukrainian territory since November 21, 2013. A country can ask the ICC to look into possible international crimes committed on its territory without ratifying the Rome Statute and becoming a full member of the court. Some human-rights activists, whom one of us has interviewed (and who prefer to remain anonymous), suggested that Ukrainian authorities involved in the decision-making process, such as the president and his administration, want to preserve an escape hatch. They would like to keep an option to withdraw ICC’s jurisdiction, if things don’t turn out as planned. However, in fact, it is impossible to withdraw from the ICC’s jurisdiction once the court has opened a case.

This, and statements by members of President Poroshenko’s party and the Council on Security and Defense, demonstrate more than just a lack of political will to resolve the issue at hand. They also illustrate a poor grasp of international criminal justice mechanisms—not only in Ukraine’s governing coalition, but also in the opposition. Thus a member of Ukraine’s parliamentary Supreme Council recently complained that a draft law on the ratification of the Rome Statute was being blocked by the Parliamentary Committee on Legal Policy and Justice, headed by a deputy from the presidential Petro Poroshenko Bloc. The critic alleged that President Poroshenko was not interested in ratifying the Statute of the International Criminal Court for fear of being held responsible for Ukrainian military casualties incurred due to his incompetent leadership.

A more plausible (and official) reason for the reluctance is that Ukraine risks too much by becoming a full party to the ICC while at war. According to this interpretation, Kiev fears that it would expose itself to Russian legal harassment in the ICC, especially when there is credible evidence that Ukrainian forces are responsible for violations of international humanitarian law. The assumption of a Russian legal-political campaign against Ukraine in the ICC is not without merit: in the aftermath of the Russian-Georgian War of 2008, Tbilisi became the target of a wave of mostly frivolous Russian motions filed in the court. Human-rights activists interviewed by the author suspect that Poroshenko’s various Georgian advisors are responsible for his reserved attitude towards ratification of the Rome Statute. Yet the negative consequences of Georgia’s ratifications of the Rome Statute may be overestimated in Ukraine’s presidential administration. Although Russian organizations submitted copious documentation to the ICC, the court has not sided with Russia.

Ukraine’s newly appointed chief prosecutor, Yuri Lutsenko, has announced that full ratification must wait until the end of hostilities. In his words, “now we have to fight, and not go to court and collect evidence.” While such approaches are obviously apologetic, Ukraine’s critical situation is indeed one of the reasons for the grave shortcomings in Kiev’s criminal investigation and legal persecution of numerous crimes related to political events and committed since November 2013. Both the state apparatus’s energy and civil society’s attention have, for the last two years, been focused on defense-related efforts, and on fighting the serious humanitarian, economic, social and other repercussions of Russia’s “hybrid war” against Ukraine. Without Moscow’s ongoing low-intensity warfare in the Donets Basin, constant saber rattling on the Russian-Ukrainian border and other various other measures targeted at undermining the Ukrainian state, we would have undoubtedly seen more or even much more progress in the persecution of various war, hate and other political crimes since the Euromaidan.

Another possible reason for the government’s reluctance to ratify the Rome Statute is the fear of upsetting already heavily antigovernment nationalist groups involved in Ukraine’s defense efforts in the Donets Basin. Proposed changes to the constitution and the prosecution of marginal radical rightists already provoked violent protests in Kiev in summer 2015. The Deputy Head of the Presidential Administration has publicly voiced concern that recognition of the jurisdiction of the International Criminal Court entails certain political risks for Ukraine. He referred to potential prosecution by an international institution of Ukrainian military personnel who are seen by segments of Ukraine’s politicized public as heroes and patriots, yet may still be guilty of grave war-related transgressions, like the killing or torture of POWs, looting, rape and so on. ICC proceedings could, it seems to be the authorities’ reasoning, further radicalize the numerically small, but already dangerously unhappy, violence-prone and partially armed segment of Ukraine’s nationalist scene.

And yet, without ratifying the Rome Statute, Ukraine cannot indefinitely request help from the ICC on a piecemeal basis. Even worse, Ukraine has put itself into an awkward position by involving the court. After respective Ukrainian government declarations, the ICC already has full jurisdiction over any international crimes committed in Ukraine after November 21, 2013. Yet Ukraine does not enjoy all the privileges of a member state, nor will it be able to prevent the prosecutions of Ukrainian army personnel. Ukraine’s inconsistent position only gives the appearance of guilt. For these reasons among others, Ukraine should follow its otherwise generally monistic approach to international law with regard to the ICC, and fully ratify the Rome Statute as soon as possible.