If You Want Good Leaders, Make Sure They're Good Thinkers 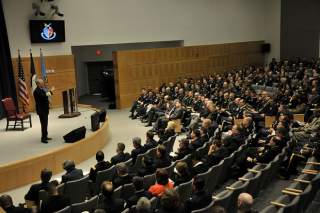 Here’s a thought. Perhaps part of the reason the world seems to have gone haywire for America is that our nation’s leaders don’t think as well as they used to—that all our great thinking is behind us. The best prescription for fixing that may lie in how we prepare generals, diplomats and policymakers to lead.

Even during the Cold War, America’s best and brightest weren’t always at their most cool-headed. Remember the Bay of Pigs? Not the smartest move ever. Lyndon Johnson’s war? That didn’t go so well. There is a long list of other tragic misjudgments, dictator coddling and dirty tricks.

On the other hand, from George Kennan’s strategic vision in the Long Telegram to Ronald Reagan tying Moscow in knots, there were certainly bright spots. On balance, America didn’t make out so bad. The U.S. ended the Cold War stronger than when it started. The world was richer. There were more democracies.

Now Americans look back at the promise of a world that seems far out of our reach today.

Not that the downturn of the last several seasons cannot be blamed just on bad reasoning from Washington. A great deal of creative disruption has been unleashed on the world during this time, from the rise of Silicon Valley to the unleashing of the Arab Spring. And, of course, the enemy gets a vote, no matter how carefully we plan our moves.

That said, our choices do matter. From responding to 9/11 to the Asian Pivot, our choices have helped shaped the modern world. After all, the U.S. started the post–Cold War era like a marathon runner with a commanding lead. Losing the lead is as much about the frontrunner slowing down as it as adversaries catching up.

If there is a vacuum in the post–Cold War mind, there are many lining up to fill it. In their article “Delusions of Grand Strategy,” Professors David Edelstein and Ronald Krebs attack the process. “The strategizing ritual contributes to an overwhelming sense of insecurity,” they argue. “The country would be better off without it.”

But this critique falls well short. There is a difference between the process being the problem and the problem being that the process is poorly implemented. Edelstein and Krebs don’t make a convincing distinction.

In his classic “The Rise and Fall of Strategic Planning,” Henry Mintzberg detailed all the pathologies that can send a well-meaning strategic planning exercise off the rails. There is more reason to suspect that these failures are at the root of the problems that perplex Edelstein and Krebs.

Further, “Delusions of Grand Strategy” doesn’t offer much of a prescription for deep thinking. Edelstein and Krebs argue that deep thinkers need to be “pragmatic.” That suggestion isn’t much help. What policymaker does not think they are pragmatic? And “pragmatic” is just another subjective construct that shallow thinkers can use to justify any nutty idea they have.

There is a case to be made for focusing on people over process. If general, diplomats and other policymakers are solid thinkers the process will yield to their wisdom rather than leading them, lemming-like, into bad places.

Describing what makes a good deep-thinking team is one thing; finding and harnessing that talent is another.

For starters, the U.S. government could have better means for developing human capital within government, and for crafting careers that prepare military and civilian leaders to operate effectively in complex, difficult environments.

More attention, however, should be paid to the education that fuels the intellectual development of future deep thinkers. That could be the taproot of where Washington is really going wrong.

To be blunt, how Washington thinks stinks. The latest round of conjecture overanalyzing ISIS is a case in point. Max Abrams argues in the Harvard Business Review that there is more cognitive dissonance than cogitating among many experts, who confidently explain what the terrorists are up to after assessing virtually no evidence.

The irony here is even as science is making remarkable strides in understanding how the brain works, we’re doing very little to apply that teaching to people who decide when to make wars, invade countries and negotiate with dictators.

Daniel J. Levitin, a cognitive neuroscientist at McGill University, in his book The Organized Mind, for example, summarizes the current state of neuroscience discoveries and explains how a better understanding of how the brain works can be used to cope with the challenge of too much information. The book “stresses the many ways in which evolution designed our minds to succeed in an environment that was utterly unlike the world of information overload we now face,” writes Levitin.

Sadly, Washington seems too busy to take time to think about handling the problem of being too busy. Officials spend too much time swimming in a mass of information than determining how to master the tsunami of knowledge they are drowning in.

The result is junk food thinking, a default towards the simplest and most mentally comfortable assessments. Even when there are more sophisticated methods for dissecting the complex, nonlinear problems that policymakers face today, they are not utilized nearly enough.

Throwing a life raft to our drowning decision-making corps starts with recognizing the importance of a deep-thinking education. In the interwar years, writes H. W. Crocker III in The Yanks Are Coming!:

“It was not a pleasant time to be chief of staff. MacArthur wanted a larger Army. But in the Great Depression, and with budget-minded Republicans in office and Herbert Hoover (whom MacArthur liked) as president, he had to find creative ways to protect what was most essential in the Army budget. To MacArthur, the priority was not guns and trucks and planes -- which could be manufactured by industry in due course -- but an educated officer corps, without which an Army was nothing. MacArthur always believed that it was the human element, the moral element, that was vital…”

We need a similar prioritization in our times.

Next, the quality of the education matters. Here both form and content have to be addressed. It might be “deeply unfashionable,” writes Molly Worthen, but emails, Facebook, blog posts, videos and PowerPoint slides aren’t good tools for teaching deep thinking. Daniel Levitin comes to the same conclusion in his book. Deep thinking is stimulated by prolonged attention to a subject that requires activities such as reading books; listening to live, interactive lectures; and experiencing Socratic teaching. If school officials are not building programs around these time-consuming, contemplative and challenging activities, they are just delivering diplomas.

As for content, when it comes to educating deep thinkers, the current vogue of chasing the next big thing (the hot language or regional studies) has to change. It is fruitless to try to foresee exactly which kinds of leaders, language skills and geographic or operational orientations will be needed to address future problems. The attribute most needed is critical thinking skills, which come from a quality graduate education program.

Thinking skills are the best preparation for ambiguity and uncertainty. And that ought to be built around a core of history, moral and political instruction; the complexities of modern science; and sophisticated methods of public policy analysis.

Arguably, too few graduate programs around the country are delivering the kind of deep thinking education that is needed, and there are too few effective government programs to identify, nurture and produce effective deep thinkers for federal service.

Addressing these challenges may not solve the Syria crisis today, but it may well help our nation’s leaders master the next mess over the horizon.

James Jay Carafano, Ph.D., is vice president of the Kathryn and Shelby Cullom Davis Institute for National Security and Foreign Policy and the E. W. Richardson Fellow at The Heritage Foundation (heritage.org).