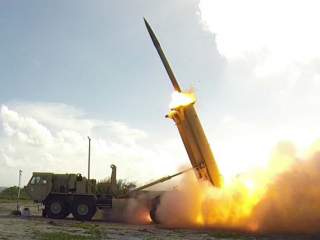 In the aftermath of a series of North Korean nuclear and ballistic missile tests beginning in January, the United States and South Korea announced formal talks in February on deploying the Terminal High Altitude Area Defense (THAAD) system in South Korea. China opposes the deployment, as it views any U.S. regional missile defense system in the region as aimed at them. Given developments in the nuclear and missile threat from North Korea, the United States should deploy two THAAD batteries in South Korea. THAAD would significantly improve South Korean and United States Forces Korea (USFK) missile defense capabilities, and push China to restrain North Korea from further aggression.

Tensions have heightened on the Korean Peninsula since North Korea conducted a nuclear test on January 6—its fourth test since 2006—and joint U.S.-South Korea military exercises began in March. On April 3, North Korea launched four short-range missiles off its west coast as part of its own military exercises. The latest provocation follows two similar ballistic missile tests in March, as well as a satellite launch in February. After the first test in March, North Korea also claimed it had miniaturized nuclear warheads to fit on a ballistic missile. An anonymous South Korean official said on April 5 that South Korea believes the North has the ability to mount a nuclear warhead on its medium-range ballistic missile, the Rodong-1. In response, the United States and South Korea began discussions to deploy the U.S. Army’s Terminal High Altitude Area Defense System (THAAD) on the peninsula.

The United States has a range of options to respond to the North Korean threat. First, it can deploy two THAAD batteries to South Korea. USFK would agree to operate both batteries in order to reduce South Korean cost sharing. Adding the THAAD system to South Korea’s missile defense system would create a multilayered shield against North Korean nuclear missile attack. THAAD’s advanced radar, the AN/TPY-2, would also help defend the United States from a future North Korean intercontinental ballistic-missile threat. On the other hand, deploying THAAD over China’s objections may dissuade China against cooperation on North Korea and other issues. Beijing could reverse its February decision to apply sanctions against North Korea, or refuse to effectively enforce them. China could also retaliate by deploying additional military assets to the East and South China Seas.

The second option is refraining from deploying THAAD batteries to South Korea, but assisting South Korea in developing its own long-range surface-to-air missile (L-SAM) system. The United States could provide funding and technology transfers to South Korea in order to expedite the development of South Korea’s L-SAM system, which is expected to be completed by 2023. Assisting the South Korean program undercuts China’s security rationale for opposing increased missile defense capabilities on the Korean Peninsula, because China primarily opposes deployment of the AN/TPY-2 radar system. Completion of the L-SAM would also free the United States’ limited number of THAAD batteries for deployment in other strategic locations, such as Europe. The problem with this option is that the Korean Air and Missile Defense system is meant to intercept longer range missiles. Relying on the L-SAM makes South Korean vulnerable to projectiles fired from North Korea’s large-caliber multiple-rocket launchers. Additionally, even with U.S. assistance, the L-SAM would likely not be deployed for two to four years, leaving South Korea without a defense against North Korean attack.

The third and least likely option is to not increase U.S. or South Korean missile defense capabilities on the peninsula. The United States could refrain from such action in exchange for China moderating North Korean behavior. Such a policy would largely rely on sanctions, but international sanctions will only alter North Korea’s behavior if China fully cooperates in implementing them. China may be persuaded to more fully apply sanctions in exchange for the United States not strengthening South Korean missile defense capabilities. Moreover, refraining from such action would improve U.S. and South Korean relations with China and may moderate China’s behavior in East and Southeast Asia. Despite these possibilities, South Korea would remain susceptible to a North Korean ballistic missile attack. In addition, historically, and especially since Kim Jong-un came to power, China has been unable to meaningfully influence North Korean behavior. Thus, there is little evidence to show China could restrain North Korea—even if it wanted to.

After examining these policy options, it is clear that the United States should deploy THAAD batteries to South Korea. THAAD’s superior maximum range and altitude would significantly increase South Korea’s missile-defense capabilities. Deploying THAAD is imperative because of improvements in North Korea’s ballistic-missile and nuclear-weapons capabilities as well as its provocative and unpredictable behavior. THAAD deployment may also lead to greater Chinese pressure on North Korea to curb its nuclear and missile threats. China must be made to believe that continuing to permit North Korea’s dangerous behavior will have serious consequences for its own national security. THAAD addresses both the United States and South Korea’s security concerns, and can change the diplomatic calculus of both North Korea and China for the better.

Michael Casey is a graduate student in security policy studies at The George Washington University Elliott School of International Affairs.