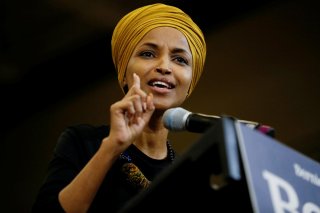 Rep. Ilhan Omar’s (D-Minn.) reelection campaign launched a fundraising blitz Wednesday in hopes to raise $150,000 after Republican efforts to strip her of her House committee assignments ramped up over the congresswoman’s past inflammatory statements.

Omar’s fundraising push comes after Rep. Marjorie Taylor Greene (R-Ga.) rolled out a massive initiative to raise funds—where Greene has already collected at least $160,000—to fight off a similar battle that Democrats ignited against the Georgia congresswoman that seeks to strip her of her assignments from House committees.

“Let’s be clear: This resolution to remove Ilhan is rooted in racism, xenophobia and anti-Muslim bigotry and we must call it out,” the fundraising email states, first reported by Fox News. “Taylor Greene is raising hundreds of thousands of dollars off of it. So, we've set a goal to raise $150,000 in the next 48 hours to fight back.”

The GOP-counter to blast Omar follows bipartisan pressure to penalize Greene for her violent and racist rhetoric and past support of QAnon conspiracy theories.

In the past, Greene has “liked” social media posts calling for violence and brutality against Democratic congressional leaders, specifically House Speaker Nancy Pelosi (D-Calif.). She also formed conspiracies such as space lasers being the cause of the deadly wildfires that rampaged across California and argued that deadly mass school shootings were staged. At one point she called a Parkland school shooting survivor “#littleHitler.”

“Marjorie Taylor Greene has incited violence against her fellow members of Congress, repeatedly singling out prominent women of color,” Omar, who is Muslim, said in a statement Wednesday. “She actively encouraged the insurrection on the Capitol that threatened my life and the life of every member of Congress, and resulted in multiple deaths. She ran a campaign ad holding an assault rifle next to my face.”

Green has previously suggested that Muslims don’t have a place in the U.S. government and that Omar and Rep. Rashida Tlaib (D-Mich.) should retake their oaths of office on the Bible.

Democrats and even some Republicans have pushed House Minority Leader Kevin McCarthy (R-Calif.) to remove her post on the House Education and Labor Committee and the Budget Committee, largely due to her Parkland remarks.

“Leftist Members of Congress have advocated for violence, anti-Semitism, anti-law enforcement, & other sentiments that have violated rules of decorum & principles of American decency,” Biggs tweeted Wednesday. “That’s why I’m calling for Rep Omar to be removed from her committee.”

Republicans have pleaded that Omar has made anti-Semitic comments, including in her February 2019 tweet that said “It’s all about the Benjamins baby,” in response to McCarthy’s pledge to punish Omar for her criticism of Israel. The tweet spurred backlash from both sides of the aisle, prompting her to apologize and thank colleagues for “educating [her] on the painful history of anti-Semitic tropes.”

A bipartisan resolution in the House passed in March 2019 after Omar made the remarks on Twitter, where the resolution condemned anti-Semitic behavior and other forms of hatred. The Minnesota congresswoman, however, was not specifically targeted within the resolution.