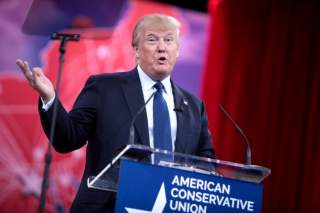 In Rolling Stone’s recent profile of Donald Trump (the one that generated the controversy over Trump’s denigration of Carly Fiorina’s face), there’s an anecdote worth noting for anyone interested in speculating on what kind of president ‘The Donald’ would be should he actually manage to parlay his novice-political bombast into a White Housed victory. At a rally at Hampton High School in New Hampshire, Trump rails against Ford and Nabisco for transporting manufacturing facilities to Mexico, thus vaporizing U.S. jobs. He won’t stand for it, says Trump. He won’t even eat Oreo cookies anymore, and he loves Oreos.

Later, aboard his huge and lavishly appointed Boeing 757 sky castle, he wolfs down a take-out dinner as he watches the political coverage on his vast TV screen. Looking to cap the meal with something sweet, he wanders back to the galley, “where his beloved Oreos live,” writes the author of the profile, Paul Solotaroff. He picks them up, eyes them longingly, then replaces them on the shelf and settles for a couple Vienna Fingers, made by pristine Keebler and not the foul Nabisco. Returning to his seat, he declares to Solotaroff: “I meant what I said: No more Oreos for Trump!”

Somehow this rings true as a reflection of who Donald Trump is and how he would conduct himself should his political pursuit take him into serious campaign success. He won’t trim. He won’t say one thing and do another. He won’t bow and scrape to anyone—not the big-money boys who own the other politicians, not the special interests taking their financial cut at every turn, not the industrialists (like himself in the past) exploiting the system of crony capitalism and pay-to-play politics, not foreign leaders taking advantage of America’s soft and accommodating national temperament.

Trump has positioned himself as the champion of ordinary Americans who can see that the game is rigged—in favor of rich corporations with their hands out, growing numbers of illegal immigrants who flout U.S. law with impunity, politicians who entrench themselves into their jobs through gerrymandering and campaign-finance manipulations. He is the Willie Stark of today’s politics, promising to retrieve the wayward system and give it back to the people.

And he means it. Back in New Hampshire, a converted Democrat named Dino told Solotaroff, “He means what he says, and says what he means. The other guys, they got marbles in their mouth—you don’t even know what they’re saying.” Dino seems convinced that, should Trump become president, he will shake things up. And he’s probably right. It isn’t clear the American people actually want things shaken up in such a manner—or, if they do, that they will want Trump to do the shaking. No votes have been registered, and Trump has a long road ahead just to get past the first nomination tests in Iowa and New Hampshire. But if, perchance, he actually makes it to the White House, we can anticipate some consequences.

Start with the issues he has chosen to emphasize. Though the commentators are correct in noting that there is a lack of specifics in his advocacy, his cluster of issues is noteworthy as an unusual mix in contemporary politics. America today is in a crisis of political deadlock, with partisan groupthink driving both parties to such an extent that collaboration and compromise have become impossible. Trump busts through this groupthink confrontation by attacking elements of both sides—and embracing elements of each.

He embraces thoroughly conservative positions in wanting to eliminate corporate taxation and the estate tax. He despises Common Core and attacks the teachers unions. He declares climate change a hoax. He actually wants to pay off the national debt. He advocates big increases in defense spending. And of course he wants to wall the country off against illegal immigrants and somehow push out of the country those illegals already here. These are standard Republican positions, though he pushes some of them (immigration, taxation) beyond most Republicans’ conventional sensibilities.

Now consider, as an example, his call to eliminate the national debt. It hasn’t been done since Andrew Jackson in the 1830s. And when was the last time you heard a prominent American politician of either party even hint that it could be remotely possible to eliminate the debt—or even desirable? Trump believes that by saving the huge amounts of money now going into servicing the debt, the country would be able to invest more in infrastructure such as roads and bridges. Americans want their crumbling infrastructure tended to, so this seems to be smart politics. Beyond that, he warns that the debt has approached such levels that it could, in itself, pose a serious threat to the financial health of the country. That’s true—and smart economics.

But here’s the kicker: Trump in the past has advocated a one-time 14.25 percent tax on the nation’s wealth to pay down the debt. He says the wealthy won’t suffer so much because they can afford it and the hit will be offset by the elimination of estate taxes. No other Republican would allow himself to contemplate even a wisp of a thought of this kind. One can argue, and many Republicans would, that this kind of surtax on wealth could be devastating to the economy, and perhaps they’re right. But it contains a lot of political potency and demonstrates how Trump’s views could scramble up the old political fault lines and create new political syntheses and hence new political coalitions.

Beyond that, Trump embraces other conservative heresies that could stir the interest of non-conservative voters and thus contribute to the creation of new political battlements. He rejects austerity economics in pushing for vast spending increases on health care and for veterans and women. He refuses to entertain any serious curtailments in Social Security or Medicare payments. He would destroy the nation’s free-trade regimen by tearing up current free-trade deals and renegotiating them with far greater aggressiveness. He would increase taxes on hedge-fund profits. None of this comports with standard Republican orthodoxy; indeed, some of it seems like Bernie Sanders stuff.

What pulls together these disparate and seemingly contradictory policy prescriptions is Trump’s assault on the political class in Washington and the nation’s financial, business, and managerial elites. Trump argues that they have messed up America, squandered its resources, diminished its position in the world, left it dysfunctional and disoriented. Many Americans, perhaps most Americans, agree with him. That’s why the poll numbers of the three non-politicians in the Republican presidential field reach a collective 53 percent, according to a recent CNN/ORC poll.

Here’s where the famous Trump temperament comes in—his arrogance, self-absorption, pugnacity, and blunt-spoken ways. Should he reach the White House, there’s no doubt that all those traits will be directed against the political class and the national elites. “I’m owned by the people,” Trump tells Solotaroff. “I mean, I’m telling you, I’m no angel, but I’m gonna do right by them!”

Thus, in the event of a Trump presidency, we can anticipate a period of intense political warfare, with some of the highest stakes we’ve seen in American politics for many years. Those who resist him openly will be attacked personally with multiples of firepower. He will seek to work with Congress but will mercilessly slice up those who don’t go along. He will take on the bureaucracy like no president has in the history of the bureaucracy. He will negotiate with foreign leaders as he has negotiated for business deals—combining a friendly pursuit of the win-win with an implacable regard for American interests. All this will be cloaked in the famous Trump persona—mixing bombastic self-grandeur with an occasional coy self-effacement, laying out his aims and strategies as markers for combat, demonstrating a willfulness designed to weaken the knees of his opponents.

Would it work? In our presidential system, crises such as the current American crisis get solved through presidential leadership or not at all. But our system gives presidents serious leeway of action only when they manage to muster great waves of political sentiment descending upon Washington. Since the beginning of the Twentieth Century, only the Roosevelts and Reagan managed to do that with serious force.

It isn’t clear that Trump’s pugilistic brand of politics will generate such force, allowing him to break up the old fault lines and create a new governing coalition. It might not even get him past the early voting rounds in January and February of next year. But, even if he falters, he still might become a historical figure as a kind of forerunner of new political thinking needed by the country, rather like John C. Freemont in 1856, paving the way for Lincoln four years later; or Barry Goldwater in 1964, paving the way for Reagan in 1980.

It seems axiomatic that, while Trump may not be the man to bust up the old politics and produce a new cluster of policies to propel America into the future, somebody will. That’s because the current crisis of deadlock based on the old politics can’t continue indefinitely without the American people eventually taking control by calling forth some politician of the Willie Stark mode.