Imagine: Russia Unleashes a Major Incursion into Ukraine. How Does Trump Respond? 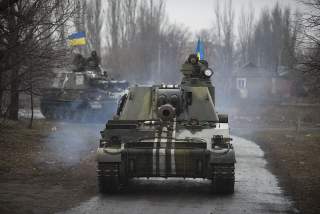 VIRTUALLY EVERY new administration is tested soon after it takes office. The April 1961 Bay of Pigs Invasion tested John F. Kennedy. Exactly four decades later, the collision of a U.S. Navy EP-3 aircraft with a Chinese J-8 fighter and its emergency landing on Hainan Island tested George W. Bush. It is therefore likely that someone, somewhere, will test Donald Trump’s mettle within months of his moving into the White House. Of all the possible events that could force the new president into choosing between unpalatable alternatives, a major new Russian thrust into Ukraine may well be the most demanding. A Russian incursion, with regular forces openly assisting rebels seeking to expand their control over the entire eastern portion of that country, might result from some actual or perceived anti-Russian provocation by right-wing elements in Kiev. America’s NATO allies would be shaken to the core and demand that Washington take the lead in response to what they will consider to be nothing less than outright Russian aggression.

Donald Trump is clearly committed to another “reset” with Russia, hoping that his efforts will lead to far greater success than the one Hillary Clinton, his erstwhile rival for the presidency, was able to achieve. During the presidential campaign, and since, he has made every effort to signal that he has no real quarrel with Russia in general and with Vladimir Putin in particular. He has not once criticized Putin for ordering the invasion and annexation of Crimea. Nor has he had anything to say about the Russian incursion into Ukraine. He has signaled that he could work with Putin to resolve any American differences with Russia over Syria. Indeed, unlike Barack Obama, he has not once called for the removal of Bashar al-Assad or his regime, and has never expressed concern over Russia’s construction of new air bases in Syria, or of its new arrangement with Damascus that enables it to hold the Tartus naval base in perpetuity (similar to America’s base at Guantánamo). Putin may therefore consider that with a friendly president in the White House, he could exert more control over eastern Ukraine and thereby cow the Kiev government.

The Trump administration will thus find itself on the horns of a serious dilemma. On the one hand, Ukraine is neither a NATO ally, nor a true American partner in any sense of the word. Indeed, it would be a stretch to assert that the survival of Ukraine as a wholly independent state is a vital American interest. Since any major American response to Moscow’s actions will doom the prospects of reaching any understanding with Putin over Syria, or indeed, any other matter, there will be a strong case for America to stand aside and not become enmeshed in a confrontation that would take place in Russia’s backyard. Those taking such a position could point to Dwight D. Eisenhower’s decision not to respond when the Soviets crushed the 1956 Hungarian uprising or to Lyndon B. Johnson’s similar decision when Warsaw Pact forces invaded Czechoslovakia a dozen years later.

On the other hand, NATO now includes many central and eastern European members—including Hungary and the Czech Republic (or Czechia, as the country now styles itself)—who would be terrified by a Russian incursion. America’s NATO allies would demand a strong and urgent American response, most probably in the form of an airlift of defensive and even offensive weapons, to a beleaguered Ukrainian army. There will likely be many voices in Congress, both Democratic and Republican, who will likewise demand a major weapons transfer to Kiev, to be accompanied by a not insignificant force of trainers, whether American and European military or contractors. In addition, Trump will be the subject of a new media frenzy, both in the United States and the world over: should he hesitate to move, and simply issue some statement condemning Moscow, he will find himself accused of the same weakness and passivity that characterized Barack Obama’s flaccid “red line” over Assad’s employment of chemical weapons against his own people.

If there is one thing that is undeniable about Donald Trump, it is that he reacts harshly if he perceives that others might see him as weak. He will therefore have to choose between his desire to work with Putin and his determination to look strong. Whatever that choice, it will not be a pleasant one. No doubt, deciding will keep him awake into those small hours of the night that the president-elect has normally reserved for his tweets.