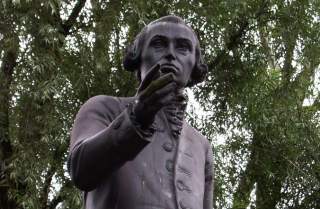 But what of democratic peace? Can the procedures of democratic decisionmaking offer a constitutional solution to the problem of war? This, too, seems to misunderstand Kant’s thesis. Although Kant does raise the hope that various political developments may abolish war, that is, by his own admission, “only opinion and mere hypothesis, and it is uncertain, like all theories which aim at stating the only suitable natural cause for a proposed effect that is not wholly in our own power.” Kant is, at most, a skeptical proponent.  His stronger claim, that republics cannot wage aggressive war, is not so much a claim about the empirical proclivities of democracies as it is a claim that the concept of a republican government excludes the motives of aggressive war from political decisionmaking. Kant’s conception of a republic, a Rechtsstaat, is not essentially democratic, but law-ordered, such that it only ever acts according to the public will. In such a state, in which the concept of law alone determines policy, there could never exist grounds for an aggressive war, since such a war would only be fought on the basis of sensuous inclinations not considered by a pure system of law.

Thus the idea of perpetual peace is simply a consequence of the idea of a republican constitution considered in connection with a world of other republican constitutions. In such a world, there is no motive for war, as each state aims only at the law. Yet, as soon as one state gives over to temptation, this strict compliance is threatened and competition resurges. Such a risk is an unavoidable stain upon the human condition, as Kant remarks that man is essentially prone to evil inclinations. The drive to sin is ineradicable, so we are left with the conclusion that “Human Nature appears nowhere less amiable than in the relation of whole nations to each other,” and, for this reason, “No State is for a moment secure against another . . . the will to subdue each other or to reduce their power, is always rampant.”

The alternative to a world federation is a balance of power, but this, too, is a “mere chimera” prone to instability at the slightest change. The balance of power is the only hope for peace, and, Kant claims, states are entitled to wage for its sake, but this is an ephemeral hope. History will be characterized not by a final stage of cooperation, but a succession of violent convulsions, the rise and fall of empires. We are left, at best, with a cynical liberalism, one steeped in an appreciation of Realpolitik.

Is this not cause for despair? Far from it—Kant tells us to appreciate the struggle, to assume a cosmopolitan view of history from which the seeming chaos takes on new meaning. The sublime nature of the human condition is not a static equilibrium, but a primordial discord of the soul, in the words of Faulkner, “the human heart in conflict with itself.” All great history is the unfolding of the spirit through its particular forms, a flux that must be seen as ordered by the light of universal law, and a universal that must be viewed as manifested in its particular flawed instances. Kant remarks that Nature employs this strife in order to draw out the capacities of man, raising him above the dumb animals by his being subjected to the struggle, from which he develops Kultur. Just as the pure form or concept—a universal beyond the world of appearance—must manifest itself in the multiplicity of particular objects to become actual, so too must the human spirit be instantiated in a rich diversity of civilizations in order to know itself as law. There is no tree apart from the plurality of existing trees, and yet they achieve their potential and grow taller only out of mutual competition for sunlight. So too does mankind perfect itself through antagonism, through “unsocial sociability.”

Within the movements of history, men act according to their own plans, without any grand design directing them, entering into conflict with one another. But, from the cosmopolitan perspective, seeming order emerges, or, at least, we become able to conceive of the fluctuations of the development of the human race in terms of such an orderly process. The ideal reconstruction of the instants of human development in terms of historical science involves, at each stage, rendering the individual act something more, a participation in a historical moment, reflecting the condition of spirit.

It would be the height of hubris to assume such a point of view in action, to take oneself to be the world-historical figure carrying humanity from one stage of development to the next. For, again, to do so would be to mistake the regulative for the constitutive, to take the idea to be operative in the world like the hand of providence. This is the failing of those who assume the end of history is in sight, and, worse, those who mistakenly assume that such an end can be brought about, not as an abstract goal of the human race, but as the project of some determinate generation. Perpetual peace is not an apparent reality, but an idea through which the developmental stages of humanity becomes synthetically unified in the history of the human race.

Far from a naïve Whig history, hurtling deterministically toward liberal utopia, Kant’s Perpetual Peace is but the form of history, the regulative idea that stands at the end of historical judgment and the guide of political practice. He is as much a skeptic as a rationalist, for whom the pure idea becomes real only in the endless unfolding of its particulars. Harmony is only manifested in its diversity, driven by strife pregnant with cultural significance. Thus, in Kant, we find not the philosopher of the end of history, but of history without end.