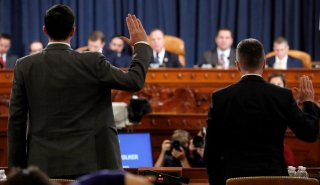 The impeachment saga did not take a fresh turn today. Instead, the testimony of the witnesses demonstrated that policy differences continue to becloud the hearings, obscuring the legitimate right of an American president to decree what policy should be toward a foreign nation. Despite the incessant efforts of congressional Democrats to tar Donald Trump with illegal actions, they failed to show that he was acting improperly in seeking to alter American policy towards Ukraine even if the government bureaucracy recoiled at a fresh approach.

The first witness was Jennifer Williams, who has served in the State Department for over a decade and was attached to the Office of the Vice President in the spring. She described the July 25 call (which she listened to in real-time) between Trump and Ukrainian president Volodymyr Zelensky as “unusual” because it mentioned “a domestic political matter.” Williams testified that she did not discuss the call with Vice President Mike Pence or his staff but did include a transcript of the call in the Vice President’s Daily Brief. It’s unknown at this time if Pence read the brief.

The other testimonial came from Lt. Col. Alexander Vindman, a U.S. Army officer positioned on the National Security Council (NSC) since July 2018. Selectively sensitive about his rank, Vindman corrected Rep. Kevin Nunes (R-CA) when the ranking member referred to him as “mister.” This clap-back moment immediately went viral on Twitter. Chairman Adam Schiff (D-CA) referred to Vindman as “colonel” numerous times without being corrected.

While sometimes protective of his rank, Vindman was rather more wishy-washy about his resume. Rep. Mike Turner (R-OH) read out the lieutenant colonel’s job description that had been submitted to the committee as “at the NSC I am the principal advisor to the National Security Advisor and the president on Ukraine,” along with coordinating Ukraine policy. Vindman said that while that was in the draft, he submitted it was not the description he had read into the record this morning. He had decided to “ease back” on his credentials since in actuality he was not the principal advisor on Ukraine, nor did he often advise the president. In fact, Vindman has never met Trump.

Even though he had never met him, Vindman was one of the participants on Trump’s July 25 phone call. “What I heard was inappropriate . . . It is improper for the president of the United States to demand a foreign government investigate a U.S. citizen and a political opponent,” Vindman testified.

Furthermore, Vindman spoke about a meeting between then-National Security Advisor John Bolton and his Ukrainian counterpart, which was also attended by Vindman, Rick Perry, Fiona Hill, and Ambassador to the European Union Gordon Sondland. Sondland said opening investigations into 2016 campaign interference and Burisma business dealings was key to winning an invitation for Zelensky to the White House. Bolton then ended the meeting. Afterward, Vindman told Sondland his request was “inappropriate and had nothing to do with national security.” He said Fiona Hill agreed with him. Hill is slated to testify on Thursday.

What stood out, however, was why Vindman felt Trump’s request was inappropriate. “It was also clear that if Ukraine pursued an investigation into the 2016 elections, the Bidens, and Burisma, it would be interpreted as a partisan play. This would undoubtedly result in Ukraine losing bipartisan support, undermining U.S. national security and advancing Russia’s strategic objectives in the region,” he said.

Once again, policy differences become the heart of the impeachment testimony. Taking a closer look at Ukrainian corruption and past, subversive actions might reveal to the wider public that the country is not the spotless angel its Washington-based promoters pretend it is.

Tim Morrison, a former presidential advisor on the NSC staff, testified later in the day alongside former Special Representative for Negotiations Kurt Volker. Morrison said that Ukraine is fighting Russia “over there,” so the United States doesn’t have to fight Russia “over here.” This concept of geopolitics is usually provided by freshman politicians, not experienced foreign policy hands.

Only Vindman’s earlier testimony seemed more trite. Before he was finished, the lieutenant colonel trotted out one of the most overused themes of the Trump-Russia conspiracy theory. “It is the consensus of the entire Intelligence Community that the Russians interfered in U.S. elections in 2016,” he said. In fact, this conclusion has not been reached by the U.S. Intelligence Community but by handpicked analysts from only four agencies. Responsibility for alleged election interference has never been given an intelligence review.

For his part, Vindman was quick to adopt the victim narrative after Democrats claimed Trump “intimidated” witness Marie Yovanovitch last week by live-tweeting her testimony. Yovanovitch had agreed that she had not suffered repercussions due to her participation in the impeachment inquiry. When asked by Rep. Jackie Spier (D-CA), Jennifer Williams agreed. But Vindman said he felt that he had been excluded from some meetings.

“You realize when you came forward out of a sense of duty, that you were putting yourself in direct opposition to the most powerful person in the world?” asked Rep. Sean Patrick Maloney (D-NY), stoking Vindman’s self-image of heroism. “I knew I was assuming a lot of risk,” Vindman responded to audience applause. What risk there could have been sitting in a chair for several hours answering questions went unsaid.

When asked if he was a “Never Trumper,” Vindman responded that he was a “Never Partisan.” In the same vein, Williams testified that no one she knew in the national security establishment wanted to withhold aid from Ukraine. That’s because the establishment is not partisan; it’s a monolith. The “foreign policy consensus” is precisely what Trump campaigned against in 2016. Both Democrats and Republicans, stuck in old paradigms of thinking, oppose any change.

So why does the Trump administration find itself in this predicament? It’s an open secret that Trump has summarily failed to communicate a new, official foreign policy when it comes to both Ukraine and Russia. The officials testifying last week and today agree with the president’s “official” policy of increased sanctions on Russia and military aid to Ukraine. What they disagree with are the unofficial backchannels through which Trump has tried to express his true intentions.

Trump needs to acknowledge the obvious: his woes are the logical consequence of three years of hiring failures and bad vetting.